The Road to Opening Night

Behind the curtains of Virginia Rep's summer musical, "South Pacific." 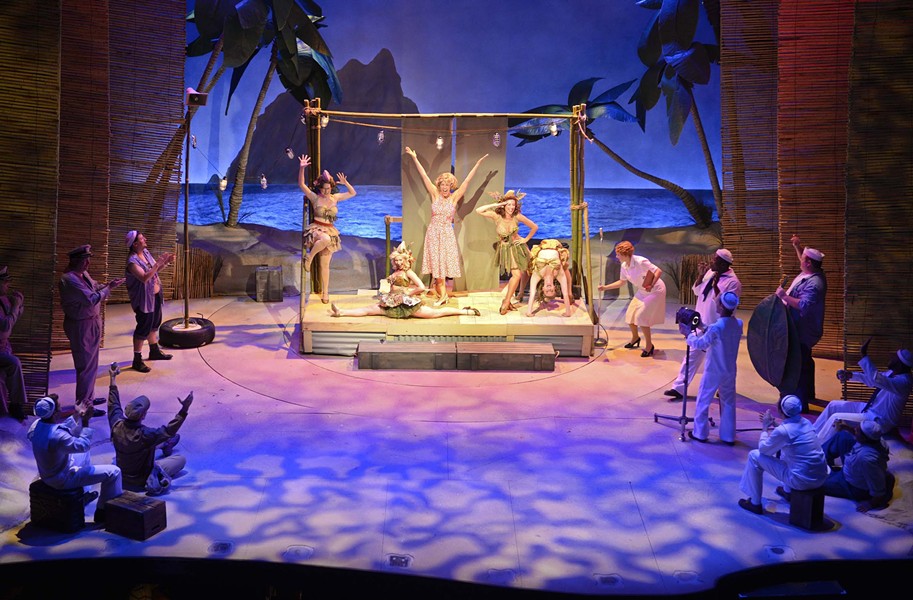 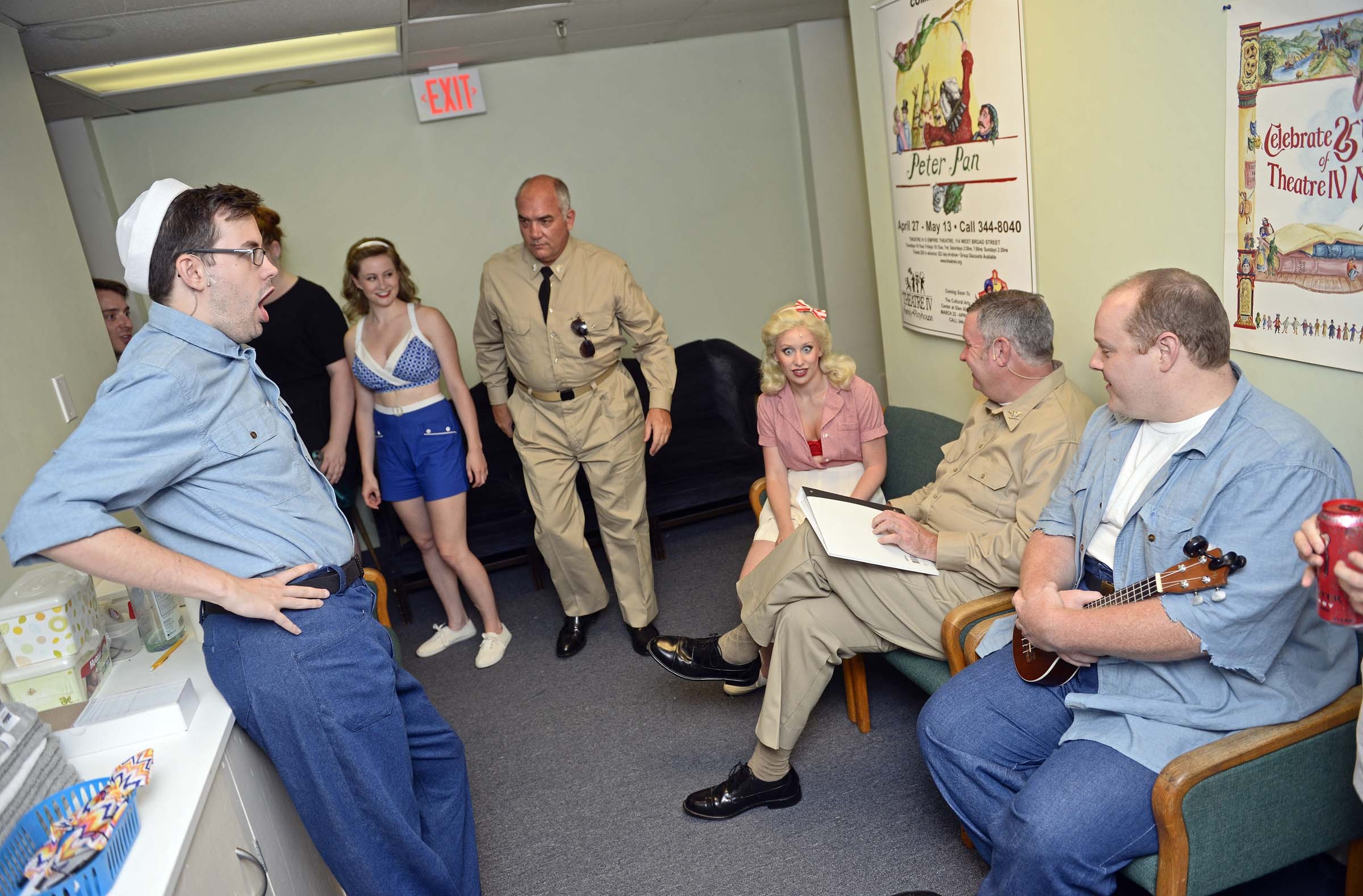 Like Maria in “The Sound of Music” — which was the first role Cabaj played in Richmond — the actress seems nearly too perfect. She seems to radiate sunshine from every pore, and she’s unfailingly nice in that stereotypical Canadian way.

She and her castmates have gathered around a long table for a read-through of the script. It’s June 2, four and a half weeks from opening, and this is the first time the whole cast has been together. Some are newcomers to “South Pacific” while others have performed the show multiple times. After opening remarks from Miller, company managing director Phil Whiteway, and technical directors, Kniffen takes the reins.

“When Rodgers and Hammerstein started writing this, it was their dream of what this country could be post-World War II,” he says before referencing the musical’s racial theme and the recent high-profile incidents between police and their communities.

Kniffen says the show’s characters Nellie and Lt. Cable are both faced with the questions of racial tolerance, before comically adding, “And the one who makes the wrong choice dies.”

The discussion then turns to everything he wants the cast to keep in mind throughout the performance. Current civil rights issues, the transition of Bruce Jenner to Caitlyn Jenner, and Nellie as a feminist hero are all mentioned before the cast launches into its reading. 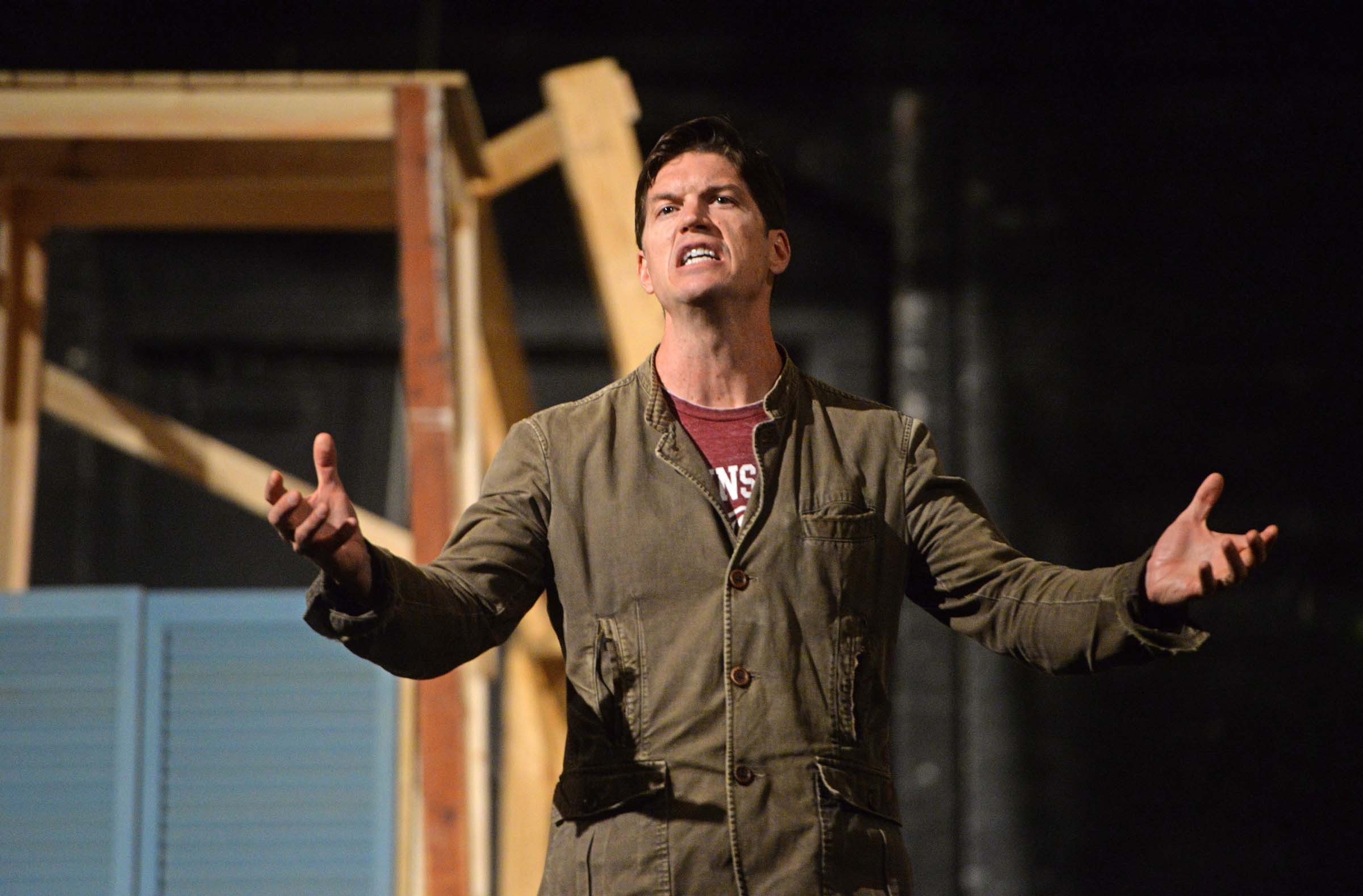 Already you catch a glimpse of what the actors have in mind to bring their characters to life. Branch Fields, who plays Emile, has a deep, French-accented voice down to a Pepe le Pew purr, and Cabaj has added a Southern lilt to hers. In the comic role of Seabee Luther Billis, James Stover has amped up his voice to cartoonish heights.

For Fields, a handsome opera singer who spent his teenage years in Williamsburg, it’s his eighth production of “South Pacific.” That includes being a standby for Emile in the Lincoln Center revival. Amy Jo Phillips, who plays the entrepreneurial island native Bloody Mary, estimates that this is her 12th time in the role. Her first production starred Robert Goulet.

Though the performers are singing at quarter volume during this read-through, chills seem to run through the room when the men launch into “There Is Nothing Like a Dame.”

“It still matters, it still resonates,” Phillips says of the show a few weeks later. “The big issues of course are love, personal growth and racial tensions — none of those have changed, unfortunately, in all these years. We are still dealing with the same issues.”

After months of blood, sweat and coffee, Kniffen is swaying his hips back and forth toward the audience.

While Dacus plays the piano, Kniffen is working out exactly how he wants his actors to hula dance. Either that, or he’s just having fun. Testing out his own ideas is something he’s known for — he wouldn’t ask an actor to do something he wouldn’t do himself. Potentially perilous activities, such as jumping onto a chair or standing on a moving staircase, are actions for which he willingly plays guinea pig.

In this show, he even offers to test the working shower in “I’m Gonna Wash That Man Right Outa My Hair” for Cabaj, but she waves him off. The technical crew was attempting to figure out how to raise the water temperature, and the cold deluge that ensued sent Cabaj out with a yelp and into a hug with Kniffen, getting him wet anyway.

Two days after the first read-through, the set is starting to shape up with faux sandbars built on the sides and back of the stage. Folks on the technical side have been at work for weeks; it’s the actors who are the new ones here.

On this day the cast is working on scene between the Seabees and Phillips’ Bloody Mary. With coffee in hand and a script sitting on a music stand, Kniffen is onstage and just as animated as his actors. When Phillips gives actor Jamari Johnson Williams a playful nudge, Williams improvises a bit where he falls backward off a sand dune. Kniffen likes the bit, and it makes it into the show.

“He isn’t a dictator. He loves hearing the ideas,” says Wendy Vandergrift, whom Kniffen has referred to as his right hand. “He’s great. He’s very easy to work with.”

Vandergrift has been with the company for 15 years, and ensures that all elements of design, direction and production run smoothly. Though she’s Virginia Rep’s production manager, she’s more frequently referred to as “a Wendy,” a role that supersedes her actual title. Should one of the company’s many shows hit a snag somewhere, Vandergrift is the one who makes sure everything gets back on track.

For this show, one such problem concerned bamboo. While enough bamboo was ordered to cover constructing legs — those long, thin curtains that frame the stage past the proscenium arch — there wasn’t enough to cover the rest of the show’s various set pieces.

Maymont Park came to the rescue, allowing the company’s technical crew to take chain saws to some of its bamboo thickets. Water from a recent rain had collected atop the bamboo leaves, ensuring that everyone involved was soaked by the end of the harvest.

Then the problem became the two different colors of bamboo. Dried bamboo, like the kind that had arrived from California, is yellow. The fresh bamboo is green, meaning they must either paint all the bamboo to match or figure out which set pieces to leave green.

They opt for the latter. When the Seabees construct a stage for the Thanksgiving Follies show, for example, it makes sense that the bamboo would still be green, as the musical’s characters would have recently chopped it down. 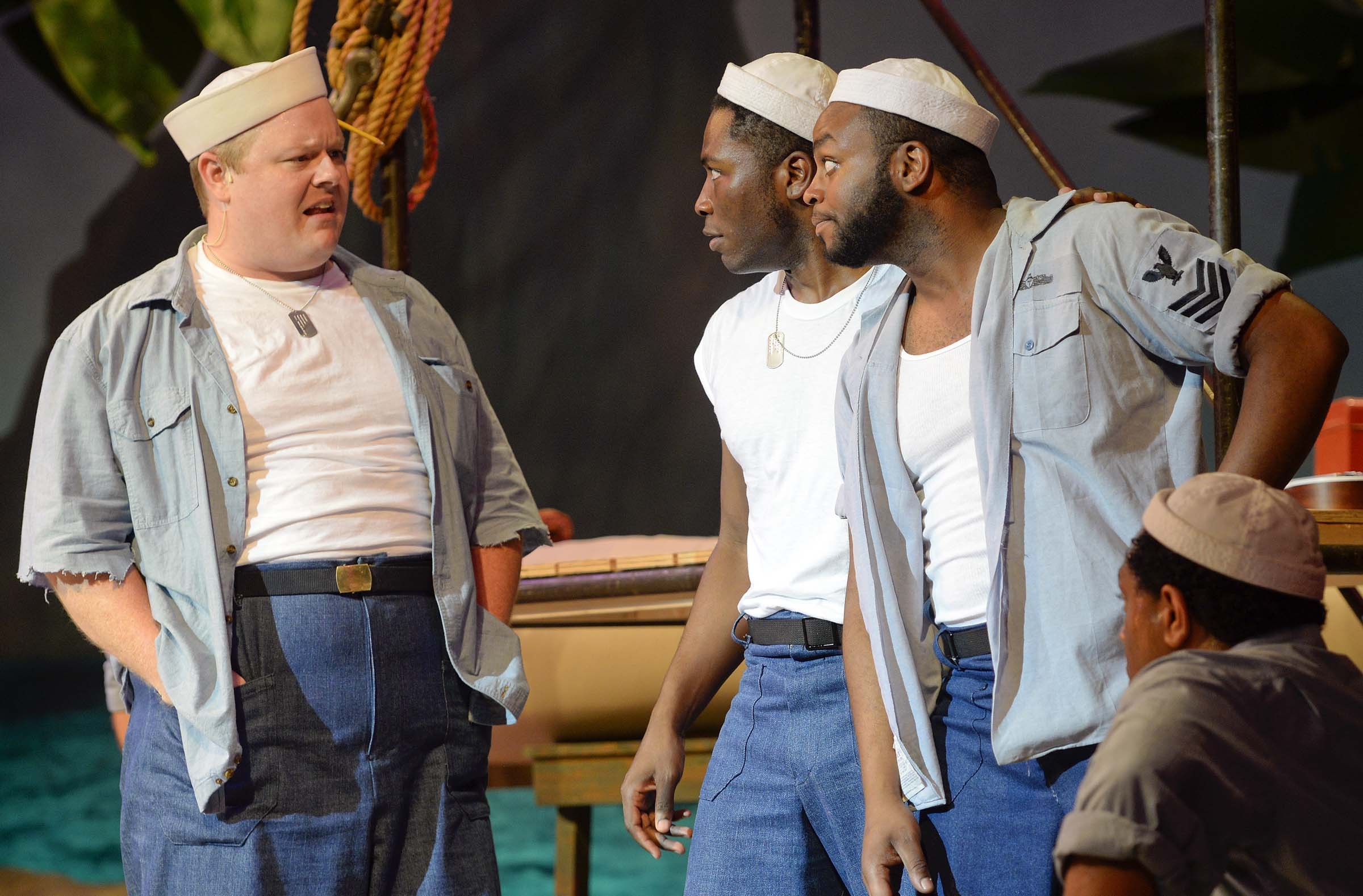 If this sounds like a bit over-the-top for such a detail, keep in mind that Virginia Rep is the largest and most professional theater company in town. It operates four stages in three locations, and including its partnership with Cadence Theatre Company, will locally produce 17 plays and musicals this coming season. The company also will send 12 touring children’s shows across the country.

Throughout the process, choreographer Brad Willcuts has been bouncing between Richmond and New York, where he’s serving as assistant fight director for the Broadway musical “Amazing Grace.” For “South Pacific,” he’s aiming for choreography that seems to organically come from the performers. He’s assisted by Rebecca Frost Mayer, who runs things when Willcuts is out of town.

To get the lighting in place for each scene, the actors will spend 16 dedicated hours onstage, pausing every few seconds so lights will focus on the right spot at the right level. The addition of the 10-member orchestra is the last step, added in the final week of rehearsals.

Further evidence of the company’s commitment to professionalism can be found across the alley from the November Theatre, at a space referred to by its address of “One-Ten,” or simply “next door.” Aside from a small workspace behind Virginia Rep’s Willow Lawn location, this is where most of the company’s sets are built.

If you need to paint a huge backdrop depicting the volcanic island of Bali Ha’i, this is the place to do it. One upper floor houses an estimated 5,000 costumes that the company has purchased or constructed through the years. The basement is filled floor to ceiling with stacked furniture. Props are housed on yet another floor. This is the result of decades of work, most of it overseen by Miller and Whiteway.

In 1953, six actors purchased Hanover Tavern across the highway from that county’s courthouse and started Barksdale Theatre. Separately, Miller and Whiteway founded Theatre IV in 1975, initially performing shows from the trunk of their car. The companies joined forces in 2001, and officially merged three years ago to create the juggernaut of Virginia Repertory Theatre. Now it’s planning a national search for Miller’s replacement. 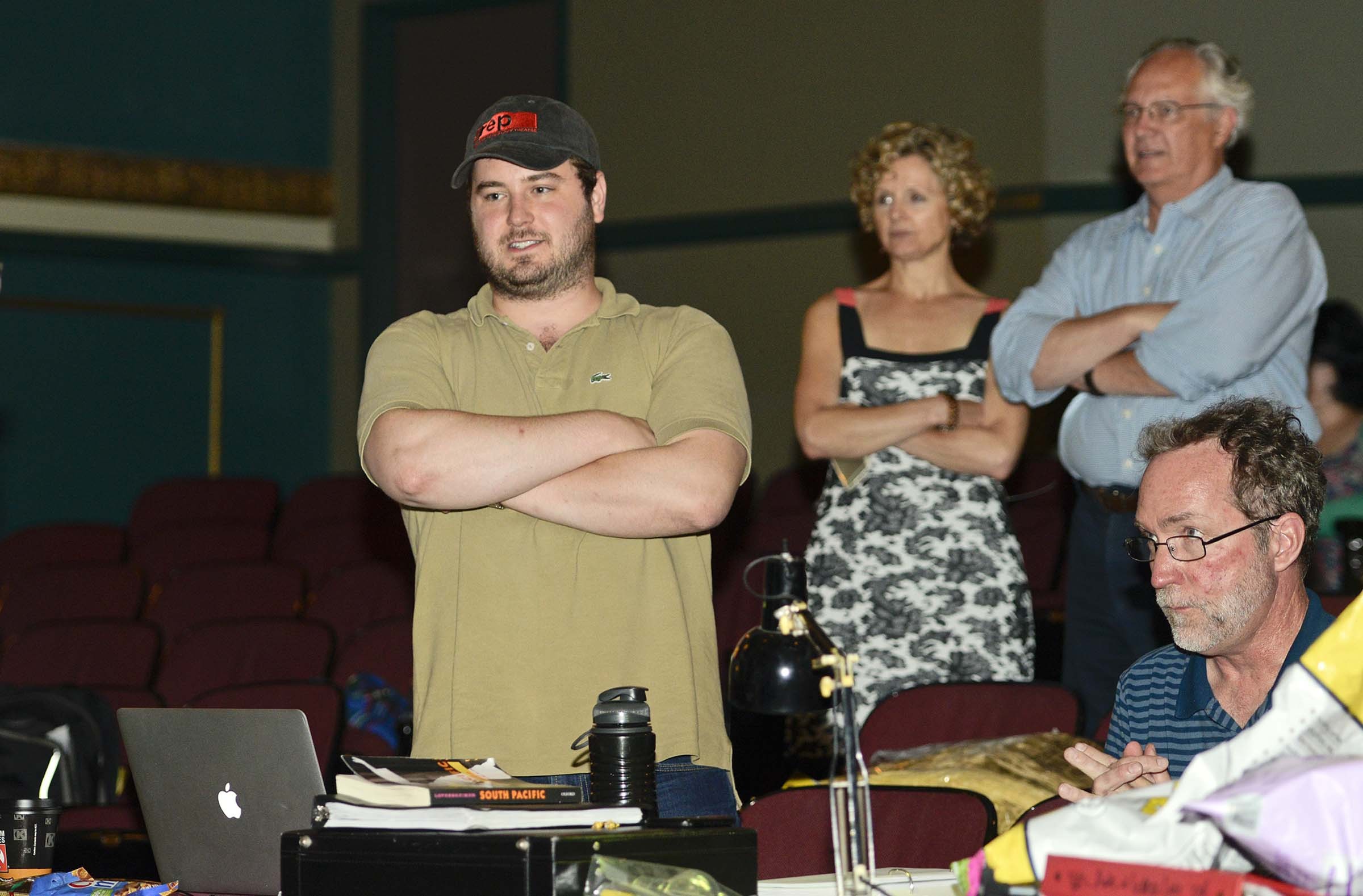 It’s a week and a half before the June 26 opening, and Kniffen is going a million miles a minute. He seems a little stressed, but happy in a delirious way. Walking quickly through the theater, he cracks jokes as fast as he can spit them out.

Today’s to-do list: shop for additional props and furniture, edit a television commercial, work on lighting and program a keyboard for the show’s piano conductor. Oh, and he has a rehearsal this evening.

“It’s just running around and not quite finishing anything, but trying to get everything going,” Kniffen says. “I’m tired. It’s 12-hour days, every day. I got home the other night at 9:30 on a Monday and went ‘Oh, it’s a night off.’”

Long days are common in the theater, and many of the show’s cast members rehearse all evening after working their day jobs. At this point, Kniffen says, the show is in fairly good shape.

“It’s kind of strange almost,” he says. “It’s because the actors are on top of their game. Most of the principals came in almost completely off-book” — meaning they’ve memorized their lines.

When asked about who might succeed Miller as artistic director, Kniffen answers carefully.

“It’s going to be an interesting two or three years of transition, and anytime you have someone like Bruce who has built this incredible thing step aside, there’s going to be a little shaky ground,” he says. “Whomever the person is, I think it’s a great opportunity to take the next step forward to expand the theater’s scope and national recognition and I hope to be involved. How about that?” he says, laughing.

“Bruce and Phil have been here forever, and have built this truly amazing thing. When we did ‘Color Purple,’ it was truly the work of 40 years to get to that point. It’s tons of years of work. It’s going to be an interesting time.”

It’s opening night, and the crowd is dressed to the nines. Parked outside of the November Theatre is 1942 Packard from World War II and people are snapping photos.

After months of focused effort, the house lights go down and the curtain goes up. S