While the city renews its love affair with the James, there's something you should know: It wants to kill you. 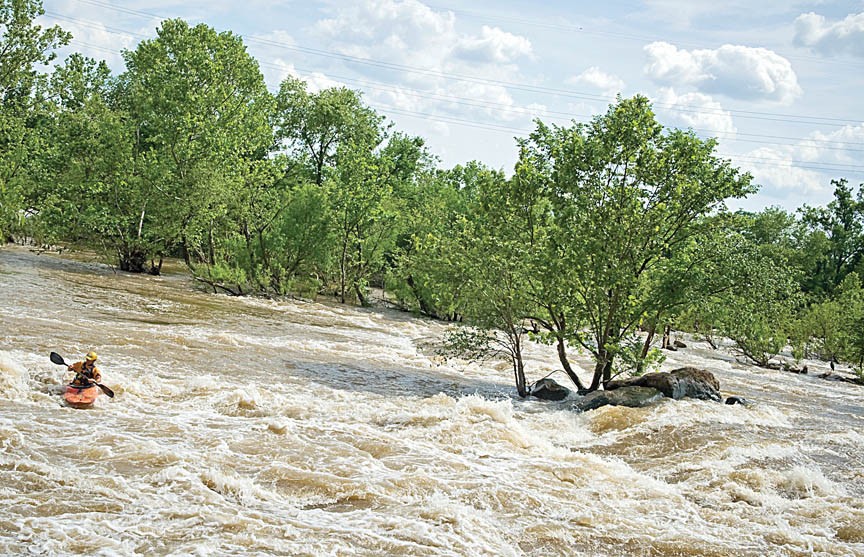 It was a very, very bad one.

On April 25, an unusually warm day in Richmond, the young man was hanging out with friends on the river when he saw a floating tree. Not a modest log. A 25-foot tree with a trunk this big around.

He decided to ride it down the river. Fun, right? Then he hit the First Break Rapids at the western end of Belle Isle. The massive tree swung around and slammed into a rock, pinning the man's foot. He was trapped.

Belle Isle bystanders, including a Roanoke firefighter, heard the man's screams and came to his aid. They brought him a lifejacket and called rescuers.

"It was an ugly situation," Greg Velzy says. He and a friend were the first paddlers on the scene. He says the man was so firmly pinned that there wasn't much they could do beside get a rope to him and let him know that rescuers were on the way.

The man stayed calm until the Richmond Fire Department showed up, Velzy says. "You could see the guy's eyes just go, 'Oh my God, I must be in a horrible position now, because these guys are all worried.'"

They were. They couldn't just yank the tree off him and let it float away, Battalion Chief John Harkness explains. "What's the current going to do? It's going to push it downstream and put it in the guy's lap."

Instead, rescuers rigged a line to pull the tree upstream. At least 10 firefighters and several bystanders pitched in to haul on the rope. "It was all we could do to get it up off of his leg," Harkness says.

With a tug, the tree rider was freed. Wearing no shirt and one shoe, he was brought to shore and taken to the hospital. Harkness, who has seen 30 years of river saves, calls it "probably the strangest rescue" he's ever witnessed.

After decades of neglect, the James is considered the best thing about Richmond. Visionaries believe it's the key to the city's revival. Kayakers revel in its wild rapids. For many, the James is their playground, the city's backyard pool. Plunking down on a sun-baked rock with a six-pack is a classic Richmond pastime.

But the more we celebrate the river, the more people forget how dangerous it can be. The James drops 100 feet between the Williams Dam and the Mayo Bridge, churning through rocks and creating white-water rapids.

"This is not Water World," James River System Park Manager Ralph White says. "This is not a Kings Dominion ride. This is the real thing. You can die."

The good news is that experienced river users are leaping in to help people in trouble. It happens with spectacular saves, like Tree Guy. And it happens every day, with rescues no one ever hears about.

The bad news is that people still die. In the last four years, at least 14 people have drowned in the James River. Some jumped. Some fell. Some were swept away.

Will the river ever stop claiming Richmonders' lives?

Thirty years ago, the James River was a rough and lawless place.

The water was polluted. The banks were jungled. Belle Isle was a haven for biker gangs to drink and do drugs. They'd throw bottles and rocks at firefighters who came to extinguish brush fires there, Harkness says. White recalls bikers boozing with floozies around the Pony Pasture Park area. A 1974 Richmond Times-Dispatch article describes "bands of roving youths" holding drag races and "wild and nude" parties near Williams Dam.

River accidents were a growing problem, and rescue operations were basic. In 1980, Harkness had just joined the Richmond Fire Department as a rookie. There was no dedicated rescue squad. There wasn't any fancy equipment, either.

"We had one inflatable boat and one metal V-bottom boat and one old civil defense-style vehicle," Harkness recalls. Kayakers often had to save themselves, hauling out stuck friends with ropes.

Around three to six people drowned in the James every year in the 1980s, White says. Some were kayakers who took risks. Some were young and ignorant of the river's dangers. "We used to have a senior drown almost every year," Harkness says, when local high-schoolers organized senior skip days in the spring at Pony Pasture.