While the city attempts to capitalize on the appeal of the James, a nagging problem persists: fishing in polluted waters. 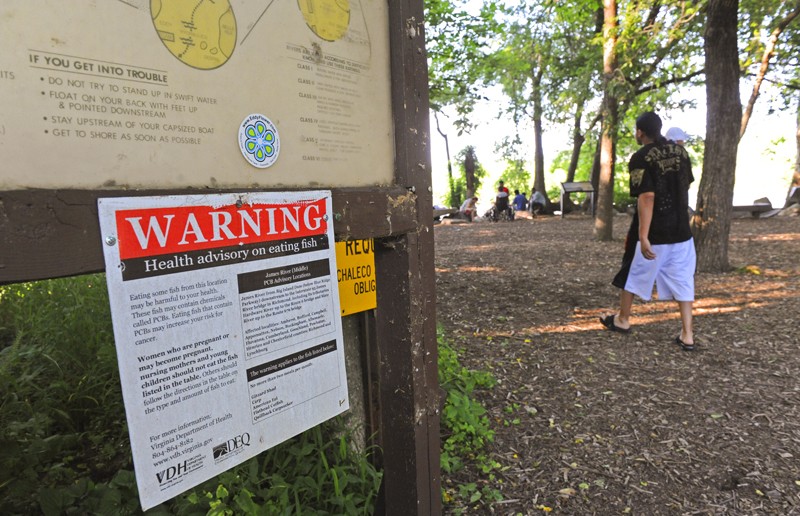 Stroll by any riverside pathway next to the James River and there, in bold letters, are signs warning people against eating the fish they might catch. Or, in some cases, to limit what they eat. The signs have been up since the 1970s and they are likely to be up 30 or more years from now. Some are written in Spanish.

The problem just won’t go away.

Polychlorinated biphenyls, or PCBs, once considered miracle chemical compounds that act as a coolant and resist fire, have found their way into the water in such quantity that the James River and its tributaries have been polluted for decades. Other chemicals also threatening water quality and fish are mercury, dioxin and Kepone, the notorious and now-banned pesticide made covertly in Hopewell and dumped into the James in the 1970s. Forty years later, it’s still a danger.

The nagging pollution flies in the face of efforts by Richmond’s business elite to rebrand the city as a destination for tourism, new corporate headquarters and young creative types. While they push the River City with its white-water rafting and sweeping vistas, somehow the issues with PCBs, Kepone and other pollution don’t get mentioned.

“It could be decades before we see much improvement,” says Bill Hayden, a spokesman for the state Department of Environmental Quality.

PCBs have been linked to cancer, according to the Environmental Protection Agency. Studies of workers exposed to PCBs show increases in rare liver cancers and malignant melanomas. Other studies have shown a variety of noncancer effects because of PCBs, including effects on the reproductive system and the nervous system. Children of mothers exposed to PCBs tend to have decreased birth weights as well as problems with motor skills and short-term memory, studies have found, effects that last for several years. Other noncancer effects of PCBs include decreased immune system responses as well as elevated blood pressure.

The biggest problem seems to be that PCBs, which are chlorinated hydrocarbons, don’t break down and lose their toxicity over time. They’re a bigger threat even than Kepone, Hayden says. Kepone is another chlorinated hydrocarbon that doesn’t lose its toxicity over time, and has been found in concentrated amounts in the James River south of Hopewell. Much of it’s been covered by river silt through the years, so few people know that it’s even there.

PCBs, by contrast, have been found in dangerous quantities in waterways that flow into the James, including Almond Creek, and Gillie’s Creek. In the James and Kanawha Canal levels have run as high as 18,000 parts per quadrillion, which is the level where the pollutants are likely to begin accumulating in fish, according to the state Department of Environmental Quality. The results are from tests conducted in 2009, the latest available. Normal levels are 640 parts per quadrillion.

PCB contamination was found to be far worse in Hopewell, which has long been clustered with chemical plants, including one formerly owned by Allied Signal, which manufactured Kepone. Levels as high as 233,000 parts per quadrillion have been found in some areas including Bailey Creek, Gravelly Run and Poythress Run. Tests, however, showed that levels of PCBs in the main shipping channel of the James were close to normal. Hayden says an updated survey is likely.

The most serious impacts are on bottom-feeding fish such as catfish, carp and blue channel bass — and the humans who eat them. “PCBs are lipid-soluble and they reside in fatty tissue, especially bigger fish that have been around for a longer time and have been feeding on the bottom longer,” says Dr. Dwight Flammia, a public health toxicologist at the Virginia Department of Health.

How much is dangerous? Researchers have yet to determine a level of PCB exposure that doesn’t cause health effects. In addition, the composition of PCBs changes once they’re released into the environment, and the PCB mixtures that accumulate in fish prove to be the most carcinogenic. People who consume contaminated fish may be consuming the most toxic types of PCBs.

State health officials recommend that on the James River south of the Interstate 95 bridge, carp, American eel, flathead catfish and quillback carp-suckers be eaten no more than twice a month. Blue catfish and flathead catfish longer than 32 inches should not be eaten at all if taken from the James south of the Interstate 95 bridge to Hampton Roads. Most of the rest of the available game fish in that area, including smallmouth bass, bluegill sunfish, bluefish and croaker, shouldn’t be eaten more than twice a month.

Because PCBs have been banned, they’re not still flowing into streams, Flammia says. The problem was that PCBs saw widespread use for years in electricity transformers and at industrial plants scattered up and down the James watershed.

In the 1980s, the federal government launched its Superfund program to identify especially troublesome hazardous waste sites and clean them up. Three on the list posted on the EPA’s website include the Defense Logistics Agency, a major military supply depot just west of I-95 south of Richmond, C&R Battery Co., not far away in Chesterfield County, and Rentokil in Henrico County that used now-banned chemicals such as creosote to preserve wood from 1957 to 1990. Hayden says that these aren’t necessarily major sources for PCB contamination.

An industrial stretch from downtown Richmond on the west bank of the James has been an especially troublesome because it supported chemical and other industries for years before the dangers of its manufacturing waste were completely understood. One site, for instance, made propellants for a surface-to-air missiles used by the Air Force in the early days of the Cold War.

Even worse is the stretch of waterfront around Hopewell, which long has boasted chemical plants making things as varied as herbicides and synthetic fibers. Its darkest legacy is the Allied plant, now operated by Honeywell, which farmed out making Kepone, a carcinogen, to a converted gasoline service station nearby. There, waste products were dumped into Hopewell’s sewer system without any initial treatment until the practice was exposed on CBS’s “60 Minutes” in 1974. Kepone was banned in 1975.

No matter how much marketers try to showcase the James River in city branding, Richmond area residents still deal with the aftermath of its abuse.

Caroline Rayner contributed to this story.