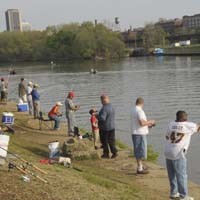 Last year, after a long process of hearings and resident input, the downtown master plan was completed and submitted to City Council for approval. Backers of the plan maintain that it was a visionary blueprint and an exercise in participatory democracy that's unmatched in Richmond's history. The master plan, however, is seriously flawed, and works against the best interests of downtown and the city.

The centerpiece of the plan is a vast expansion of the James River Park System to include virtually all undeveloped land between Rocketts Landing and the Pony Pasture. The stated purpose is to “develop a comprehensive system of natural open space along the river and create green connections between city parks and the riverfront.” It's the kind of language no reasonable person could oppose. “Residents … depend upon public parks and trails for their connection to nature” and “a great park system can … serve to reduce the carbon footprint of a city and improve the lives of residents.” Proponents of the plan wrote a script in which they were the heroes and opponents became the villains.

In the process, though, the master plan attempts to exclude and prohibit commercial development along the river — developments such as the Echo Harbour condominium development near Rocketts Landing.

The master plan aims to preserve and improve access to the river. The current park system offers plenty of access if you're young and fit, but if you're older, handicapped or less fit, the river is a remote place. For many people, access points to the park are neither easy to find or use. Park entry requires navigation of one-way streets, downtown traffic, a maze of winding roads, crumbing staircases and a hanging bridge that thrills some and terrifies others. The James River Park System is heavily tilted toward adventure sports and the master plan reemphasizes that.

Richmond has a very limited amount of available land along the river. Properly done, riverfront development would increase access to the river, raise its profile and provide additional tax revenue to the city that could be used to fund the existing park system. A right of way should be maintained from downtown to the city limits, and the Virginia Capital Trail could weave bikers and walkers through and enhance any residential or commercial project.

It's easy to paint idyllic pictures where city and river sit side by side, neither encroaching on the other, but real life doesn't work that way. Richmond is here because its founders decided to encroach on nature and establish a city at the falls of the James. Mills were built, canals were dug and streets were laid. Richmond and the river have a long history of encroaching on each other. The flood wall is a monument to that interaction.

There's one topic upon which almost everyone agrees. Richmond should treasure its riverfront and provide the opportunity for the greatest number to enjoy and benefit from the river. The disagreement lies in just how to provide that.

The downtown master plan should be recognized for what it is, a plan. It has no funding, no impact studies and no price tag. It isn't law. Preservationists will scrutinize a proposed development down to its last decimal place, but wholeheartedly embrace the master plan without hammering on details like the cost, the loss of tax dollars and hundreds of acres of prime development land. Is there funding to maintain an expanded park system? How would that impact the existing park? Will this increase access and use of the park?

The existing park system is a tribute to a generation of activists and the heroic efforts of its director, Ralph White. He commands a skeleton staff augmented by summer interns and an army of volunteers. Despite their best efforts, they struggle to protect the park from its own success. Trash accumulates daily, miles of trails need to be maintained and security and order are kept in the parking lots. It's not uncommon for vehicles to be towed or broken into. Nothing spoils a Sunday afternoon like shattered glass or a missing car. In short, the wish list for the James River Park System is as long and as wide as the James itself.

Cities around the world have struck a balance between preservation and economic development. Where we draw the line is critical. Drawing it too far one way or the other threatens both.

We need to raise the profile of the river and make wise use of its potential. Richmond has been on the upturn for a decade now, but it's been swimming against the current. The grand plans of activists and some civic groups will not produce the results they seek.

Richmond's future lies in both economic development and environmental protection. Meetings and committees don't build anything, investors and businessmen do. As long as we view the profit motive as a character fault, money and population will continue to flow to the suburbs and nearby cities. Riverfront development, done right, will result in a better park system, a more accessible river and a stronger city.  S

Paul Hammond is a writer based in downtown Richmond and publisher of LostArtoftheCity.com and AllThingsRichmond.blogspot.com.