The Right to Bare Arms

Ladies' arm wrestling takes over Charlottesville. Is Richmond next? 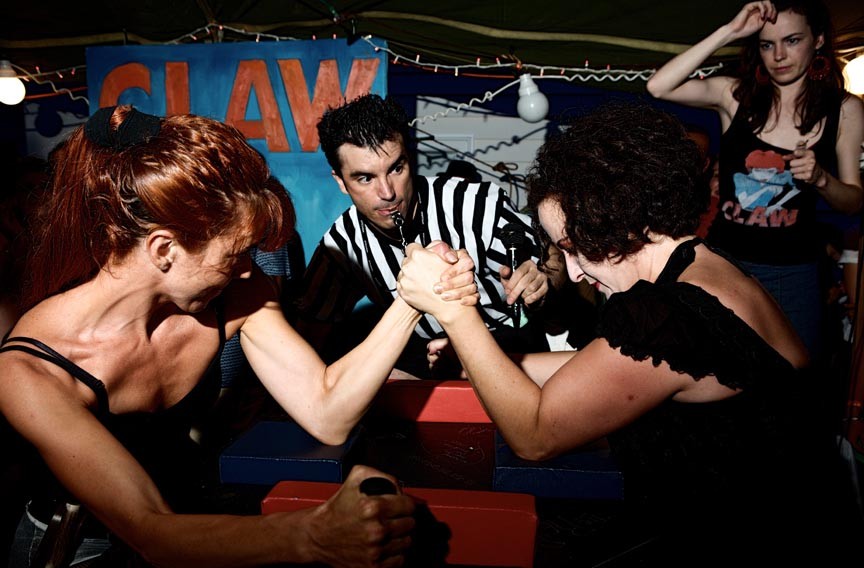 You wanna talk women's rights? Maybe you should ask the Homewrecker. Or Armageddon. Or Sistah Mary Slammer.

But look out — because these women will kick your arm-wrestling ass first, and maybe let you ask questions later. They are three representatives of the Collective of Lady Arm Wrestlers, known as CLAWUSA, a national alliance of women arm wrestlers whose leagues number 19 across the country. And they're gearing up for Super Claw, the first ever ladies' arm wrestling championship, happening in Charlottesville this Saturday.

It's worth the drive. The alliance's mission is "to empower women and strengthen local communities through theater, arm wrestling and philanthropy." Women dream up personas, such as Kara Dawson's the Homewrecker, a "one-woman wrecking ball" representing Charlottesville in Super Claw. Jess Tonahill, aka Pain Fonda, is "no longer suitable for the glamorous world of workout videocassette production" after a bad steroid injection, representing Austin's Clawstin. They assemble entourages, show up to "brawls" and throw down for charity. Proceeds from admission benefit community organizations.

"It's a three-legged stool of charity, sport and theater," says Jennifer Hoyt Tidwell, executive director of CLAWUSA and the co-founder of the original Charlottesville Lady Arm Wrestlers, from which the movement sprang. The first event took place in early 2008, and, as happens in the age of Facebook and Twitter, word quickly gets around.

Ladies' arm wrestling leagues — such as Hudson Valley BRAWL, Broads Regional Arm Wrestling League, New Orleans's NOLAW and Durham's LUEWWD, the League of Upper Extremity Wrestling Women in Durham, collectively have raised more than $200,000 for charities in their respective locales. The charities often are woman-centered or women-run — Family Planning Advocates for New York State, the Durham Crisis Response Center, Hagar's House, a sanctuary for women and children in New Orleans. The proceeds from Super Claw will be divided among the participating leagues to take to their respective charities. And the winning wrestler gets the Cape de Claw and our eternal fear and respect.

Richmond women take note: Many of you laid it on the line this spring for your rights — in the streets, at the State Capitol, even in jail. Are you ready to make a greater spectacle and form a Richmond league? Perhaps it's time to take up arms against oppression — your wrestling arms, that is. S

Super Claw takes place at the Jefferson Theater at 110 E. Main St. in Charlottesville on June 16 at 7:30 p.m. Tickets are $25. For information go to jeffersontheater.com/superclaw.