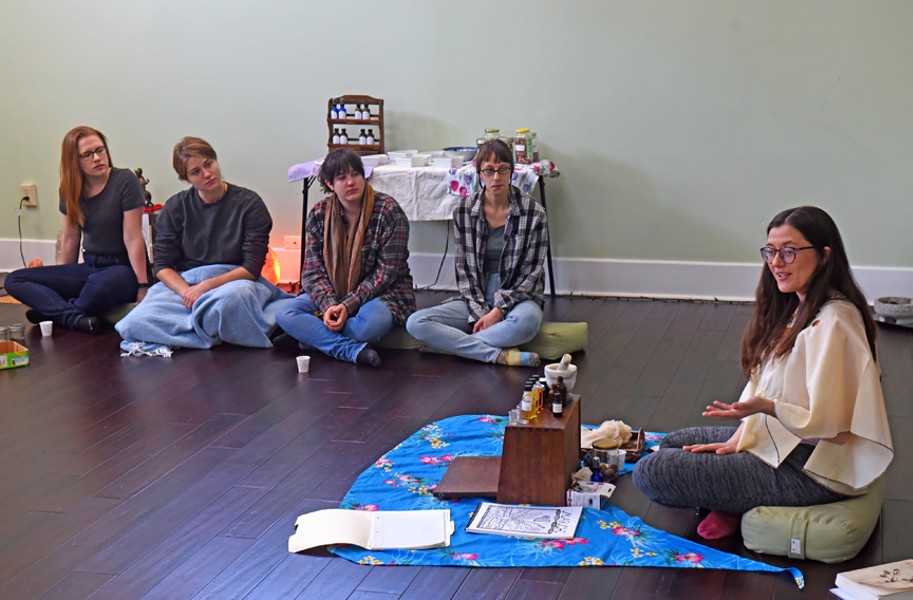 Two years ago in the spring, nearly 20 people sat around a fire in a cozy Richmond backyard. They comprised a new study group eager to discuss their first topic, a weed nearly as common in local lawns as the dandelion: broadleaf plantain.

This was the first meeting of the Richmond Herbalism Guild, a community group dedicated to connecting people with plants. Today, beyond monthly discussions, it organizes markets, seed shares and identification walks led by visiting and local herbalists. Members also hold frequent workshops on topics such as blending teas, making herbal wines and harvesting wild herbs responsibly, classes which often are free or donation-based. At meet-ups, they share recipes and connections to local herb growers.

Co-founders Laura Baum and Allie Hawley were surprised by the enthusiastic attendance of that initial backyard meeting. Having grown up around gardens and worked as a landscaper, Hawley began studying horticulture and sustainable agriculture at J. Sargeant Reynolds Community College. After learning the scientific name of purple coneflowers, Echinacea purpurea, she made the connection to echinacea tea, historically used to help ease cold symptoms like coughing, sore throat and headaches.

Hawley says that when struggling with anxiety and depression, she's found relief through plants. "Strengthening relationships with plants has created this constant sense of comfort where I feel supported even if I'm hurting and start to feel alone," she says. "I've been sad and tired and then realized, 'Oh, I haven't been making my infusion.' I start to feel better after just making one. It's amazing what a cup of tea can do."

Baum's journey toward herbalism began after moving to the Fan in 2012. A walk to Joe's Inn led her past a passionflower vine that stopped her in her tracks. She immediately wanted to learn more and soon started a small herb garden. Once experimenting with her own teas and tinctures, Baum realized the power of what she calls everyday herbalism. She exalts the act of simply brewing tea. "Anyone can form relationships with plants," she says, including the oft-overlooked herbs growing right underfoot.

Hawley and Baum met online through a local gardening forum. They began taking nature identification walks together and became fast friends, soon realizing they were both interested in herbalism but couldn't find a local group dedicated to it. So they launched the Richmond guild. Last year, through connections made on its Facebook page, the two friends were invited to teach a workshop at a conference in North Carolina. Baum shared herbal first aid applications while Hawley shared seed resources and cultivation tips.

As systems of modern medicine developed, more and more people began to view herbalism as an archaic practice at odds with science. But such practitioners as Hawley and Baum acknowledge the obvious value of Western medicine and see herbs as but one tool in a holistic approach to health, often focusing on preventative care, nutrition and the integration of physical, mental, emotional, social and spiritual well-being.

Many advocates see the quiet complexity of nourishing plants as an antidote to an increasingly tech-centric world. And their medicinal use as an avenue for community-based care for those without access to conventional health care. No one plant or pill is a "magic bullet," Baum maintains.

The group is far from the first herbalism presence in the area. There are already many established and budding herbal businesses, practitioners and advocates, such as the Veterans Resiliency Holistic Clinic and Three Sisters Midwifery Care. Recognizing this, another focus of the guild is to promote and support local herbalists through free-to-vend markets, the first of which was held in December at Väsen Brewing Co.

"One of my favorite parts about the guild is finding a way to exchange goods without money," Hawley says, "since we don't all have that resource."

From its humble backyard inception to celebrating its recent second anniversary with budding collaborations, Richmond Herbalism Guild also is increasing awareness of socio-economic and environmental-justice issues, such as indigenous rights and the protection of native medicinal flora. Its most recent foray is a local chapter of Herbalists Without Borders, an international network of herbalists, physicians, growers and others dedicated to projects such as community gardens, free and mobile clinics, disaster relief and trauma support.

"Plants change you," Baum says. "They support you and have the power to shift your perspective." S