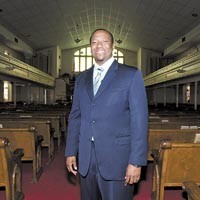 One of Richmond's most historic churches, Sixth Mount Zion Baptist is full of looming shadows and the ghosts of great men. But in four short years, the Rev. Tyrone Nelson has shown he's not intimidated by the past — he's far more focused on the future.

Born in the rural Varina area of Henrico County, but a nearly lifelong Richmonder, Nelson has a mission to remind the city that the community-minded principles on which his church was built are just as relevant today.

“That's the main component of what we do, is caring and compassion and justice and mercy,” Nelson says. His leadership role with Richmonders Involved to Strengthen our Communities, an interdenominational, faith-based social-justice organization, has seen the group taking strong stands on things such as substance-abuse care for Richmond Jail inmates, Richmond Public Schools suspension rates, and care for indigent patients at VCU Health System.

“We're just trying to show people a better way,” Nelson says. “The beauty of RISC is that people equate power. You can't be afraid and keep your mouth closed if something's not right. Sometimes people need you to put pressure on you to do the right thing.”

While Sixth Mount Zion's founder, the Rev. John J. Jasper, made his name and fame from “De Sun Do Move,” a famous sermon that reclaimed the earth as the center of the solar system, Nelson's basic principle is that community and government are nothing if they don't revolve around the people.

“I grew up idolizing people like Martin Luther King and Malcolm X,” Nelson says. “We're trying to revisit that. It's just selfless thinking. If my brother is good, I'm good.”