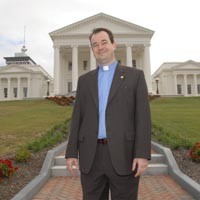 Since the Rev. Doug Smith became executive director of the Virginia Interfaith Center in 2004, the budget has tripled, the staff has quadrupled, and the center now offers a fellowship program for master's degree students. Smith says the mission of the center is to inspire Virginians to work for the betterment of their community, through education, research and "the support of public policies that create hope."

Smith also was one of the founders of the center's Commonwealth Institute for Fiscal Analysis, a public policy think tank for the nonprofit community. His efforts have enabled the center to put capital behind its convictions. "We've always had good moral arguments for what we've done," he says, "but we've not had the numbers we've needed."

The work of the center might best be remembered on the back of the buses in 2006. The center worked with The Martin Agency on an "education" campaign that placed Arabic billboards on local buses. Translated, the ads communicated such provocative messages as "I'm a Little Teapot" and "Paper or Plastic." The signs attracted national attention and landed Smith on Fox News' Hannity & Colmes. The idea was to provoke discussion, Smith says, "to move the conversation about cultural bias out of the academic setting."

Smith, a sought-after public speaker, doesn't limit his efforts for social change to his work at the center. He helped launch Richmondsunlight.com, a Web site that supports open government, he serves on the board of the Virginia Fair Trial Project and is working with other noprofit leaders to develop a news service that will deliver "human interest stories" to local radio stations.

Smith puts his family before his other obligations and attempts to have a normal social life. "I try to find time when I can to be with friends," he said. "My passion is working for others."