The Return of Dr. Bob

After a career-ending scandal at VCU, Richmond's sharpest political pundit, Bob Holsworth, is making a comeback. 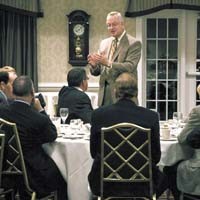 While a small gathering of dentists sips coffee and nibbles cheesecake, a man with silver hair sits slightly hunched, politely attentive. A banquet room at the Richmond Country Club on a damp, drizzly night in Goochland County might seem an odd setting for a political lecture, but it suits Bob Holsworth, the former political science professor at Virginia Commonwealth University, just fine.

A year removed from the classroom, Holsworth is making a comeback of sorts. He appears more frequently on the banquet circuit, speaking to dentists, state superintendents, business and civic associations across the state. Earlier this year he launched a Web site called Virginia Tomorrow on which he writes succinctly, and often poetically, about state politics.

Last summer, Holsworth was enduring a career-ending scandal at VCU. The university asked for his resignation as dean of the College of Humanities and Sciences following an internal investigation into former Richmond Police Chief Rodney Monroe's inappropriately awarded bachelor's degree, stunting a precipitous rise through the administrative ranks at one of the state's largest public universities. Widely considered an effective administrator and manager — he became dean in 2006 — some even considered Holsworth heir apparent to recently retired university President Eugene Trani.

Holsworth bristles when the topic of VCU and the scandal comes up — he maintains he had no knowledge of Monroe's degree requirements — and declines to discuss it, preferring to focus on his political punditry.
Ironically, leaving VCU has allowed Holsworth to focus more on political scholarship and his professorial analytical skills, on which he built a reputation in Richmond in the late 1980s and 1990s as the go-to pundit. He wrote for Style Weekly, the Richmond Times-Dispatch and appeared on local television stations WRIC-8 and WTVR-6 during campaign season to grade the candidates and offer electoral prognosis as Dr. Bob.

At the Richmond Dental Society dinner, Holsworth effortlessly morphs into the old professor, his sharp analytical skills on full display. After nearly an hour of dental-related housekeeping — discussing such topics as membership dues and educational seminars (the March 10 program: “Exquisite Complete and Implant Retained Over-Dentures Calibrated for the General Practitioner”) — Holsworth launches into a primer on the Deeds-McDonnell gubernatorial campaign.

“Virginia has become an indirect referendum on the state of the nation,” he tells the dentists. After an unprecedented presidential election in which Barack Obama carried the commonwealth, and a national anti-Bush sentiment ushered in an era of Democratic control in Washington, Holsworth says state Democrats envisioned breezing to a third term in the Executive Mansion. Then something happened.

“Tim Kaine became associated with the national climate in Washington,” Holsworth says, which put Deeds in a quandary. Running on the legacy of the last two Democratic governors, Mark Warner and Kaine, was suddenly an imposition. His challenger, Republican Bob McDonnell, has made sure to point out that Deeds is indeed the logical heir; that he, too, is a big-spending liberal with a massive tax increase plan.

Holsworth has a gift for pinpoint summation, the ability to dissect complex weather patterns and find the eye of the storm, where it's likely to hit and why. His analysis is also almost always dead-on, political insiders say. “I always find his observation if not startling or unique, he is almost always on target,” says Scott Leake, a longtime Republican strategist. “My read of the stuff he puts out — he is very dispassionate. He's exercising good political science.”

The president is still popular among Democrats, who have a plurality of voters in the state, which helps explain why McDonnell is careful not to bash the president. Knowing that only 50 percent of registered voters will cast a ballot in the gubernatorial election, Holsworth says it's about who can energize their voters most effectively. So far, that's been McDonnell.

Shortly after the debacle at VCU last summer, Holsworth was planning his comeback. After the state went blue in the presidential election, the first time in 44 years, Holsworth knew the 2009 gubernatorial race would draw the national spotlight. He left VCU entirely — he'd initially planned to continue teaching — to launch Virginia Tomorrow. With it, he says, “I could have a running statement going on, a running exhibition, during this election.”

He updates the Web site at night, penning short, often whimsical political analysis, complete with guest essays and aggregated political reporting from state newspapers and blogs. On Oct. 10, for example, Holsworth posted a 151-word poem, “If the Election Were Held Today.” Not only would the GOP win all three statewide offices and the House of Delegates, he wrote, but also could easily swing the state Senate by converting an independent-leaning Democrat:

… The GOP would have it all.
A decade of Democratic gains
Erased in a day!
Or however long it takes to find a Senate defector
That's what could be at stake
If the election were held today.

While the Web site hasn't become a must-read among political types yet — the site averages between 500 and 700 visitors a day, sometimes tipping as high as 1,200, Holsworth says — it's become a marketing vehicle for his political talks, and his consulting business (he's partnering with the former state school superintendent, Bill Bosher, former Chesterfield County Administrator Lane Ramsey and has an office at Moseley Architects in Scott's Addition). He hasn't begun to consider how to make money on the site, or whether to allow advertising, he says: “That's the next big decision.”

But one thing's for sure: Dr. Bob is back. Nelson Wikstrom, a political science professor at VCU, a colleague of Holsworth's for 30 years at the university, says he's not surprised that Holsworth has re-established himself so quickly.

“He's not always been a winner, but Bob, when he has suffered any setback, any minor setback, he has always been able to regroup and move ahead,” Wikstrom says, adding that the Web site and speaking engagements have largely restored his reputation. “I think he's back to being a credible observer and analyst of Virginia politics.”