The Stick Man brings unpredictability and sustainability to Lewis Ginter. 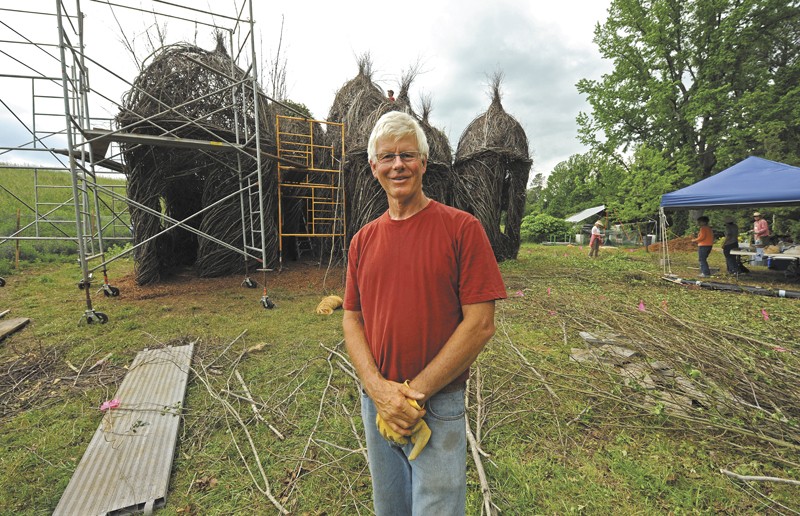 On a cold morning in early May, rain falls at the end of an overgrown road on a Hanover County farm. Volunteers from Lewis Ginter Botanical Garden bundle sweet gum saplings and sticks for renowned sculptor Patrick Dougherty, also known as the Stick Man. During the next three weeks, Dougherty and the volunteers will use the materials for a sculpture in the Anderson Wildflower Meadow at Lewis Ginter.

Volunteer Lisa Watts takes a break under a shelter with Deep Run High School student Chris Corsello. He’s autistic, and Watts has been his aide for 10 years. At first she was skeptical about the project, she says: “When I first heard about it I thought it was kind of weird. But there’s a vitality to it. It brings everybody together.”

Initial skepticism followed by devotion trails Dougherty around the world. Since the mid-1980s he’s worked at various museums, parks and botanical gardens, his stick sculptures spinning up from the ground both chaotic and precise, like dwellings from a dream.

Dougherty never knows exactly what awaits him at each site. “I like the renegade aspect of this,” he says. “I like the idea that you can fail, because most of the process is beyond your control. You’re forming it as you problem solve it. You don’t know all the answers ahead of time. Every organization I work for is incredibly different. They all have different strengths and weaknesses and so that makes it really fun.”

A few days later, Corsello and Watts are at Lewis Ginter, stripping leaves from branches. “He has no idea how this will come together,” Corsello says of Watts. “It’s going to be exciting for him to see the final project.”

It turns out Dougherty has no idea how it will come together either. “I’m working currently on several possibilities as far as a drawing we can use as our basic inspiration,” he says. “Once you have the thing under way, you throw the drawing away because it’s more reactive, ad lib. You see something happening and try to capitalize on that.”

On top of the scaffolding during the first week, Dougherty flexes upright saplings into the windswept curve of one of the domes that forms the roof of the structure. “I wonder if you can get me another bundle,” he calls to a volunteer. “I’d like some tall ones, but they don’t have to be.”

A crew of more than 60 volunteers works with Dougherty in shifts during the three weeks. “That’s the beauty of this,” says Randee Humphrey, director of education at the garden. “The volunteers really get involved in the building of it. They’re not just handing Patrick sticks.”

“Somehow,” Dougherty says, “I’ve managed to figure out how to point people in the right direction. Maybe it goes along with my own way of dealing with sticks and things. There’s latitude, but it’s got to be with a range.”

During the second week, the sculpture takes the form of a series of domed diamonds, a first for Dougherty — and, he says, possibly his largest work.

“We think that the reason he’s taken on such an ambitious project is because the volunteers are such a good group to work with,” Humphrey says. “He’s really kind of set the bar high. I think he realized how skilled they are and how much support he would have.”

The final week, volunteers salvage sticks from the discard pile, and additional truckloads of material are brought in. Dougherty estimates they’ve used 6 tons of sticks and saplings. At last, on Saturday, May 21, Dougherty takes a stick and calls it the last one.

In a few weeks, he’ll leave for France to begin his next sculpture. What remains, besides “Diamonds in the Rough” (named at the garden’s Spring Fling), may last longer than the two years or so the sculpture will stand before becoming compost.

“I think this challenged the institution to be experimental,” Humphrey says, “to allow ourselves to lose control a bit and to allow things to happen in a way that we can’t predict. I think that’s what artists bring us to … that realization that we can’t control everything and that often the most unpredictable things are the most powerful.”