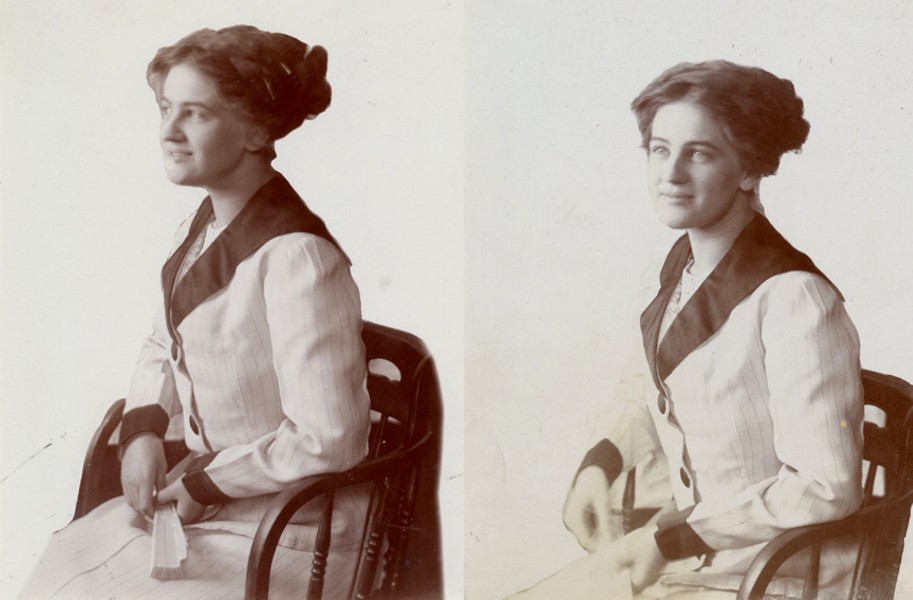 Cook Collection, The Valentine Beulah Binford tried to turn tragedy into gold by working with a vaudeville manager who hoped to start her stage career. But a career never materialized due to media and public outrage, even a short silent motion picture was pulled after one public showing.

Beulah Binford was presumably a product of Richmond's officially sanctioned red-light district located from 1905-1915 on the now-defunct Mayo Street, one block west of Main Street Station. Prostitution, gambling and illegal drinking were officially sanctioned on this strip by the mayor, chief of police and the Board of Public Commissioners.

Born in July 1895, Binford was described as a "handsome but morally corrupt girl" who in 1907 fell in love with Henry Clay Beattie Jr., the spoiled and irresponsible son of a prominent Richmond businessman.

The 23-year-old Henry started dating the 13-year-old Binford, who according to press reports already "had a reputation for being fast." Two years later she gave birth out of wedlock. They gave the child up to Mary Trout of Roanoke after Beattie — never publicly admitting paternity — promised to pay her expenses. He later reneged, saying that "Now that you have adopted it and it's yours. I've cut it out."

The little boy, Henry C. Binford Trout, died at age 11 months of infant cholera.
Beattie convinced Binford to move to Raleigh, North Carolina, so as not to interfere with his marriage on Aug. 24, 1910, to Dover, Delaware, native Louise Wellford Owen. They soon had a son of their own, Henry Clay Beattie III.

The marriage was not a happy one, however, and on March 25 Beattie coincidentally ran into Binford at a baseball game in Norfolk. Falling for her all over again, he convinced her to move back to Richmond. After a few months, Beattie's father learned of the affair and threatened to withdraw support of his son, forcing the young philanderer to hatch a deadly plan, which he carried out on July 18, 1911.

At the coroner's inquest July 22, an unflappable Beattie refused against the advice of counsel to answer questions regarding his affair with Binford.

Binford related in sordid detail her relations with Beattie before and since his marriage, including their trip to a "questionable resort" the day before the murder. A letter from Beattie to her, enclosing $10 for payment for furniture, was entered into evidence. On July 28, Beattie was formally charged with murder, and Binford was held for the trial.

The Beattie case was Richmond's sensational trial of the century. After endless salacious testimony, Beattie was found guilty of first-degree murder and sentenced to death in the State Penitentiary's electric chair.

After her release from jail, Binford found herself publicly maligned and blamed for Beattie's downfall. She elected to capitalize on her new-found infamy by signing on with a theatrical agent named Freeman Bernstein, who booked her "probably for a couple of songs" on Sept. 7 at Philadelphia's Liberty Theater.

That very day, however, the National Board of Censorship ruled that Binford could not appear in any stage or screen play depicting herself, due to her scandalous reputation. Now a pariah, Bernstein dropped Binford as a client, and even New York hotels would not rent rooms to her.

On Sept. 18, the Special Feature Film Co. released a short silent motion picture filmed before the censorship ruling called "Beulah Binford's Own Story," starring Binford as herself. The moralistic picture portrayed her downfall, with a North Carolina newspaper stating, "The last scene shows the bars of a prison cell dissolving while Beulah steps forth, her face wearing a supposed expression of repentance." The final card read "I wish I could carry my story into every home in America."

Again, the Board of Censorship prohibited the film, and it was subsequently pulled from theaters after one showing. Today it is considered lost.

After appearing in October in a lackluster performance as a maid in a stage play titled "Grandma" at the Garden Theater, Binford changed her name to Elizabeth and worked for $10 per week as a telephone operator and "office girl" on Broadway.

After Beattie's Nov. 24, 1911 execution, she did not remain in New York. After being discovered in Peoria, Illinois, in late April 1912, she revealed she had been living inconspicuously in California as well.

"My God, can't you leave me alone?" she exhorted to the reporters.

After a couple of marriages and a relatively anonymous life, including a brief stint as a World War I nurse, Betty Knapp, aka Beulah Binford, died March 25, 1973.

She is buried at St John the Evangelist Cemetery in Baltimore, Maryland.