With the coming of a saint, Richmond's Mixteco community steps into the light.

His golden wings gleam. His ruby robe glitters. He looks more like a doll than a dragon slayer.

But the saint is tougher than he seems.

He defeats evil. He grants prayers. With the raised sword fastened to his hand by a rubber band, San Miguel will protect a small remnant of an ancient tribe: a people who have lived here, unseen, for 12 years.

The long-lashed, fiberglass saint is a perfect copy of the one standing in a small church 2,400 miles away. San Miguel is the patron saint of Metlatónoc, a remote mountain town in southwestern Mexico where Richmond's Mixteco people were born. They may never go home again, so they have brought their saint here, to Sacred Heart Catholic Church in Manchester.

In preparation for the saint's arrival on this Saturday morning in late July, musicians strike up a song. Women arrive bearing bouquets of roses. A father makes the sign of the cross on his young daughter's face with a white devotional candle, a veladora. He carries it to the front of the church, sets it in a metal stand and lights it. Other men join him, carrying candles, until the corner glows bright as a bonfire.

Around 10:30, nearly 200 people stand in the shade of a lop-limbed oak. The temperature's already climbing toward 90 degrees. The Mixtecos sweat in their jeans and their suits and their skirts. The smell of incense mingles with perfume.

And then, it is time. 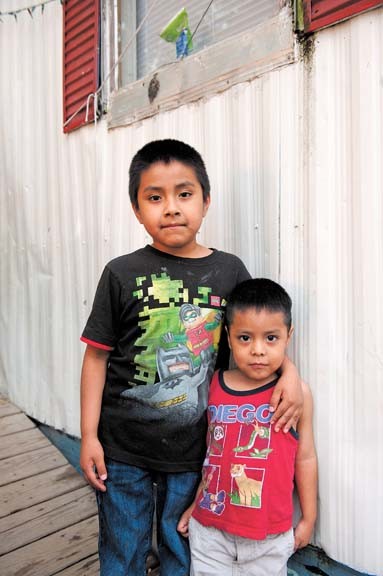 Auerbach asks God's blessing on the saint. "The scripture teaches us that angels always accompany us," he says first in Spanish, then in English. The statue will remind us, he says, that "the invisible angels guard us and protect us in our daily lives."

THE MIXTECO KNOW what it feels like to be invisible.

There are more than 1,000 of them living in Richmond, clustered in houses off Jefferson Davis Highway. You've probably never noticed them. And that's exactly the way they want it.

"They're a world unto themselves," Auerbach says.

The Mixteco are an ancient people. Their true name is the nuu maalsavi: the people of the rain. They bowed, but did not break, under Aztec and then Spanish rule, finding sanctuary in the mountainous regions of what is now south-central Mexico.

Approximately 500,000 Mixtecos live in Mexico and the United States, mostly in California. They speak more than 25 variants of their language, which is many thousands of years old. (Almost impossible to describe, the Mixtec language sounds nothing like Spanish. Subtle changes in tone, or the addition of an accented letter, can alter entirely the meaning of a word.) They make up the third largest native population in Mexico, where there are more than 10 million indigenous people.

The Mixtecos are one of several indigenous Hispanic groups in Richmond, says R. McKenna Brown, executive director of the Global Education Office at Virginia Commonwealth University. There are the Purepecha from the Michoacán region of Mexico, and multiple groups of Mayans. Just the other day, Brown found himself speaking Kaqchikel with a surprised Guatemalan Mayan in a CVS on Midlothian Turnpike. "We are more global and cosmopolitan here than some might imagine," he says. 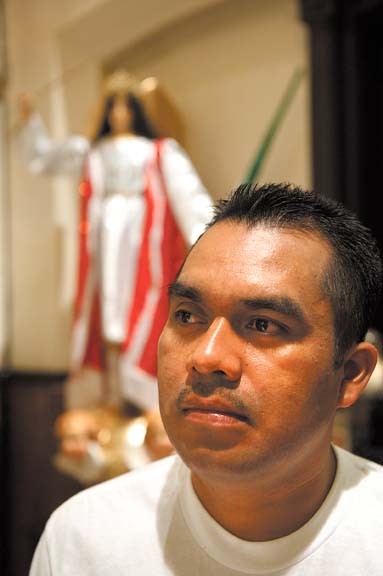 Mixteco immigrants have spread across California, Utah, the South and the Pacific Northwest, dispersed as widely as blown dandelions. But their family and town connections remain unbroken, says Arcenio J. Lopez, who is Mixteco and the associate director of the Mixteco/Indigena Community Organizing Project in Ventura County, Calif.

When they leave home, they go "hand by hand," Lopez says. They tell their friends: "I know this place, let's go over there. I know how to move, I know how to live over there." And that's how 1,000 Mixtecos from one tiny town in Guerrero end up in Richmond.

Rufino Leon was one of the very first to arrive. He came here with a handful of others in 1999, seeking the landscaping work he heard was available in Richmond. After that, "he talked with other people and they all began coming," Auerbach says, translating for Leon.

Metlatonóc, the remote mountain home of Richmond's Mixtecos, is one of the poorest places in Mexico. With his hand, Leon traces in the air a winding road, showing how difficult it is to get there. Everyone is devoutly Catholic. Many people speak only Mixteco, not Spanish, and can't read or write. The houses are adobe and thatch, although in recent years, money sent home has allowed some to build with cinder blocks and concrete. Influenced by their American sisters, women have begun to wear pants.

Leon talks with his relatives by phone, but "no Facebook," he says. There are no computers in Metlatonóc. "Es tranquilo, porque toda la gente son conocidos," he says. It's peaceful, because everyone knows each other.

Mixtecos are perceived by Americans and other Latinos as being secretive, even standoffish. But it's not because the Mixtecos dislike outsiders.

"We're coming from very specific rural communities," Lopez explains. "The only thing we saw is our own people there, and our own life, closed there. So when we're coming to big cities, and we're coming to these new worlds for us, it makes us feel afraid. It's a different culture.

These fears extend to their children. Translating for Leon, Auerbach says "they tell their kids really to stay among themselves, so that there won't be problems. ... You might play a little bit with [other kids], but that's enough."

The Mixtecos keep to their own small corner of Richmond. But on this Saturday, they're stepping out.