"Law Abiding Citizen" contains a premise so high-concept it hurts. 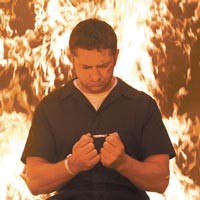 If you like wacky plots, you'll love “Law Abiding Citizen.” A man (Gerard Butler) whose family is killed in a home invasion goes insane with revenge after the prosecuting lawyer (Jamie Foxx) botches the case against the killers. The twist: Unlucky for the prosecutor and the rest of law enforcement, the guy turns out to be a tactical genius who used to work for American intelligence agencies. Yet he couldn't prevent a home invasion! So — of course — he blames the government.

The face of the government is our protagonist, Nick Rice (Foxx), an assistant district attorney who spends his days polishing his high conviction rate. We're repeatedly told how high, mostly because Nick exists in the kind of movie that needs a prosecutor with an insanely high conviction rate. Of course, it's supposed to be because he's so driven and ambitious. And yet, for plot purposes, after a decade he's still the assistant D.A.! Oops. The bad news is that Nick turns out to be the more believable guy.

The other guy is Clyde Shelton (Butler), who takes matters into his own hands after Nick and the justice system let him down. No ordinary vigilante, Clyde eventually brings the killers and the city to their knees — from behind bars no less. Nick and his boss meet with a shadowy spook (Michael Kelly) under a bridge, Deep-Throat style, to find out how serious this is. Evidently, very. Once, they had this, like, extreme Muslim terrorist guy they couldn't reach, Predator drones be damned. Clyde figured out a way: Rig his necktie to choke him. While wondering whether the United States government actually assassinates people, you may forget to remember this: Extreme Muslim terrorists don't wear neckties!

That doesn't deter Clyde, who slaughters innocents and stages miraculous acts of violence, all so he can teach Nick a lesson. Yet the real lesson escapes Nick altogether. The only way to stop a guy like Clyde is to send two crack heads to his front door. Evidently, that's this Superman's kryptonite. (R) 122 min. HHIII