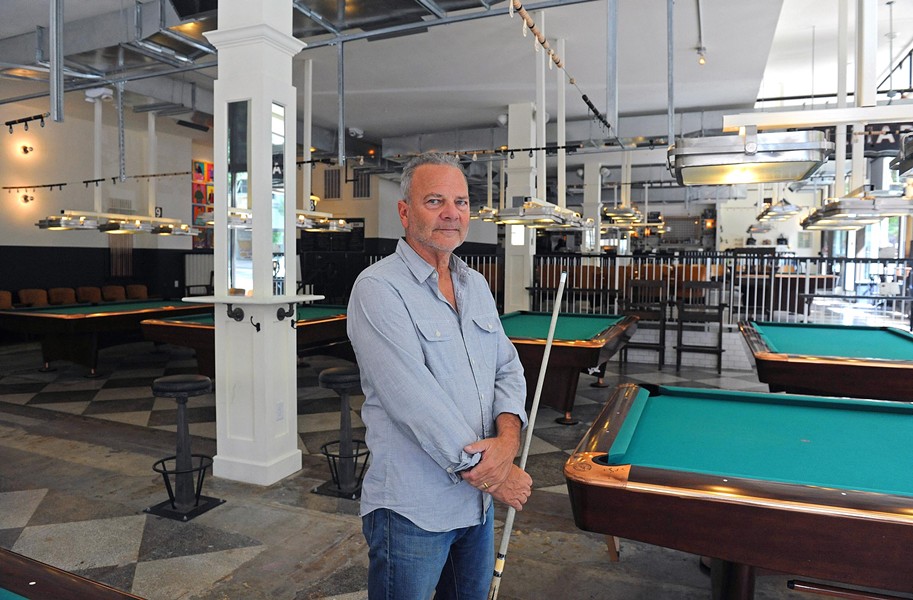 Cleavage, potted plants and mirrors are the signifiers of suburban pool halls, says Jim Gottier, owner of Greenleaf’s Pool Room in downtown Richmond. Instead, he wants to shrug off tones of Humphrey Bogart and tell a more accurate story about American billiards.

To do that, he’s commissioned nearly 100 vivid portraits from an obscure painter named Aureliano Lorenzo. This colorful gallery sits in the shadow of the John Marshall Hotel, and the players register on a scale of bad, badder and baddest.

The people portrayed are good only in the sense that they played to perfection. More than a few are ugly. Some sport angel wings and halos, despite a life of excess. Others have devils dancing on their shoulders, suggesting a more tortured existence. All are rendered in a whimsical style that’s like the bastard child of Dr. Seuss and “Schoolhouse Rock.” Most interestingly, you’ll see some living Richmond players on the wall. But what about the old River City greats?

“We don’t know much about their past,” Gottier says. This is his secret reason for creating the gallery: to uncover the city’s pool history.

Local legends must’ve existed, because Richmond was a vibrant pool destination even during the Great Depression. But information about those players is difficult to find and billiards history can be full of apocrypha. Every time a customer recognizes a portrait, Gottier hopes he’s one step closer to hearing the true story of Richmond’s angelic hustlers.

“We know that American pool runs parallel to the tale of 20th-century progress,” says the 60-year-old, flashing a boyish grin. “With trains, pool halls were downtown. With cars, pool culture migrated to the ’burbs. Billiards reflected the popularity of jazz, blues, and baseball — always relying on a basic structure to create a new experience every time.”

Skyscraper personalities are suggested by the names: Cowboy, the King, Bucktooth, Strawberry, Machine Gun, Weenie Beenie and Pole Poker. Gottier himself goes by Carpet Jimmy, hinting at his past job as an Oriental rug merchant.

“This game is all about stakes and high drama,” Gottier says. “Pool players have the luxury of being themselves. They aren’t like pro golfers, some antiseptic blond kids wearing bad khakis and shilling their personal brand.”

This might sound like typical smack talk from an old pool shark, but don’t be deceived. Gottier was one of those antiseptic kids. Then something — or rather, someone — happened to Gottier. His name was Cecil Tugwell.

“That asshole,” Gottier says. “He ruined my life and sent me into a dark place for the next 30 years.”

It wasn’t financial ruin or grievous bodily harm, two things with which Gottier later had close calls. Tugwell was a rising star from Compton and Gottier a savvy player at the University of California, Santa Barbara. A pool game would determine who had more street cred in the Los Angeles area. Gottier decided to take the high road, and said aloud that it didn’t matter whether he won or lost. Tugwell leaned over, grabbed his arm tightly and rasped, “Then you don’t know nothin’ ’bout the game.”

Gottier was devastated. He had been exposed as a poseur college boy while Tugwell was trapped in the hustler life, sleeping six guys to a flophouse bedroom. Thus, Gottier began the decades-long journey of learning about America’s unsung pool legends.

James Wright, a 62-year-old Church Hill resident who manages facilities for the Robinson Theater, says that Tugwell types used to populate Richmond during his youth. He recalls when the theater used to be Joe’s pool hall, with Eddie’s pool hall just a skip away at P Street. It was a place where men would gamble their cares away, and Wright recalls a six-hour game where the loser forfeited two cars.

“We definitely had a couple of showdowns there,” Wright says.

Joe’s pool hall was owned by the father of Renard “Shorty” Davis, a nationally renowned player who lives in Richmond. Former mayor Douglas Wilder even mugged with Shorty at Greenleaf’s when his portrait went up. It was the kind of historical event that satisfied Gottier immensely. If he couldn’t find players of the past, he could start writing the next chapter of Richmond’s pool history.

“Shorty is definitely one of the premier players of our age,” says Thomas Dorsey, owner of Diamond Billiards in Midlothian. “He’s the kind of player that inspires people to join a league. Then they’re hooked on the game. Pool culture is kind of making a comeback in this city.”

While the renaissance picks up, Gottier chalks a 35-year-old stick. He’s going to play a round of straight pool, which he calls “the most beautiful and elegant” game.

“Straight pool is as American as it gets,” Gottier says. “It’s all about abandoning your plans and starting over, questioning the validity of your hopes and dreams.”

But Gottier won’t be abandoning his gallery any time soon. He’s determined to sink his best shot yet. S