The danger in “Fair Game” isn't as clear and present as hoped. 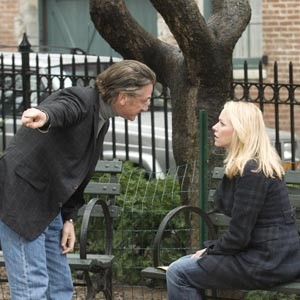 A few weeks ago, on his “Hardball” program, Chris Matthews was raving about “Fair Game,” then in limited release. One of the film's protagonists, Joseph Wilson, was Matthews' guest, yet Matthews was unusually enthusiastic about the movie, calling it “great” and “one fine movie.”

Sitting through the picture weeks later it was difficult to see why Matthews was so overtaken. Then, about halfway in, lo and behold there was Chris Matthews! To be fair, he appeared in voice only, inviting Wilson (Sean Penn) over a cell phone call (“Hey Joe, it's Chris Matthews!”) to be on his program, presumably a bit of historically based realism. About 30 minutes later, again there was Matthews, though to be fair again, this time he appeared in what seemed like archival footage from his “Hardball” program, when George W. Bush was president, talking about the Valerie Plame Wilson affair that absorbs “Fair Game.”

“Fair Game” isn't a bad film, but it's certainly not a great one. You can see why Matthews likes it so much, however, even if you discount his participation. It plays like a bit of contemporary journalism, a cross between an investigative report, an op-ed piece and a Hollywood thriller, delivered with the snap, crackle and pop of an MSNBC show. (When will movies feature a scroll so we don't miss any abducted-baby news?) Its good guys and bad guys are all drawn from that lofty stratum of society where people like Matthews perch. It's much like a dozen other similar films inspired by the interesting times of the Bush administration and the invasion of Iraq: earnest and competent but quite routine. If you already know the story you run the risk of a very dry and boring two hours.

For those who need a recap, in 2002 Valerie Plame Wilson (Naomi Watts) was a covert CIA agent working in counterterrorism when the agency approached her to recruit Joe, her husband, to help gather some intelligence on Niger, which was suspected of selling 500 tons of yellow cake uranium to Saddam Hussein. A retired ambassador, Joe had previous experience with the country and quickly shot down the narrative of the Bush administration, which went ahead with the yellow cake story anyway, not to mention a war we're still fighting. The administration also tried to bury Wilson under a mountain of negative publicity. His trip became a junket; his wife got her cover blown.
“Fair Game” was directed by Doug Liman, whose “Mr. and Mrs. Smith” and “The Bourne Identity” probably convinced the powers that be that he was the man for the job. “Fair Game” jumps all over the world, and is about spies, but I don't think they needed Liman, even though he's given the movie that contemporary, immediate, fly-on-the-wall feel.

We learn about the betrayals of Joseph Wilson and Valerie Plame the way they learned about them, often via the talking heads on television or reports in the paper, news that trickles into dinner conversations or distorts the information gleaned at classified briefings we just saw taking place in governmental basements. Information might be the most dangerous weapon of our time, and it detonates on the screen in “Fair Game” like shrapnel, with direct and collateral damage.

What the movie doesn't have is much tension or suspense, pretty much vital in, well, a suspense film. Sure, there are clear attempts, but we already know how this story turns out: with book deals. No amount of meta-referencing helps. In fact, the nods to 24-hour news, though they could have been a pointed critique of the times, come across as showy and self-congratulatory. References to people such as Tucker Carlson and Andrea Mitchell aren't played as social commentary but as a way to be hip, the way cell phones are written into the screenplays of teen horror movies. “I want you to comb every blog on the Internet!” screams an irate Scooter Libby (David Andrews). Whoa.

In decades past “Fair Game” would have been a very respectable made-for-TV movie, and while that shouldn't keep you from watching it at the movie theater, you shouldn't expect much more. There's almost nothing going on here that you haven't seen in a plethora of similar political diatribes rabble-rousing at the multiplex in recent years. Sometimes there's a lot less. (PG-13) 108 min.