The Place Is Pivotal 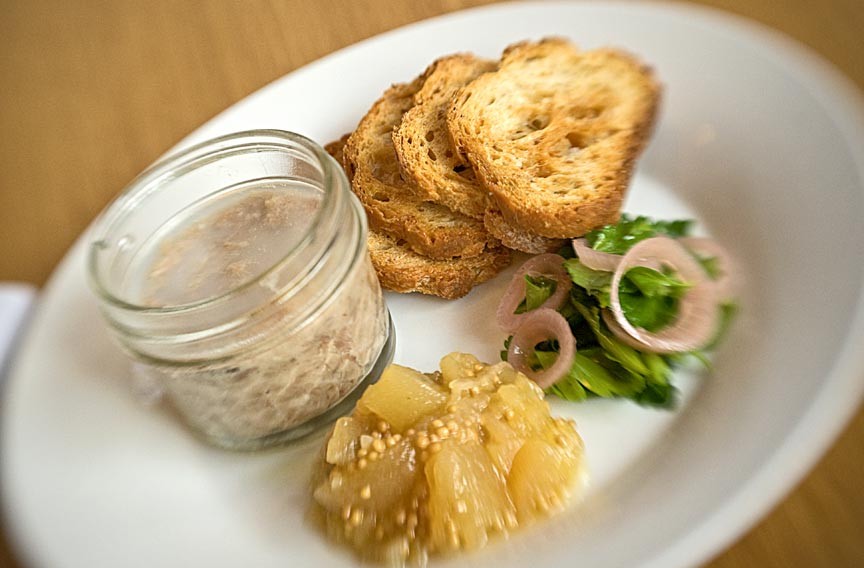 It’s Saturday night and you’re going out for a nice dinner. Where to go?

Since mid-November, scores of knowledgeable diners have been heading downtown. And not just to its fringe, but to the heart of the empty old retail district on Grace Street.

Ry Marchant, whose father ran the former Miller & Rhoads department store, has transformed the nearby, long-abandoned fashion store Montaldo’s into a 21st-century version of hip. The 100-seat restaurant, which doesn’t take reservations, is full by 7 p.m. on weekends with a diverse clientele, many of them dressed to the nines and crowded along the starkly trimmed bar.

The Southern small-plates menu — emphasis on small — is divided among snacks, cold and hot dishes, and desserts ($4-$13), making it an ideal field for grazing and sharing. Chef and partner Jason Alley came over from Comfort, which he still owns, refining many of his Southern delights.

There are no rules for where to start, but an orderly progression through the 20-dish menu might begin with pimento cheese and crackers; butter-bean hummus with sliced carrots, celery and pepper; four deviled-egg halves topped with salmon roe; and beet salad with green beans and hazelnuts.

Be sure to try the lamb sausage with navy beans and basil, the cold Virginia ham served with a sinus-clearing beer mustard, seared fish with redneck romesco (corn bread added to the classic Catalonian sauce), salt clams with bacon and cabbage, and fried Rappahannock River oysters with celery-root slaw.

Yukon gold potatoes, apples and pearl onions — with a topping of duck fat for an extra buck — are one of several vegetable options. Or there are Brussels sprouts with winter squash, preserved lemon and pecan; Carolina gold rice smothered in mushroom gravy, and, best of all, wide noodles with turnip greens and pot liquor — a broth of cooked greens, vegetables and meats.

Two other tasty choices are pork rillettes with quince mustard, parsley and toast, and braised beef biscuits with grits and turnips. Only one dish isn’t suitable for sharing, and it’s a cheeseburger that isn’t exceptional.

One inconsistency is the pork belly, which was all belly, no pork on one visit, and all pork, no belly on the third. Conversely, the cold, sweet-tea smoked trout with apple, bacon and benne seeds, which is succulent initially, comes out dry and bland the second time around. Another disappointment is the confit fried chicken, a couple strips of indeterminate origin accompanied by a dollop of potato salad.

Fried apple pie is dressed with salted caramel and crème fraîche, and the pecan pie has smoked maple-bourbon cream. My favorite is a crunchy candy bar that combines chocolate, Nutella and hazelnuts.

Jeff Farmer tends the 14-seat bar, which is striking in appearance for what you don’t see: no mirrored wall of bottles and, mercifully, no television. The back wall, covered with redwood barrel staves rescued from a Hopewell factory, holds taps for 15 East Coast microbrews and a hard cider, Original Sin. Eight specialty cocktails get their unique taste from house-made mixes — syrups of honey lavender and smoked ginger, cranberry jam and pickle brine.

The clean lines and soothing shades of the high-ceilinged, bright-lighted, noisy room are the design of managing partner Michelle Jones and Alley’s artist wife, Mercedes Shaum. Off-street parking is limited, but there are several spots behind the building and valet parking is available.

Pasture soon will have company. Tenants are moving into the restored John Marshall Hotel around the corner, and 525 at the Berry-Burk is under construction in the next block. Before long the question won’t be whether to go downtown, but where.