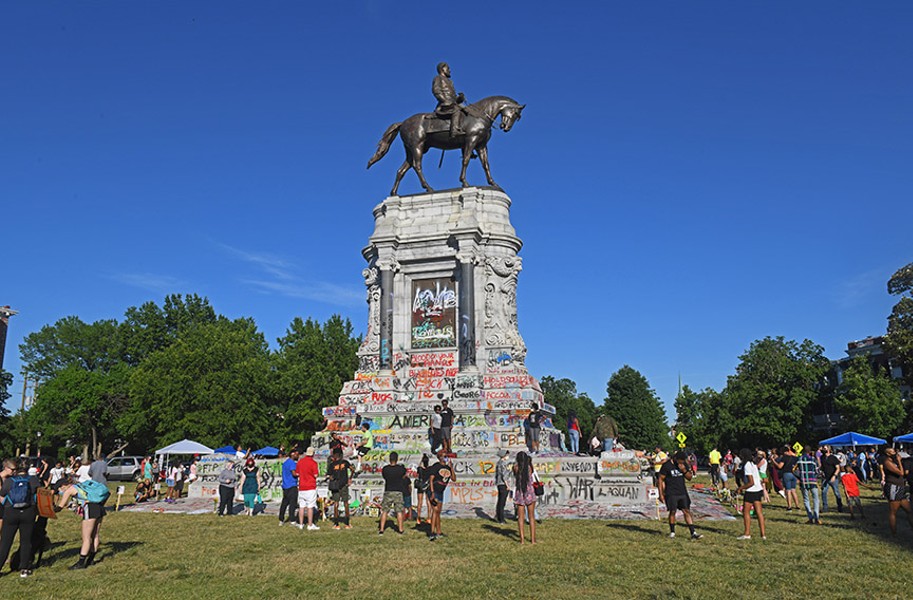 Scott Elmquist There was a festive atmosphere around the Robert E. Lee statue on Sunday, June 7, as people fired up barbecues and posed for photos.

Earlier this year, the Virginia General Assembly broke with decades of tradition when it voted to no longer hold Confederate monuments across the Commonwealth as permanent, sacred and immovable. It was a moment long in the making – one Richmond wasn’t going to wait for much longer.

The Black Lives Matter protests that responded to the police killing of George Floyd in Minneapolis – and re-illuminating Richmond officials’ lack of response to the 2018 police killing of Marcus-David Peters – saw demonstrators take the monument debate into their own hands.

The noose around Jefferson Davis’ neck and “BLM” emblazoned across the Robert E. Lee, Stonewall Jackson and J.E.B. Stuart monuments added context that Richmond has only just begun considering. 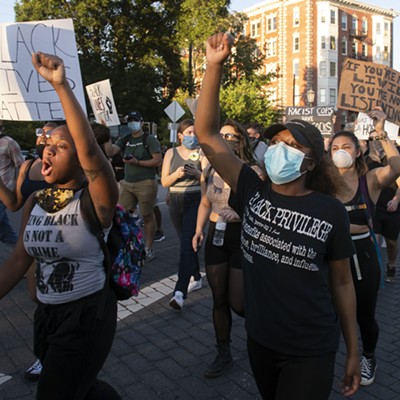 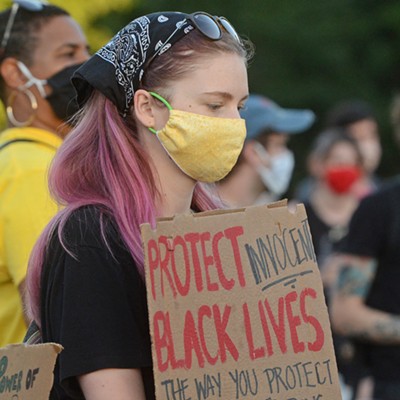 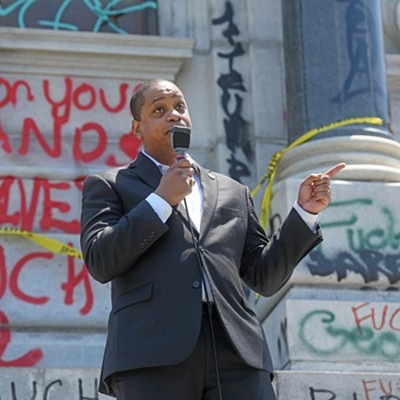 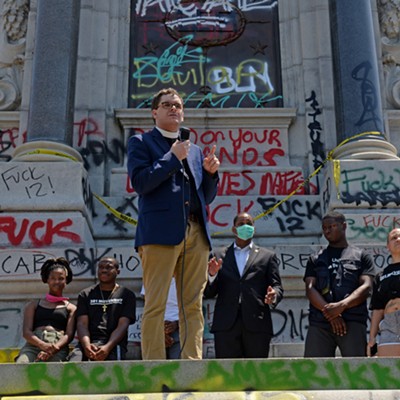 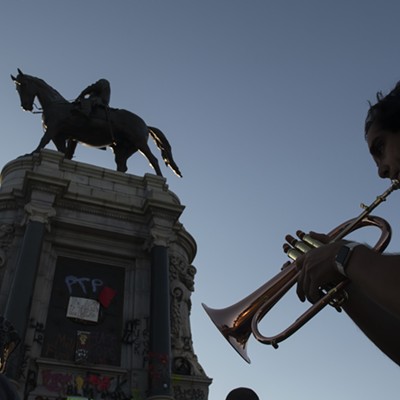 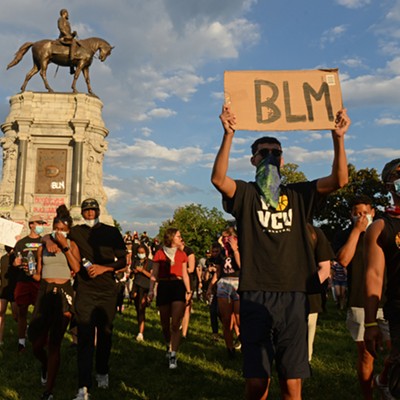 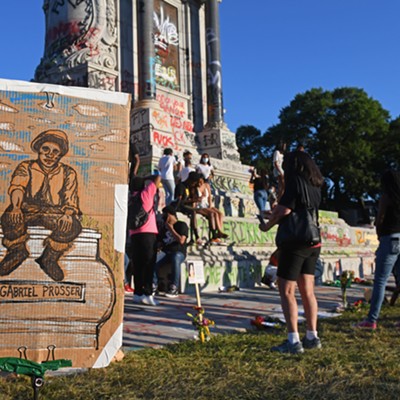 In 2019, the “General Demotion/General Devotion” exhibit at the Valentine offered a variety of creative pitches on how to confront the monuments’ racism. In 2017, before being overshadowed by white supremacist violence in Charlottesville, a commission asked the public to weigh in. Its final report, issued in 2018, called for the removal of Jefferson Davis and new context placed around the remaining Confederates.

There’s also been movement toward addition rather than subtraction. In January, City Council approved startup funds for a monument dedicated to the black Union soldiers who secured victory at the Battle of New Market Heights, among them 14 awarded Medals of Honor.

When Style posted a poll on Facebook in March asking if some or all of the monuments should come down, we knew that changing state law made it more than an exercise in fantasy for readers. We had a few rules: The person must have lived in Richmond outside of wartime or contributed to the cause of freedom. And honorees must be dead.

On June 2, Richmond learned that the governor would call for the state-owned Lee monument to come down. The mayor called on City Council to bring down the others.

The results of our reader poll below, from March, may or may not be surprising. They capture a snapshot of Richmond from when the monuments coming down was a possibility rather than a certainty. We will conduct another poll of who Richmond wants on Monument Avenue soon. Confederates will not be eligible. 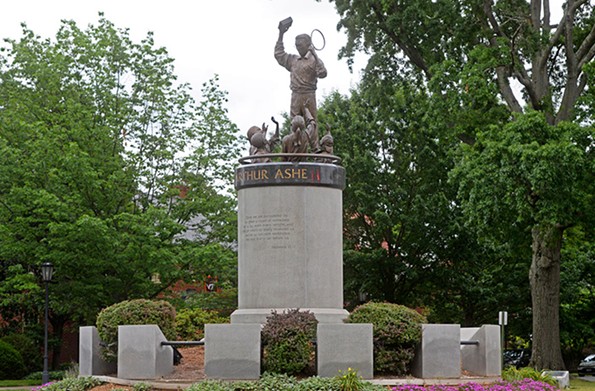 A quarter-century ago, both white supremacists and Ashe’s widow agreed on one thing: He did not belong on Monument Avenue.

What changed? Jeanne Moutoussamy-Ashe’s alternative proposal for an African American Sports Hall of Fame has been forgotten. The Confederate revivalists who protested the dedication ceremony are losing battle after battle.

The sculpture itself remains polarizing. Some readers want it switched out. Others want it moved to the street that now carries his name, away from the Confederates.

In 1996, Richmond Free Press publisher Ray Boone said Ashe didn’t belong with traitors. In 2020, one reader noted the new name for the Boulevard was another reason to put him elsewhere: “We put him on the periphery when he should be prominent. Considering that A.P. Hill and Columbus are on Arthur Ashe Boulevard but not the man himself, we should move him to his own street.” 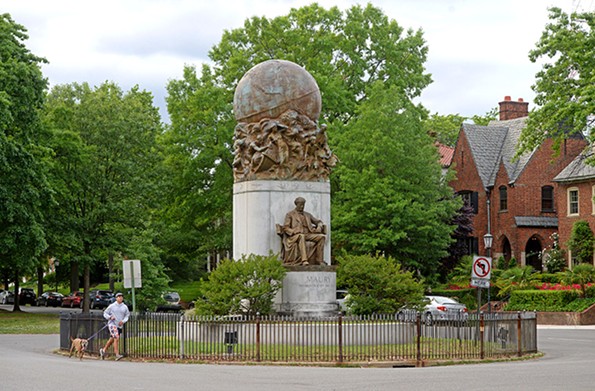 Readers tended to forgive Maury for his Confederate loyalties – including an 1868 plan to create a New Dominion in Mexico consisting of Virginia planters and “their freed slaves” while punishing those who carried swords and guns. He is remembered mostly for his contributions to oceanography, with his career eventually earning his name on geographic landmarks across the Commonwealth, U.S. naval ships and a bust in New York.

Among many Richmond narratives beginning to emerge from the Lost Cause haze is one woman’s determination to aid the Union against long and dangerous odds.

A member of Richmond society, she feigned rebel loyalty while harboring a hatred of slavery and secession. Armed with a cipher code and a custard dish with a hidden compartment, she volunteered as a nurse in Libby Prison, packed with Union prisoners, to feed intelligence about the Confederacy across enemy lines. During the war, she built a spy ring that included her freed servant, Mary Bowser, who had access to Jefferson Davis’ office and a photographic memory.

General-turned-President Ulysses S. Grant appointed her as the city’s postmaster after the war. Richmond society shunned her. After the appointment ended, she relied on rich Bostonians and other Union veterans until her death in 1900 – including funeral costs. Her home was torn down, with the site being used for Bellevue Elementary.

In 2020, Richmonders said they value her efforts above the Confederate generals she worked to stymie. “A badass woman,” one reader said. “We should be honoring people like her.” 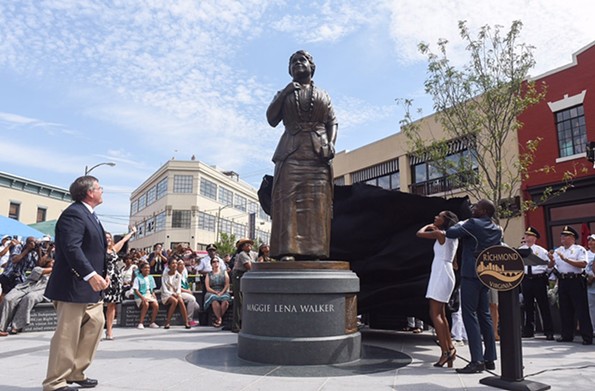 Born as the Civil War was reaching its end to a former slave who served as a cook in Elizabeth Van Lew’s home, Maggie Walker is easily the most recognized of many trailblazers who carved out new black political and economic power in postwar Richmond. Her involvement in the local Order of St. Luke chapter inspired her to charter a bank in 1901, noting that to put money in white-owned banks was to “feed the lion of prejudice.” She served on the board of a merged venture until her death in 1934.

Jackson Ward saw a statue to her dedicated in 2017. Voters want more.

“Her light is hidden on Broad Street where her statue is currently,” one wrote. “She forged a path in business, philanthropy, and community, that not only made a difference to her contemporaries, but continues to inspire today.”

The Richmond Dairy building’s mid-’80s enclave of artists and musicians gave birth to a band of mutants descended from space with a mission to destroy humanity.

Co-founder and frontman Dave Brockie, known by his Oderus Urungus avatar, led the Grammy-nominated shock metal band through cult fame brought by legendary, fake-blood-spewing stage shows and a cameo in 1995’s “Empire Records” as well as devoted praise from MTV’s Beavis and Butthead.

His sudden death in 2014 makes him the only 21st century person to make Richmond’s list. His legacy is carried on through Gwar’s continued recording and performing, and a beloved Jackson Ward eatery, Gwar Bar.

Mike Bishop, an early Gwar member who returned in 2014 to fill lead vocal duties as Blothar, was not surprised to hear of the vote results.

“I’m grateful that people are thinking of Dave, and of Gwar, and his achievements as something important to the city,” he says. “We’re honored by that.”

Votes that came in were split between naming Oderus Urungus and Brockie himself. Bishop would rather see Brockie honored as a human. Brockie, he says, would have preferred Oderus represented.

Brockie was recently interred at Hollywood Cemetery, where Jefferson Davis, J.E.B. Stuart and thousands of other Confederate soldiers are buried. The constraints on how he could be memorialized were frustrating, Bishop says. A monument would be a new opportunity.

“I think it’d be hilarious if he was riding a giant cuttlefish, mocking the Confederate statues with a sword in his hand, raised above his head.”

Recently, Gwar weighed in on the pandemic with a public service announcement, simply following the words of the commander in chief and encouraging people to drink bleach, as well as injecting and smoking it.

The only Confederate on Monument Avenue who died within the city, he was wounded during a battle in Henrico County and brought to the home of his brother-in-law on West Grace Street, now the site of Richmond police headquarters. He was buried in Hollywood Cemetery.

In 2017, following the white supremacist violence in Charlottesville, J.E.B. Stuart V, a Richmond-based hand surgeon, wrote in the Richmond Times-Dispatch that the monument should remain: “Eliminating the details of past injustice has never been a successful means of healing; it has just led to making the same mistakes over again.”

Two years later, Kehinde Wiley’s “Rumors of War,” modeled on Stuart’s monument, was unveiled in New York’s Times Square.
“
Art and violence have for an eternity held a strong narrative grip with each other,” Wiley said at the time. “‘Rumors of War’ attempts to use the language of equestrian portraiture to both embrace and subsume the fetishization of state violence.”

The two most lionized Confederate generals, Robert E. Lee and Stonewall Jackson, share the seventh slot, which means there’s no room for them.

One reader suggested Lee’s plinth remain in place while man and horse find a home elsewhere.

“A monument, not to the Confederacy,” they wrote, “but to the people brave enough to undo the hatred of the past. Instead of a pristine grass lawn, barren and uninviting in our city, the grounds should be remade into a park where everyone can be together, constantly celebrating the failure of his cause.”

We asked the American Civil War Museum if it would consider taking them in.

“No, we have not entertained the idea of acquiring any of the monuments,” a spokesperson said. “From a practical standpoint, we simply do not have the space, financial resources or the expertise to care for monuments of these sizes and scope.”

At least on paper, however, they’re gone.

Edgar Allan Poe, much beloved literary innovator. Ownership of his legacy also is claimed by Baltimore, Boston and Philadelphia.

Grossest Idea That Actually Works: “Newton Ancarrow [a boat builder and environmentalist] holding up a jar with a dead rat floating in it one hand, his other hand by his side clutching a sheaf of wildflowers.”

Most Cost-Effective: “Lose all the Confederates. Keep the horses. The horses didn’t know their riders were traitorous slavers.”

Not Playing Along: “No statues. Add playgrounds.”

Most Poignant: “I would dedicate a monument to the Afghanistan/Iraq war veterans. People sometimes forget about those wars, but I had lots of friends who fought in them.”

By the time John Mitchell Jr. organized a boycott of Richmond’s segregated electric streetcars in 1904, he had already earned a place on Monument Avenue two decades before.

He had already served on City Council and as a black newspaper editor fighting the emergence of Jim Crow. He had already survived an indictment over his reporting that a white police officer had beaten a black man to death.

Born during slavery in Richmond as the Civil War raged, 22 years later a story he wrote about a lynching yielded a letter sealed with a skull and crossbones: “If you poke that infernal head of yours in this county long enough for us to do it, we will hang you higher than he was hung.”

Mitchell first responded in his paper, the Richmond Planet, by quoting Shakespeare. Then he boarded a train, with two guns, and toured the scene of the lynching. “The cowardly letter writer was nowhere in evidence,” he reported.

From his seat on City Council, he voted against funding the Robert E. Lee statue. When it was erected, he published an editorial titled What It Means, writing: “This glorification of States Rights Doctrine — the right of secession and the honoring of men who represented that cause fosters in this Republic the spirit of Rebellion and will ultimately result in the handing down to generations unborn a legacy of treason and blood.”

We’re not sure where he would go on Monument Avenue, but he belongs there.