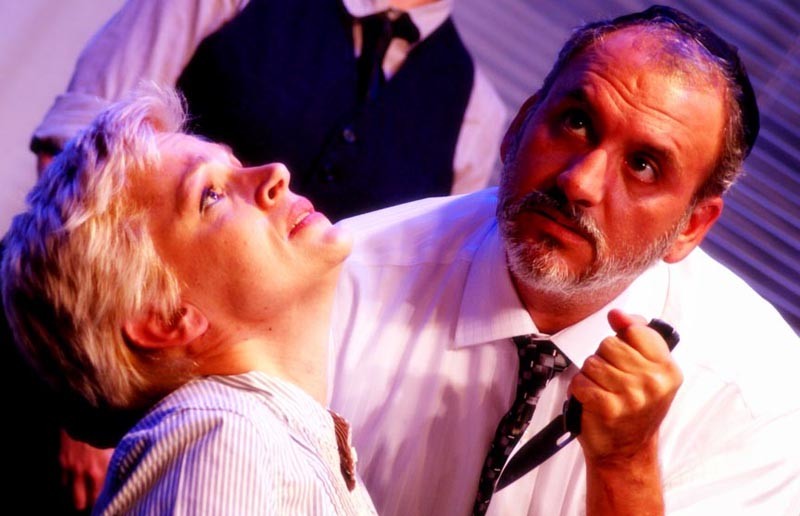 Shakespeare's "The Merchant of Venice" represents a significant challenge for the contemporary stage director. The play's anti-Semitism and racism can feel like a slap to a modern audience's collective face, and the comic high jinks of the romantic subplots don't quite counter-balance the disturbing dynamics of the climactic courtroom standoff.

Given this daunting starting point, director James Ricks has done an exceptional job with Henley Street's production of "Merchant" at the School of the Performing Arts in the Richmond Community's newly spiffed-up black-box space on Hamilton Street. Laptop computers and sharp suits (costume design by Stephanie O'Brien) place the action firmly in the present. The casting of a woman as Antonia (traditionally Antonio) brings a subtle sexual subtext to the fore. And entertaining diversions by bit players Adam Mincks and Keydron Dunn pump up the comic volume.

Ricks also makes intriguing choices regarding Shylock (played by Jeff Clevenger), the Jewish moneylender at the center of the play's machinations. Clevenger doesn't shy away from the usurer's malevolent characteristics but also captures the anger, hurt and humanity that spur his actions. Shylock still demands a literal pound of flesh from Antonia (Kim Jones Clark), who has borrowed a large sum of money from him to help her protégé, Bassanio (Greg Joubert), woo the heiress Portia (Liz Blake White). But Shylock's lack of mercy stems from a lifetime of mistreatment, the latest offense being the elopement of his daughter, Jessica (Lauren Davis), and her conversion to Christianity. Ricks's boldest choice is arguably his portrayal of Jessica at the play's end, hardly celebratory of what could be thought of as her good fortune.

"Merchant" can be an uncomfortable play to watch, and the younger cast members here aren't quite as compelling as needed to make the romance soar. Still, Clevenger and Clark are at the top of their games, White is resplendent as the sought-after Portia, lighting designer Andrew Bonniwell creates gorgeous scene-setting backdrops, and even the entr'acte music has a hip, playful vibe. With the innate challenges of "Merchant," it's one of the lesser-performed titles in the canon, making Henley Street's gutsy reimagining a unique opportunity to see this classic. Just be prepared for lots of conversation afterward. S

"The Merchant of Venice" plays at the SPARC Center for the Performing Arts, 2106-A N. Hamilton St., through Oct. 15. Visit henleystreettheatre.org or call 340-0115 for tickets.