How broken is the newspaper business? We're about to find out. 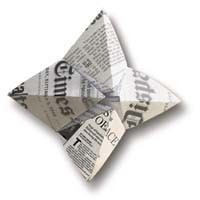 The good news: When the dust clears from the recession, analysts expect that most newspapers will be poised for a recovery. The bad: It's largely because they've fired at least a quarter of their newsroom, and the business model is still badly broken.

“There's a future, but it's going to be a diminished one,” says industry consultant John Morton, who also writes a column for the American Journalism Review. “We don't know how much of the advertising that these bigger dailies have lost — if they are ever going to get it back.”

For the most part the bigger dailies adopted a slash-and-burn approach to surviving the recession. Media General's publishing division, which includes The Richmond Times-Dispatch, reported a $5.2 million increase in operating revenue for the second quarter, but there's little to be excited about. The slight uptick came largely on the heels of drastic cost-cutting: To offset a $23 million decline in revenues for the quarter, the paper reduced operating expenses by 31 percent, or $28 million, primarily through layoffs, furloughs and salary and benefit reductions.

Blame it in large part on the triple whammy that hit classified advertising in late 2007 and has yet to let up. Real estate, automotive and help-wanted ads fell off the map, Morton says, and the question is how much of that lost ad revenue newspapers will recapture if and when the economy rebounds.

“When the recession is over and the recovery comes, it's going to be very dependent on how the automotive industry, real estate and jobs come back,” Morton says of the primary drivers of classified advertising. “In every past recovery, the newspaper has always been able to recapture what it lost in the recession. And just how competitive newspapers are going to be — we're going to find out.”

The outlook isn't good. While classified advertising moved online, spurred in large part by Web sites such as Craigslist.com, so did consumers. Web sites such as Zillow.com (real estate), AutoTrader and job sites like Monster.com have fundamentally changed the business model for newspapers. Traditionally, newspapers derived about 50 percent of their advertising revenues from classifieds, which offer higher margins than other newsprint revenue streams, says Conrad Fink, emeritus professor of newspaper management at the University of Georgia.

As for retail advertising, the other major driver of print revenue, the industry also has changed dramatically. Big-spending department stores — think Miller & Rhoads, Thalhimers and Hecht's — were replaced in the 1990s by big-box destination retailers such as Wal-Mart, Target and Kohls, which spend very little on newspaper ads.

“When Main Street retail gets the sneezes, we get pneumonia,” Fink says. “There have been fundamental restructuring in some types of U.S. business. The growth of Wal-Mart has driven hundreds of thousands of local businesses out of the retail business. Wal-Mart does very little advertising in newspapers.”

While newspapers have been adjusting to changing retail landscape for years — readers still gravitate to the Sunday sales circulars — the collapse in classified advertising was sudden and swift. Chances are the money isn't coming back.

Take the automotive industry. While some measure of real estate and help-wanted ads may trickle back into newsprint — Monster.com, expected by many to kill off print job ads, struggles as much as any daily newspaper — selling cars on dead trees may be a thing of the past.

“The first time that I noticed something was afoot was when CarMax changed its policy and stopped newspaper ads all over the country,” says George Hoffer, an economics professor at Virginia Commonwealth University who specializes in the automotive industry. “They just went cold turkey.”

In 2006, Richmond-based CarMax adopted a corporate policy away from newspaper advertising because it simply wasn't very effective for it. CarMax, the nation's largest used-car dealer, is built on what Hoffer calls “big-box technology.” Its computer sales database is so sophisticated it can pinpoint exactly what price, color and mileage at which a particular car is likely to sell any at any of its 100 stores.

It also tracks how customers find out about its cars. Namely through Web sites such as AutoTrader.com and Cars.com — in other words, not the newspaper. “Obviously, in using technology they must have concluded that the source of their leads was not the newspaper,” Hoffer says, adding that the company still does limited newsprint advertising when it enters a new market or targets a specific audience.

CarMax's realization doesn't bode well for newspapers. Many papers are still trying to sort out the impact of the recession, how much of the drastic reduction in revenues is cyclical, or recession-related, or because of a fundamental shift in advertising.

It boils down to simple math. As circulations declined through the years, the number of eyeballs an advertiser captures in print also has declined drastically, not to mention how they shop and compare prices. The CarMax lesson: National retailers have figured out that they can sell their products online as effectively, if not more so, than the newspaper.

For the most part, it's self-inflicted. Blame the gold rush to the Internet in the mid-1990s, when newspapers rushed to offer their content online for free.

“I've been in this business over 50 years,” Fink says, “and the single most grievous error was the early decision to give away its product for free on the Internet.”

Ryan Chittum, who writes about the newspaper business for the Columbia Journalism Review, says increase in online readership for newspapers across the country — in 2008 there were 67 million unique visitors to newspaper Web sites per month compared with 49 million newsprint subscribers — simply hasn't translated into advertising dollars. Despite the increase in readership, readers spend far less time reading news on the Internet — the average visitor to The New York Times' Web site, one of the most successful online papers, spends just 30 seconds per month on the site. And after 10 years of experimenting, studies show, online readers still dislike online advertising.

Newspapers generate just under 25 percent of their revenues from paid subscriptions, which means they rely primarily on advertising. The inability to generate ad revenues online is forcing most in the newspaper industry back to the drawing board — most are trying to figure out how to take back the content they've been giving away by charging online subscriptions, or erecting pay walls.

“There's not a newspaper that's free on the Web that's not seriously wondering how we can get money from the Internet,” Morton says. “They are going to figure out a way to start charging, and it will make a difference, but it will be a bumpy one.”

How readers react to being forced to pay for news they've been getting for free is an awfully risky move, however. And considering the state of newspapers today it simply may be too late.

“It's very difficult to get people to pay for the newspaper online,” Chittum says. “And when they do charge, it's mostly to protect the print edition.” He refrains from pointing out the absurdity of the idea: How many retailers offer products that they know customers won't buy? “They'll be studying this in the business schools for decades.” S