The Path to Eden 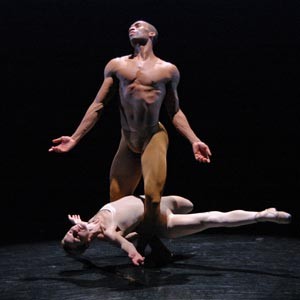 The last time Stoner Winslett saw choreographer John Butler alive, she says, “he was very sick, and he was very sweet. He said: ‘You know, Stoner, you're one of the few that I really trust. When I'm gone, will you help keep my work alive?'” She says she assured him she would, as his friend, and made good on her promise by not only including Butler's works in the Richmond Ballet's repertory, but also serving as president of the board of directors of the John Butler Foundation, which administers his works.

Butler, who died in 1993, was one of the few dance artists of the mid-20th century who studied both ballet with George Balanchine and modern dance with Martha Graham. His work was generally considered to be the first that strove to act as a bridge between those two worlds. Richmond Ballet's Studio 2, opening this weekend, will feature Butler's 1966 ballet, “After Eden,” an emotional duet between Adam and Eve after their fall from grace.

“We first did it, I think in the late '80s at the Carpenter Center,” Winslett says. “It was a big stretch for the company then, because it takes two very mature artists, technically and emotionally. Plus they're out there in nude tights, nude leotards. Nowhere to run, nowhere to hide.”

Two casts will dance the piece this time around: Maggie Small with Fernando Sabino, and Shira Lanyi with Thomas Garrett. Winslett says that “After Eden” reveals what's most important to her about Richmond Ballet. “It shows two people that are obviously beautifully trained, and they look like Michelangelo's chiseled, beautiful forms,” she says. “It is technically very difficult, but the most important thing about it is the emotion that it contains. It's not presentational at all; it's about two people, and the audience is really more of a voyeur, peeking into their world.”

Studio 2 also will include “Valse Fantaisie,” by George Balanchine, staged by ballet master Jerri Kumery. Set to Glinka's Valse Fantaisie in B minor, Kumery says the piece “is pure bliss in eight minutes. It's a classic waltz, and you go through the whole range of speed, of clarity, of jumping, of turning. Malcolm [Burn] said it's like a romp. A pure, wonderful, elegant romp. There's no story, but it's absolute joy at a high pace.”

Though she worked with Balanchine as a young dancer, Kumery hasn't performed this ballet. Because the work moves so fast, she says, Balanchine “always chose the smaller-medium girls.” But now, “We've got tall girls moving just as fast, which is incredible.” Kumery feels that dancers in the last 25 years have grown as artists and as athletes. She agrees that to some extent Balanchine's approach has become embedded in American ballet technique, and generations of dancers have internalized it.