The Passion of the Potter

"The Deathly Hallows Part 2" will please fans while the rest of us snooze. 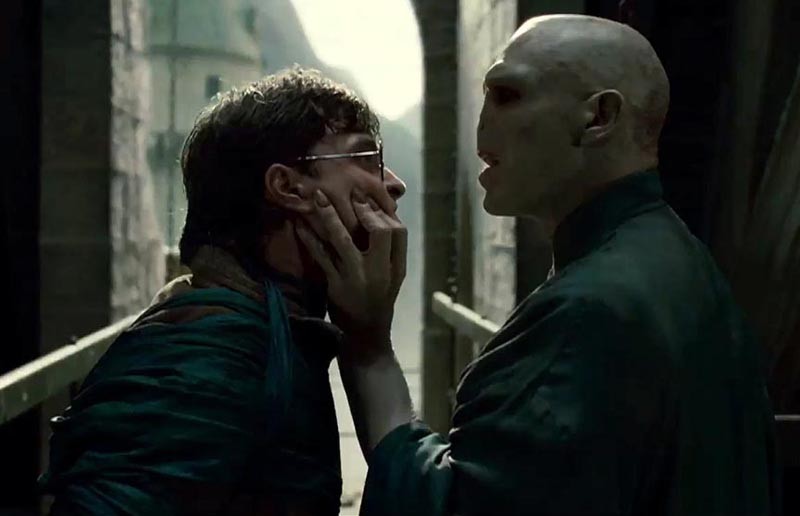 "It All Ends 7.15," announced the posters leading up to the latest — and supposedly last — "Harry Potter" movie. As a frequently confused audience member who's never read the books but seen most of the movies, I can only respond, "Promise?"

Most everyone agrees the "Potter" movies have been of varying quality, but none has quite equaled the books' ability to lure the uninitiated and put them under a spell. The reason is that the movies have concerned themselves more with visualizing the artifacts, characters and creatures while glossing over their interrelation, the layers of lore that have enthralled so many readers. That's why a fan might not be as bothered when this last chapter, part two of "Harry Potter and the Deathly Hallows," fails to explain what a Deathly Hallow is.

Directed by David Yates, the new movie does one thing better than the rest, limiting the usual cute but meaningless set pieces in favor of a more briskly paced narrative. Harry (Daniel Radcliffe), Hermione (Emma Watson) and Ron (Rupert Grint) remain on the trail of Lord Voldemort (Ralph Fiennes), destroying bits of his soul stashed in random hiding places of items called Horcrux. Though the movie doesn't stop to explain why the mighty Voldemort chose to leave them lying around in random objects, it does an entertaining job speeding Potter from one location to another while his nemesis hisses and fumes.

Likely the improved structure resulted, as much as anything else, from plot resolutions that no longer could be postponed. The marriage of Harry's search for the Horcrux and confrontation with Voldemort must be consummated, and come together like a "Potter" version of "The Lord of the Rings." If earlier episodes often seemed composed entirely of scenes completely independent of any grander scheme, this time we at least mostly know what's at stake, even if what's at stake sometimes begs the question of why the earlier movies were necessary (reviewer ducks to avoid the rocks being chucked for that one).

"If you need to ask," a ghostly being intones at Hogwarts during one scene, "You'll never know ... and if you know you'll never need to ask." More simply put, if the above is the kind of stuff you go for, you'll go for it. If not, proceed with the usual caution. Though this "Harry" is by far the most easily decipherable of the bunch, it isn't without its mysteries.

In the spirit of conclusions, perhaps it's time to question the wisdom of entrusting the entire series to the same child actors. Radcliffe is the obvious place to start. At first a cute kid who resembled the drawing on the book covers, he's since developed absolutely nowhere. No longer a kid, he seems more like a Harry Potter mannequin dressed up in fake blood, fake stubble and all-too-realistic department store attire. Given lines such as, "I need to talk to the goblin," he delivers with the energy and charm of an actor in an Ed Wood movie. He's worth more than $50 million and has the charisma of a grasshopper.

As for his time at Hogwarts, it's been a mixed magic bag of near escapes resolved by what only can be called the random magical intervention. The main excuse — faithfulness to the books — only holds up so far and part two of "Deathly Hallows" is no exception. To take but one example, Harry pulls out a special magic object at the end of the movie that, if it saves the day as hoped, will make meaningless everything the characters have been going through up to that point. It's like the hand of magic comes out of the sky to save the characters — without even bothering to explain how the magic worked. If that's so, why can't it save them a lot sooner? "I reckon he'll stop at nothing," Harry says of Voldemort at one point, though he might as easily be speaking of the screenwriter.

If there's one indisputable, universal draw to this last (but probably not really last) "Harry Potter," it's the sometimes haunting, sometimes bravely minimalist score by Alexandre Desplat, which truly is memorable. To paraphrase Orson Welles, if I ever had my eyes closed, I was just concentrating on the music. (PG-13) 130 min. S