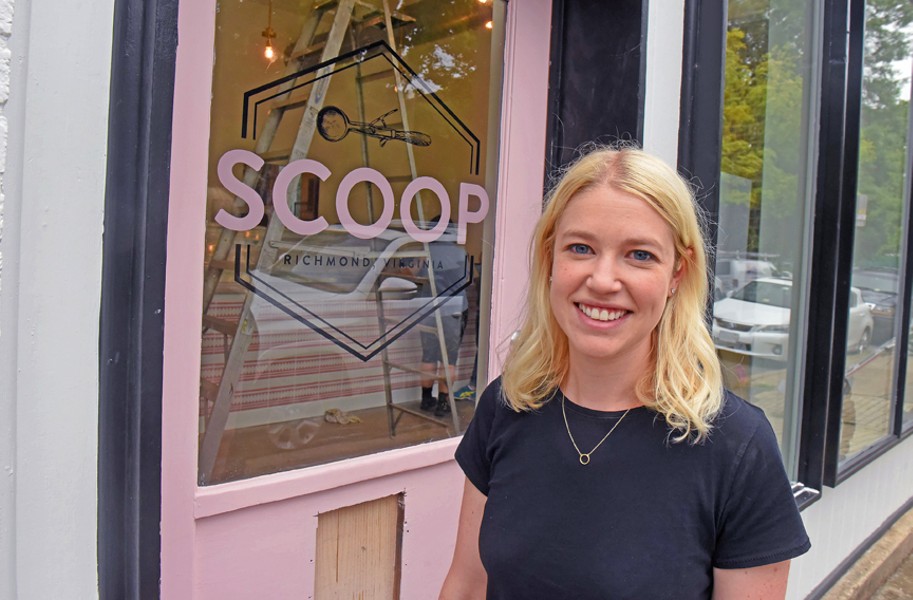 Scott Elmquist Morgan Botwinick will open the Scoop on Strawberry Street next week.

There's something profoundly simple and sweet about an ice cream cone on a hot day. It's meant to be eaten immediately, not something you can save for later. It's an ephemeral moment to enjoy before it passes.

"It's a complete indulgence. It's a total treat." says Morgan Botwinick, who owns Whisk Bakery and in late June will open Scoop on Strawberry Street in the Fan.

"A pastry could be breakfast or lunch. You can explain it away a little bit," she says, laughing. But not ice cream. "It's there to make you happy."

It may be made with only a few basic ingredients, but ice cream is an incredibly complex substance. And depending on the style and process it can be rich, light, soft, hard, fancy, plain, cheap, expensive, and as of the last decade or so, even vegan-friendly.

In the wake of the waning frozen yogurt fad, ice cream is having a moment again. In Richmond alone there are several new kids on the block, each with its own approach and style.

Armed with a culinary degree in pastries, Botwinick cut her teeth at the Jefferson Hotel before venturing out on her own, selling goodies at farmers markets and later setting up her own shop. Whisk, in Shockoe Bottom and known for its croissants, has been open for about two and half years, and continues to get busier.

"About a year in, I really started thinking about what the next thing would be," Botwinick says. It turns out she's loved making ice cream about as long as she's loved baking. "Ice cream is such a neutral palette that you can really be very creative with it."

The name, Scoop, came first. Then came the space, and the culinary concepts. Though she wasn't yet actively searching, Botwinick noticed a "for lease" sign next to the row house that Video Fan occupied for more than 30 years and thought, "I have to have it."

The five-month renovation required substantial plumbing and electrical work to convert the retail space into a shop that houses a charming front-of-house foyer for customers, a walk-in freezer in the back where small batches will be churning, as well as an office and a second kitchen for Whisk upstairs.

The design aesthetic, beginning with a pastel pink front door, is clean, modern and happy. Like Whisk, the exposed brick and industrial accents, such as gold light fixtures, are inspired by the building. The pink and white tile inside makes everything brighter.

The same can be said for the menu.

"We always try to put a little twist on something that's kind of traditional," she says.

The menu features nine signature flavors, which Botwinick says "hit all the categories" that patrons expect. You'll find such classics as vanilla, chocolate, mint and caramel, but there's something a little unexpected about each.

Some seasonal flavors are inspired by the weather and available produce, like the rhubarb crisp and roasted strawberry. Others are quirky experiments, like earl grey and tahini, which Botwinick loves so much she considered adding it to the list of signature flavors right away.

And while it's all about the mix-ins at Scoop, a few additional toppings also will be available, like Virginia peanuts, rainbow sprinkles, and for something a little different, cacao nibs. Botwinick is aiming for an opening day during the week of June 18, and the Richmond summer is sure to be a sweet one. S