City Treasurer Eunice Wilder, the mayor's ex-wife, would love more work to do — sort of. 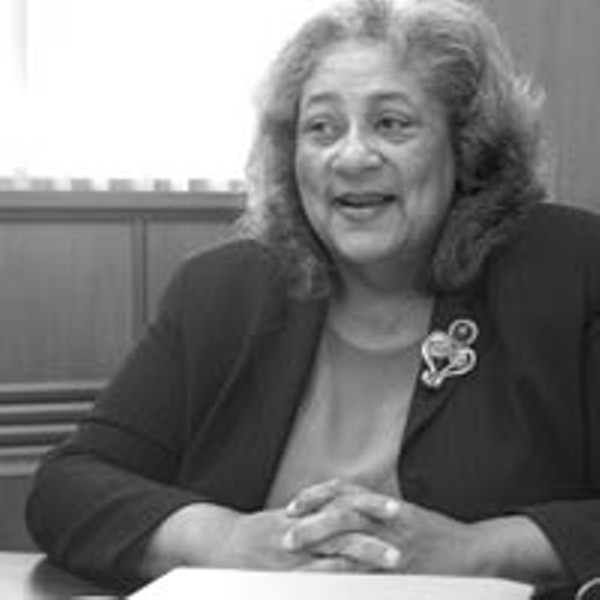 Her ruling philosophy appears to be this: Provide excellent customer service to her very few customers.

Many people who come to the office have picked the wrong door and need to be gently pointed elsewhere to pay their gas bills or get marriage licenses. Some even come with handfuls of foreign currency, thinking the treasurer will be able to exchange it.

"Almost everything we don't do," Wilder says. Yet no matter the request, she says she and her staff try to provide answers and "service with a smile."

Wilder, a constitutional officer, is paid by the state an annual salary of about $78,500. She was initially appointed to the position by the Richmond Circuit Court judiciary.

Some wonder if the office is necessary. After all, city residents can apply for passports at 12 other locations in Richmond. They can purchase hunting licenses at seven other places in the city, as well as online or by mail. Notaries abound. As for free tax help, the Virginia Department of Taxation invites Richmonders to visit its walk-in center at 3600 W. Broad St.

Four years ago, retired financial officer Ramon Brinkman ran for Wilder's office. His campaign theme? If elected, he'd propose legislation to eliminate the position. The office of treasurer was "a damn useless office" with no real responsibilities, he said, because the treasurer's chief duties were passed along to the city's Department of Finance when the city charter was revised in 1971.

Brinkman lost to Wilder by almost 16,500 votes. "The voters really didn't give much of a damn," he said later. Wilder says she doesn't want to remember her one-time rival. "I really felt bad with the things he was saying," she says.

But Brinkman is not the only person to question the usefulness of the office. While many Virginia localities have treasurers, only four have treasurers that neither collect nor disburse public revenue: Lynchburg, Franklin, Galax and Richmond. As of Jan. 1, in accordance with a voter referendum and legislation passed by the General Assembly, Galax will get rid of its treasurer for good.

When the city got a finance director, the treasurer became obsolete, says Delegate Charles W. Carrico Sr., R-Galax. "There was no sense in having the two positions at the same place."

According to Wilder, the Richmond city treasurer fulfills an essential role: as champion for Richmond's low-income citizens on matters of taxation.

Just a few weeks ago, she says, a man came in who owed $2,000 for four years of unpaid federal taxes and was afraid to file with the state for fear he'd owe more. He made only about $11,000 annually, Wilder says, most of which was disability income that goes untaxed by the state. After three hours on the phone with the IRS, she arranged a reprieve so her client wouldn't have to pay back taxes until his income increased. "And I've got plenty of stories like this," she says.

Wilder says she is the only elected official who is virtually always available to speak one-on-one with citizens. Of course, other elected officials, such as the city sheriff or the commonwealth's attorney, have a lot more to do. Wilder sometimes laments this fact, saying she wishes she had more work. Thus far, she's not done much to seek it out.

Wilder does not advertise her services as a free state tax preparer. She said that four years ago she was considering ways to make the office more visible so more Richmonders would know about the services she provides. She says in 2004, about 2,500 people came to the office for tax help and other reasons. Many are repeat customers.

Trouble is, "if I told everybody, 'Come on down,'" Wilder says, she wouldn't be able to handle the demand during tax season. Gov. Mark Warner's 2002 statewide budget cuts reduced her staff from four to two. So she nixed the public awareness idea.

City officials have thwarted her efforts to get more work, she says. She used to send out a notice with information about her services and tax due dates once a year in residents' utility bills, but the Department of Public Utilities put a stop to that. She was told it cost too much and there wasn't enough space in the newsletter, which was needed for more important purposes. "Well, I saw a pie recipe in one!" Wilder says.

Once, she says, her office collected Richmonders' estimated state-tax payments. The first quarterly payment would go to the city finance department, and then the next three would be collected by the treasurer. But over time, Wilder says, as finance directors came and went, that policy was abandoned, and the finance department began collecting almost all of the tax payments.

"They'll act like, 'Oh, we didn't know,'" she says. "There's a couple people down the hall wish we weren't here," she adds obliquely.

Wilder hasn't discussed the matter with the city's newly appointed chief financial officer, Harry E. Black. But she will, she says, "because I want the work."

City officials recently proposed that Wilder head up a new program of booting cars that have outstanding parking or decal violations. They suggested she ride around with a sheriff's deputy and point an electronic scanner at cars' license plates to see if the driver owed money. Wilder demurred.

She's a constitutional officer, she says, and should not take on city functions such as booting cars. And what about the liability? she asks. Not to mention the job wouldn't exactly contribute to her electability. "Who wants to be known as the boot person?" Wilder says.

Wilder doesn't pay rent to City Hall and gets agitated when the subject comes up. Nor is she pleased when asked if she ever runs into Mayor Wilder, her ex-husband.

The two met at Howard University and married in 1958. They divorced 20 years later in a bitter proceeding, and the records were sealed long ago at Eunice Wilder's request. She says she's only seen the mayor twice in City Hall. Occasionally she glimpses him through the window of her office, when he's "probably going to get a coffee or sandwich or something." And their parking spaces in the underground garage happen to be directly across from each other.

Wilder, 67, says she doesn't intend to retire anytime soon. "I like it here," she says.

She does not, however, look forward to elections. "I don't like to even think about them," Wilder says. When Style requested an interview in the early summer, she refused, saying she would prefer to talk to a reporter in July — safely after the filing deadline had passed for candidates in the November election. She seemed to be concerned a news story might invite competition.

In November, Wilder was re-elected for another four-year term, receiving 41,508 votes. There was no one else on the ballot. S