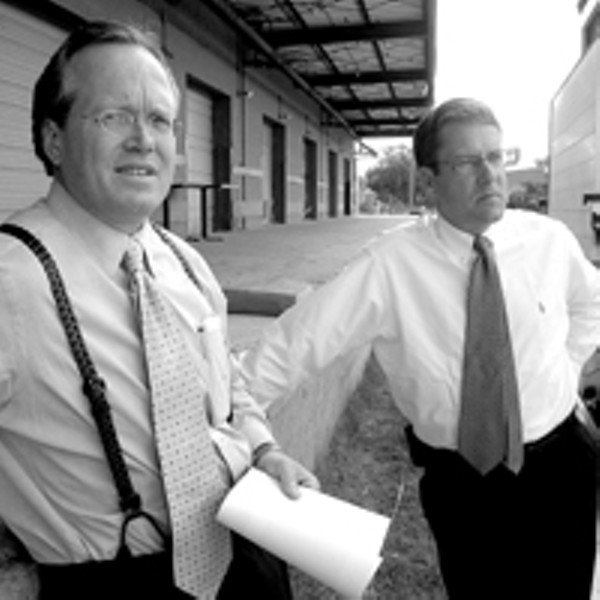 The Richmond Braves, still reluctant to endorse the idea, are taking a closer look.

“All they showed me was pretty pictures,” says Bruce Baldwin, general manager of the Braves, of a meeting with the Mayo group three weeks ago. “I would like to see the plans. ... If there is a compelling story that Richmond and the Richmond Braves should do this, then they need to step up to the plate in a hurry.”

The Mayo plan is being shepherded by Charles Macfarlane, a local developer, and James Snyder, president of architectural firm Odell Associates. The two are working overtime in a duel with the Richmond Ballpark Initiative, a group of local business owners who want to move the Atlanta Braves’ top farm club to Shockoe Bottom. Macfarlane and Snyder insist they aren’t trying to trump RBI — Macfarlane says he’d gladly hand his project over. But their argument for Mayo Island, where Tate Field hosted the Richmond Colts in the early 1900s, does just that.

“All we’re saying is, there is a choice,” Snyder says. “Instead of tearing down history, you can rebuild it.”

The Mayo backers are months behind RBI in due diligence. There haven’t been any official traffic studies, for example, and as of June 4 the group had yet to formally present its plan to city leaders or RBI. But the Mayo pitch has the potential to gain momentum as preservationists continue to attack the Shockoe ballpark plan.

Baldwin says the initial report from RBI’s architects last summer took Mayo out of contention. A stadium wouldn’t fit, and access was limited.

Macfarlane and Snyder counter they have the architectural and engineering renderings to prove a stadium would fit. “We’ve done the measurements,” Snyder says. “There’s 400 feet to center field. We can get 305 feet to left-center field. We’ve come up with a plan that is unique, that accommodates the geometry.”

As for access, Mayo is barely a mile from the Shockoe site, and Macfarlane and Snyder say there are some 4,500 parking spaces within four blocks of the island, of which 800 to 1,000 spaces would be located across the 14th Street Bridge. They could close the bridge to traffic during games, as well, so fans could safely walk to and from the field.

The Mayo team says the other key advantage of their plan is protecting history.

The Shockoe stadium, north of the Farmers’ Market along 17th Street, would require the demolition of several buildings in the Bottom, an area registered on national and state historic registries. And it would sit on the site where Richmond’s slave trade flourished in the mid-1800s, with infamous slave pens Lumpkin’s Jail and the Omohundro & Betts Slave Jail.

Mayo’s history, on the other hand, is baseball. It’s where the original Tate Field — home of the Richmond Colts — was located from 1921 to 1941. Babe Ruth and Lou Gehrig played there, and legend has it it’s where Ruth hit the longest home run in baseball history. The ball landed in the coal car of a passing train, according to the legend, and eventually was discovered up North. The new stadium incorporates a late 1800s architectural design — another team called the Giants played there in the 1890s — and Macfarlane and Snyder suggest calling it Tate Field or Babe Ruth Stadium.

The Mayo plan may also be easier to get off the ground. It involves fewer property owners, and has potentially lower land-acquisition costs, Macfarlane says. The island’s two property owners — the family of Dr. Fred Shaia, which controls most of the land, and Louis Heindl — have indicated a willingness to sell for an estimated $3 million to $4 million.

And last week, Snyder says, the Mayo team reached a verbal agreement with landowner Tony Lanasa to sell about 6 acres along the flood wall near Southern States south of the island. It could be used for parking, condos, office buildings or retail, Synder says.

But what about a key obstacle, flooding?

While the former Tate Field flooded often in the early 1920s and 1930s, the island is now at a much higher elevation, Macfarlane and Snyder say. The stadium could be constructed to weather the highest flood in Richmond history, they say. As for the baseball field itself, plans call for a removable, natural-grass playing surface manufactured by GreenTech Inc., like the one used at Virginia Tech’s Lane Stadium and the Meadowlands in New Jersey.

The elevation of the stadium would sit at about the same height as the flood wall, they say. If it does flood, it wouldn’t exactly put the Braves out of business, says Alan T. Shaia, part owner and management agent for Mayo Island. “Like normal baseball, they always have rain days,” he reasons.

As for financing, Macfarlane says the stadium could be built without a major developer, if need be. Assuming Richmond and the counties of Chesterfield and Henrico are still willing to put up $18.5 million for a new stadium — what they originally committed to renovate The Diamond — the park could be built with expected rents and capital from the Braves, and some additional public funds for improvements from the city. For example, a sewer hookup would need to be added to the island, costing between $500,000 to $750,000.

Macfarlane says he’s spoken to a member of RBI who says the Braves have agreed to finance as much as $20 million, including rents and capital, for a Shockoe stadium, so he figures the same should be available for Mayo.

Baldwin, however, scoffs at the idea.

“For someone to go out and suggest that I’m going to contribute $20 million is more than just speculation on their part,” he says.

Tim Davey, chairman of RBI, says as far as he knows no one at RBI has had any contact with Macfarlane or Snyder about financing, or any aspect of either stadium proposal.

“They haven’t picked up the phone and called me up,” he says. “I look forward to it when they are ready to sit down and talk about this.”

The Mayo plan does have some deep pockets behind it. Macfarlane, director of the Virginia Department of Aviation, is a real-estate developer who has close ties with Childress Klein Properties, one of the biggest real estate and development companies on the East Coast. Macfarlane says Managing Partner Fred W. Klein has agreed to push the project forward if it “gains traction.”

Snyder says he and Macfarlane aren’t interested in actually building the stadium, just packaging the site and shopping for a developer to see it through. Klein has, in essence, agreed to put up “a couple hundred thousand,” Snyder says, for the “more definitive due-diligence effort.”

What are their motives?

Like RBI, Macfarlane and Snyder say they are civic boosters. They deny any financial interest in moving the Braves to Mayo Island. But Snyder’s architectural firm, which has done more than a half-dozen ballpark and stadium designs across the county, certainly would be interested in winning the stadium contract, Snyder suggests.

Macfarlane, who lives in the Church Hill’s Adam Craig House, which was built in 1785, says he isn’t crazy about moving the team to his back yard. “I’m not thrilled to death with it,” Macfarlane says of the Shockoe site. “But I’m not opposed to it.” S