With crowds and traffic about to descend on downtown for the big bike race, Richmond restaurant owners prepare for the unknown.

by Brandon Fox and Peter Galuszka 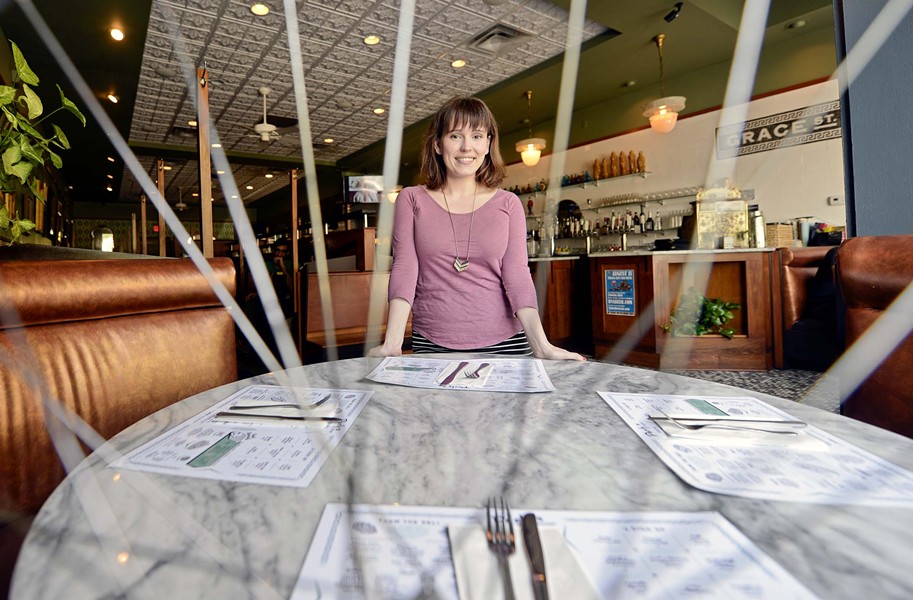 Ash Daniel For Perly’s Restaurant & Delicatessen downtown, the key to surviving the bike races is cooperation. Rachelle Roberts says she’s trying to organize a distribution network for vendors among six or seven other area restaurants.

It was the best of times, it was the worst of times: Charles Dickens may have been talking about the French Revolution but Richmond restaurateurs can relate. They’re deep into the logistics of preparing for the UCI World Road World Championships hitting Sept. 19.

The biggest concern is getting food into kitchens and out to customers — and no one’s quite sure how many spectators might walk in to have a meal at the eateries near the busiest routes.

“How is the bike race going to work?” Shockoe Whiskey & Wine’s Chris Randolph says. “People are going to get hungry and we’re going to feed them.”

Because traffic may keep deliveries from running during normal business hours, many restaurants have arranged with suppliers to deliver in the middle of the night and plan to stock up on products ahead of time.

Other restaurant owners, especially those directly on race routes, are assembling informal co-ops to get deliveries.

“We’re trying to organize with six or seven other restaurants in our area to have a distribution among the vendors,” says Rachelle Roberts, of Perly’s Restaurant & Delicatessen. “If they can’t make a delivery, they can drop it somewhere nearby, and we’ll go over there to pick it up after the traffic clears.”

Roberts says she’s uncertain of what will happen: “We may have to do an abbreviated menu.”

“I have felt the economic impact already in a negative way,” he says. Two large parties recently canceled reservations during race week because they were concerned about traffic and road closures. Does he think he’ll make up the business with walk-ins? “I’m never a negative person,” he says, “but I’m not banking on it.”

Christopher’s RunAway Gourmay typically has four food carts that work the downtown business crowd. But owner Chris Zechini says he’s giving up for the week because the logistics make it too complicated to get the food out.

A restaurant in Manchester, Plant Zero Café, will close that week for its annual holiday. So will Oregon Hill's Mama ’Zu.

Pasture, which will be boxed in by the route at East Grace between Third and Fourth streets, plans to change its hours. “We’ll be open at 10 a.m. and not 11:30, so people can get grab-and-go breakfasts,” co-owner Michele Jones says. “We’ll be open Sundays, which we don’t normally do.”

But concerns aren’t only about food — they’re also about the people who get the food out. Jones says the city told her there will be an easy route for employees to get to work, but she doesn’t want to take chances. “I’m telling anyone who lives nearby to ride their bikes to work,” she says.

Eat Restaurant Partners has sent out an impact summary and action plan to all of its employees. Two restaurants directly on the route, Foo Dog and Fat Dragon, also will extend their hours to accommodate spectators. “Foo Dog is ground zero for the last four days of the race,” the plan says.

David Dunlap of Maple & Pine at the soon-to-open Quirk Hotel has the dubious honor of opening a new restaurant two days before the race starts. But the upside is the exposure offered by the race, he says: “If I have to carry product on my back to get it there, that’s what I’m going to do.” S

CORRECTION: This story originally said that Rancho T would be closed during the race. It will be open and ready for business all nine days."We are going to do our best to serve anyone that wants to eat. May be a challenge, but we are up for it," says co-owner Tuffy Stone. We regret the error.