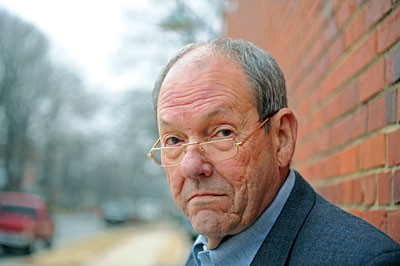 Lesson No. 1: Don't get John Butcher worked up.

At crankytaxpayer.org, the retired state employee has created a compelling, fact-driven condemnation of how the Richmond Public Schools conduct business. The hundreds of pages that the tall gentleman from the 4th District has generated are by turns shocking and maddening. On his website, he charts everything from manipulated school test scores to horrible attendance figures. One striking report details how a pair of simple handicapped parking spaces at Westover Hills Elementary School cost more than 10 times what they should have (he even prices it out for you).

Aÿ“Our school system is hideously expensive,” Butcher says, in a John Huston-like burr of a voice. “They are wasting, by my count, $30 million a year. And they get lousy results. This despite the fact they've been cheating on their numbers. It's clear that this is a system that is more set up for the adults than for the kids. I don't know what you'd call that — I'd call it an outrage.”

Born and raised in Sarasota, Fla., Butcher was a chemistry teacher at Hampden-Sydney College when he got tired of science. “I knew the truth,” he says, “now I wanted to learn advantage.” He enrolled at University of Virginia's law school in 1975 (“it only cost $1,000 a year then”) and after graduation found himself working in the Virginia attorney general's office. He retired in 2002.

“He has real value to offer,” current school board member Kim Gray echoes: “There is a lot of good info on that site, and his experience in the attorney general's office gives him a degree of credibility beyond that of just a solitary, disgruntled taxpayer.”

Still, correspondence with one prominent civic leader yields this response: “Who's John Butcher?”

Butcher isn't surprised — he says he's used to being marginalized. “It is clear, in some circles, and I give Mr. [Jim] Ukrop credit for pushing this, that if you criticize the school system, it is harmful. I happen to be of the view that pointing out the defects could be effective and constructive, or might be.”
Butcher once took his findings directly to the school administration “in a spasm of naivetAc,” he says. Wolf, who relied on Butcher's number crunching during her stint on the board, recalls what happened: “He took on the issue of wasted space in the buildings, came down to School Board and made a presentation. He found out in one night what it took me six years to get — the board isn't interested in listening.”

Ever since, Butcher has held a low opinion of “that bunch.”

“You see it all the time,” he says, sighing. “Folks get elected to the board with lots of bright ideas and they end up drinking the Kool-Aid. We've never had more than two board members asking questions at one time. They are currently beating up on Kim Gray, and before that it was Carol [Wolf] and then Keith West. Just look back and you'll find they ostracize anyone that doesn't sing their song.”

In 2008, Butcher made his presence known by filing a Freedom of Information Act request for documents relating to the dismissal and compensation of outgoing school finance director Tom Sheeran. When the schools didn't produce the papers, Butcher took them to court. He not only won the case, the judge ordered that if RPS administrators denied John Butcher any future documents, they would be held in contempt..

School Board President Kim Bridges says she's never met Butcher in person. She doesn't dispute his raw data but maintains that it's out of date. At one time the Richmond schools had problems, she says. But “things are turning around now. Dissent is part of the process. … All public input is helpful.” She says that the current School Board is “more apt to listen to solutions rather than fixate on the same old data.”

Butcher says that the solutions have been obvious for some time: “You put in a principal that is good and you give him or her the power to do the job and you hold them accountable,” he says. “You make sure that the kids learn. If they don't, you fire the principal.”

And the financial waste has got to stop, he says. "Until we get a zero-based budget out of the school system, or until somebody audits the schools from top to bottom, we won't know what's going on there. Right now you can't see where the money is going."

Butcher has gone back to work “half-time,” he says, and acknowledges that he isn't updating his website very much. There's no atmosphere for real reform anyway, he opines. “We have seen in Washington, D.C., and New York that if you are going to take on one of these big systems, it's a huge job and it takes a fair amount of confrontation. It doesn't seem like anyone around here is willing to do that.”