The Nicest Kids in Town

Broadway in Richmond’s “Hairspray” takes up residence at the Altria Theater. The Broadway touring cast of "Hairspray," which runs this week, Jan. 24-29, at Altria Theater.

In order to be cast in the Broadway tour of “Hairspray,” Emery Henderson had to wait.

Though she received a call back for another audition, the pandemic hit, essentially grounding all professional theater in America. The following April, she auditioned again and was cast as Penny Pingleton, the perky best friend of main character, Tracy Turnblad. Since then, “Hairspray” has been her life.

Getting a role in the show has been a long time coming in more than one way for Henderson, who first encountered the musical as a kid through the 2007 movie adaptation with John Travolta and Michelle Pfeiffer.

“My siblings and I would sing it,” recalls Henderson, who grew up in western Massachusetts. “I would pretend to be Tracy, singing ‘I Can Hear the Bells’ around the living room.” 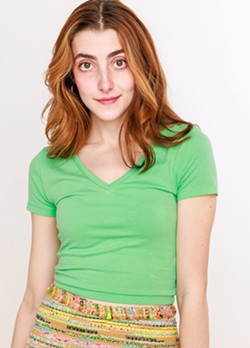 When notice goes out that the show is holding auditions to find a new teen dancer to fill a vacancy, Tracy decides to audition. This sets in motion a story of acceptance, self-empowerment and romance as Tracy and her friends decide to desegregate “The Corny Collins Show.”

In honor of the Broadway musical’s 20th anniversary, this tour is using Jack O’Brien’s original direction and Jerry Mitchell’s original choreography. In its review of the original Broadway production, The New York Times said “Hairspray” was “as sweet as a show can be without promoting tooth decay.” In 2003, it won eight Tonys, including for best musical, best book and best score.

“The show is just this welcoming, accepting celebration that is so well-received by an audience,” says Henderson, adding that the spectators have been vocal in their response.

“The show itself is going to make you scream, dance, laugh,” she says. “It’s pretty across the board. People of all ages come to see it. We have kids, we have teens, we have adults. A lot of old people too. That’s the wonderful thing about it: because everyone has the same reaction of loving the music.”

That score is filled with ’60s-style pop songs by Marc Shaiman that recall Motown, Lesley Gore and Elvis Presley; Shaiman and Scott Wittman wrote the lyrics.

On this tour, Andrew Robert Levitt, who performs drag under the stage name Nina West, will be playing Edna Turnblad, Tracy’s plus-sized mother who was portrayed by legendary drag queen Divine in the original movie. Levitt appeared in the 11th season of “RuPaul’s Drag Race.”

“A lot of his fans come to see the show and are so delighted,” Henderson says. “He’s really doing the role justice.”

Henderson, who recently celebrated her 300th show with the tour, says the musical’s message of inclusion is heartwarming.

“It’s so accepting,” she says. “We’re portraying this ideal version of the world that is just so wonderful.”

Correction: We misspelled Emery Henderson's name in a caption. Style regrets the error.