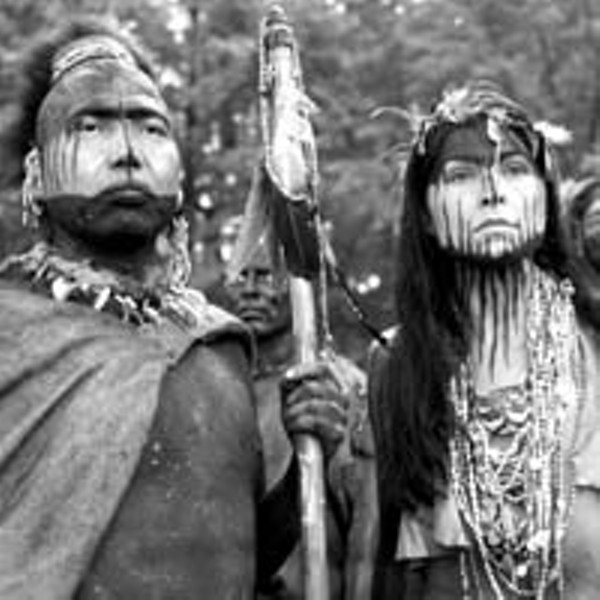 During production, West relied on artisans from the area to help make and design Native American regalia, costumes, jewelry and masks — all were made in Virginia.

"We used a lot of local artists and students who were quite brilliant. It was one of my favorite crews," West says. "Andy Richardson helped make Pocahontas' costumes and made Powhatan's beaded leather cape. We shot part of the film on his family's property. Lynalise Woodlief and Karen Wolfe made all the jewelry. There were fabulous."

West's praises for her Richmond crew continued with mention of Jenny McGurk, who worked with the headdress and made the feather cape that Powhatan wears in the film; Susan Antonelli, who dressed Pocahontas and also crafted jewelry; and Gillian Brown who created the masks worn in the film.

Executives from the production were excited about the wealth of local artists, artisans and craftspeople in the Richmond area when they were considering Virginia as a film location, says Mary Nelson, communications manager for the Virginia Film Office.

"[The production] made full use of artisans from the area," she says. "Richmond is filled with talented artists and craftspeople, thanks in part to the exceptional training in the arts that students are getting at Virginia Commonwealth University and the University of Richmond."

Luckily for West, "The New World" wasn't her first film. She started as a costume designer in 1989 after a successful career as a fashion designer — her Jacqueline West Contemporary Sportswear line had its own design department in Barneys in New York, Los Angeles and Japan, as well as upscale Fred Segal in Los Angeles.

"I'd done [fashion] designing for a long time," West says. "I found the film business captivating, ever-changing. It was appealing to me. Now every movie is like starting a clothing company. Each allows me to crawl into a different time and lead a different life. There's something quite thrilling about that."

To date, West has worked as a costume designer on about 11 films, including "Rising Sun" with Sean Connery. When her agent called about "The New World," she was thrilled. "It was an opportunity to work with Terry Malick, who is one of the most iconic directors living," she says. "I fell in love with the script."

Five years ago, West and her husband moved from San Francisco to Deadwood, S.D., near the Sioux Nation. Her fascination with Native Americans and their culture goes back to her childhood. "The [thought of] working on 'The New World' was captivating to me," she says. "I would have the chance to portray the first contact between Native Americans and the British."

When she began researching the period, West was, at first, a bit discouraged. "There wasn't a lot of material available on the Powhatan Indians," she says. "There were few visuals, some etchings and drawings, those of John White [for example], which were more classical. More was written about what they looked like. I had to translate that into something that would portray them better on the screen."

West dug through her extensive Native American home library for inspiration. "I read the complete works of John Smith and Pocahontas and 'Native American Myths and Legends' by Colin Taylor. I did vast research."

Creating the costumes was a challenge, she says: "The mere number of costumes was daunting. Every one of them had to be unique and have different jewelry. Terry wanted all the various tribes to be different but also have a similar thread running through them."

Like most films today, "The New World" was shot out of sequence. "That's tricky," West says. "We had to keep the British dirtied down in the beginning and show them cleaned up as [the area] was cleaned up."

On a personal level, West hopes that Native Americans will feel that her work is respectful and correct. "I had a lot of help from some of the chiefs in Virginia," she says. "Chief Robert Two Eagles Green of the Patawomeck even gave me wild turkey feathers that we used for Powhatan's feather cape."

The film's challenges now seem ancient to West, who's just wrapped "The Visiting" with Nicole Kidman in Baltimore and is now working on a costume exhibit for "The New World" at the Fashion Institute of Design and Merchandising in Los Angeles. She's hoping that when Academy Award nominees are announced, she will hear the film's name at least once.

"Every time I attend a premiere of 'The New World' I love it more," she says. "Terry is quite amazing as a storyteller. He's so lyrical. Each time I see the movie, it's a different movie for me — I see it on different levels." S

For more information on "The New World," such as where it was filmed and who the crew worked with, go to www.jamestown1607.org.