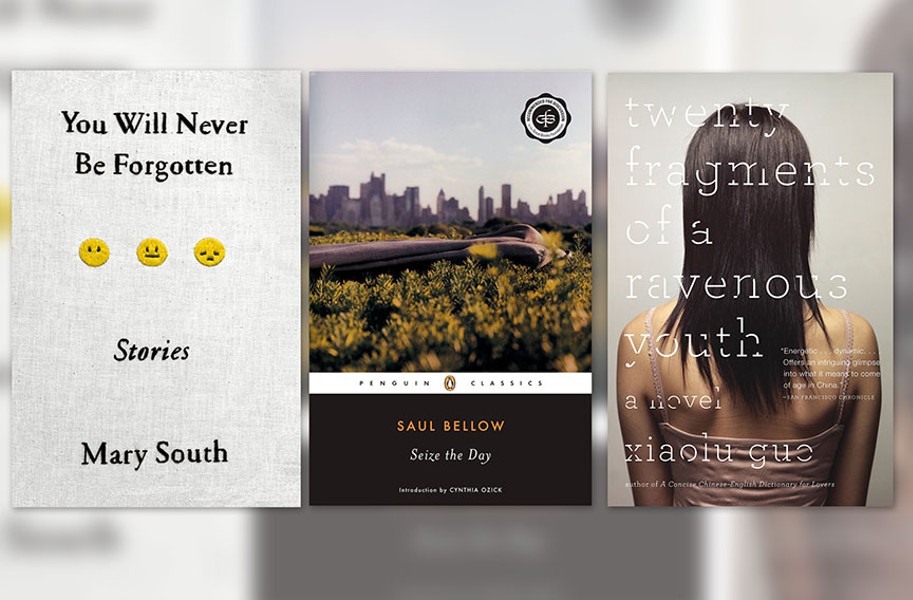 Funny, daring, smart, South’s stories put us in an alternate world that doesn’t seem all that far off from modern-day society. From boot camps organized to curb internet trolling to a neurosurgeon who feels “betrayed by the brain” after seeing recovered patients continue to burn away the planet, the characters in this collection are instantly relatable as they attempt to make sense of a society on the brink of collapse.

Often these stories focus on caretakers and patients, and how the ones who survive are often the ones who are forgotten. The caretakers are unable to separate themselves from the job, even in dreams, experiencing trauma through transmission as they cross barriers, break ethical codes and attempt to administer questionable, alternative treatments.

South, who has already garnered comparisons to the likes of Aimee Bender, Karen Russell and Etgar Keret, delivers an uncomfortably comedic reality that we might just have to accept.

Noble Prize winner Saul Bellow’s short novel, initially released as part of a collection of stories and as a play, about a man down on his luck and out of options is as epic a portrait of the American individual today as it was in the mid-20th century.

Bellow’s frenetic everyman, who battles with body, mind and spirit, often wondering why them and not me, takes the form of Tommy Wilhelm, an overweight, middle-aged ex-actor betting on a long shot to get a piece of the American dream.

Invested in commodity trading with a practicing psychologist, he’s trying to prove he’s a success while trying to define what it means to be successful. His greatest fault is his curiosity about what another life would be like with a new wife (there’s mention of a lover named Olive), financial stability and renewed confidence. The feeling of being alone, misunderstood and soon forgotten permeates this story as it does in the other two books recommended here.

With an ode to Herman Melville’s “Bartleby, the Scrivener,” the impossible predicament made of Wilhelm’s own choosing becomes the story’s greatest conflict, and, in the end, he is broken not from playing the game, but from playing the wrong one to begin with. Towards the end of the novel, Wilhelm, talking with his suspicious psychiatrist and business partner, Dr. Tamkin, says, “A person can become tired of looking himself over and trying to fix himself up. You can spend the entire second half of your life recovering from the mistakes of the first half.”

“Twenty Fragments of a Ravenous Youth” (2009) by Xiaolu Guo

In Guo’s second novel, we sense the vastness of Beijing through the day-to-day life of a young, struggling actress. Fenfang is an extra and aspiring screenwriter in the paradoxical city, where ingenuity, modernism and expansion are at odds with a male-dominated society willing to embrace capitalism while stifling free expression.

She is in love with her ex-boyfriend, Xaolin, but, like her past, she knows he’s someone she must leave behind if she’s ever going to move forward. Through interactions with producers, directors and American expats, Fenfang attempts to assimilate to the future of China, while the person she once was in her small village slowly disappears.

In a country much larger than ours, with a history much deeper, we feel the weighted impact of Americanization in China’s capital through Guo’s concise and biting prose. Guo writes, “People always say it’s harder to heal a wounded heart than a wounded body. ... It’s exactly the opposite – a wounded body takes much longer to heal. A wounded heart is nothing but ashes of memories. But the body is everything.”