Because we could all use a good book about now. 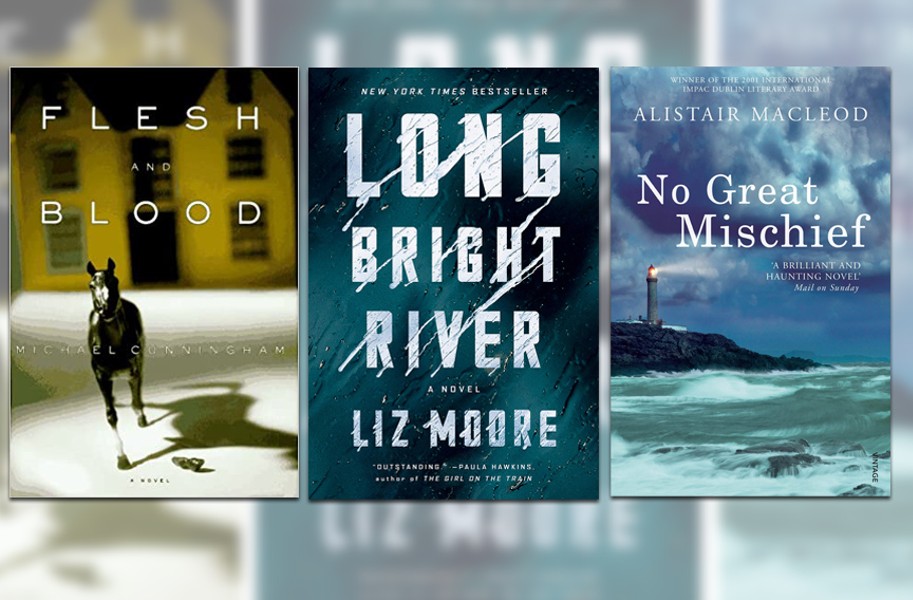 This novel begins as your typical procedural thriller about two sisters, one a drug addict, Kacey, who goes missing, and the other a beat cop, Mickey, who discovers a link between the addicts and a string of murders in her district. But it’s the honest portraits of a family torn apart by addiction, in one form or another, that sets the novel apart from most in its ilk.

Early on, Mickey relates what it’s like to see her Philadelphia neighborhood racked by the opioid epidemic: “This was the secret I learned that day: None of them want to be saved. They all want to sink backward toward the earth again, to be swallowed by the ground, to keep sleeping.”

Some of the most powerful scenes occur when Mickey, the narrator, strikes a contrast between the present and the past and how her neighborhood has changed: the people, storefronts, faces, attitudes, and, ultimately, her relationship with her younger sister, Kacey.

But Moore doesn’t use the usual good-to-bad trajectory. Instead, she offers us a realistic portrayal of how a family’s struggles in the past affect that same family, in different ways, in the present. Running throughout the novel is the theme of addiction, not just the overt issue of one character’s dependence on drugs, but how an equal dependence on family, loyalty and love plays a role in changing the lives of everyone.

Not all is forgiven, which is what elevates this novel above the cliched detective story. Moore uses place, character and time in masterful unison to create a real-life portrait of a family edging towards acceptance of what life is like now, when not everything has fallen apart.

Spanning three generations and nearly a hundred years, Michael Cunningham captures the lives of the Stassos family, made distinct not just by its troubles, but also its joys, dreams, minor triumphs, pain, desires and suffering.

Told through beautifully lyrical scenes that essentially define each chaptered year, we witness how the conflicts between lovers, husbands, wives, fathers, mothers and siblings produce love and strife in equal measure.

Attachment to place, how it changes over time and the deep, personal memories brought forth by the senses, bring each character back to their essence, their connection to the earth, an absolute innocence.

Early on, we see the patriarch of the family as a boy, working a miniature garden by stealing good soil from a neighboring farm and holding it in his mouth and bringing it to his garden in order to grow meager peppers and tomatoes for his family.

“The soil had a heady, fecal taste; a darkness on his tongue that was at once revolting and strangely, dangerously delicious.”

One of my greatest joys in life is looking through the fiction shelves in a used bookstore and coming across an author I’ve never read, or perhaps never heard of before.

When I first moved to Richmond, I’d visit Chop Suey twice a month and do just that, cramped in the narrow aisle at the start of the A section before a renovation, and working my way through to the Z’s. Not knowing what I was looking for, I studied the titles and grabbed the ones that stood out, which is how I came across the relatively obscure Canadian author, Alistair MacLeod, and his heartbreaking novel, “No Great Mischief”.

Centered around two brothers who look after each other at different points in their lives, MacLeod’s novel uses the stark backdrop of Cape Breton and an historical subplot of exiles from the highlands of Scotland, to trace the lives of his characters from young to old, as the narrator works for his older brother in the mines one summer, while, many years later, caring for him as he succumbs to alcoholism and certain death.

Though the story may sound bleak, MacLeod is a master of using the present tense to make even the slightest gesture a revelation. As his dying brother sees the narrator off one night, MacLeod writes:

“We lean into one another like two tired boxers in the middle of the ring. Each giving and seeking the support of the other.”