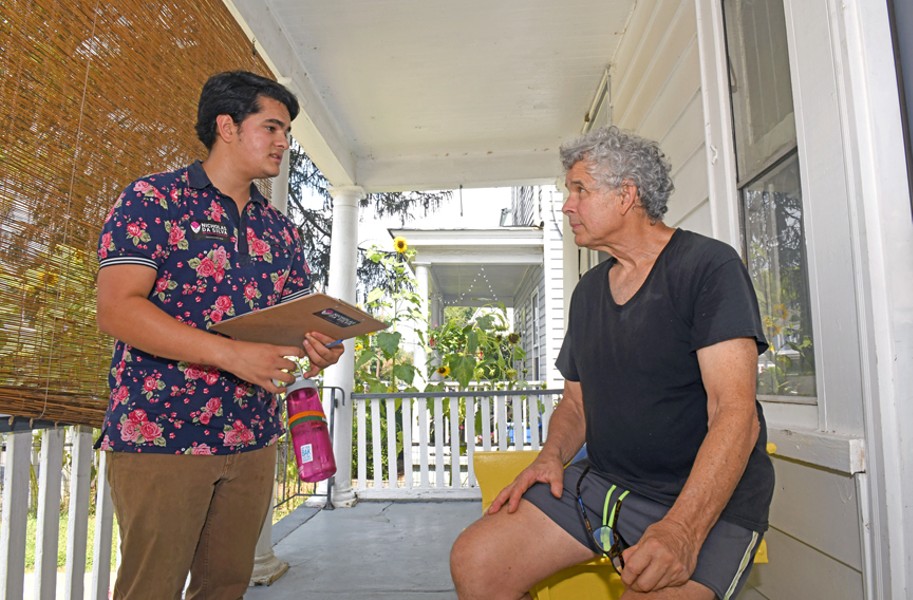 It was on the streets of Charlottesville on Aug. 12, 2017, that 5th District council candidate Nicholas Da Silva had his political awakening.

"You don't end up at A12 not being politically involved, but that was a clarifying moment," he says, using a colloquial term for the events of that day. As the carnage erupted, it wasn't the Democratic Party supporting the anti-racist protest against the Unite the Right rally, he says, but leftist groups such as the Democratic Socialists of America and the International Workers of the World.

Da Silva recalls marching through the city making sure people were OK, when his group got word that the white supremacists had mostly dispersed. They crested a hill and joined another group of counterprotesters.

"It felt great. We were marching up the street together and then the car just came out of nowhere. I remember the screeching of the tires, the horrible sound of the metal," he collects himself, reliving the trauma. "Then, holy shit, I'm sorry but I saw it, they killed that woman."

Da Silva, a recent Virginia Commonwealth University graduate who majored in political science, is 21 and works as an Uber Eats driver. Following the murder of Heather Heyer, he had his first experience of mutual aid, or people working together to collective benefit. It's a leftist alternative to charity, which many socialists see as a patronizing neoliberal practice, and it forms the core of his candidacy and organizing. He's put the theory into practice as chairman of VCU's Young Democratic Socialists of America, organizing a free brake lights clinic, a movement within the party to prevent police contact by fixing broken taillights, with local activist Ulysses Carter. And he hopes to bring that spirit to city government.

If Charlottesville brought him to the Democratic Socialists and leftism, it was the police shooting death of high school teacher Marcus-David Peters in May 2018 that motivated Da Silva to run. He draws a line from Unite the Right to Peters.

Da Silva had already been attending Richmond City Council meetings, and his sense that city officials were ineffective and disengaged only grew after Peters' death. He was stunned by the silence from people in power.

"All these people, who presumably have opinions, aren't talking," he says. "I decided to run for office so I can talk about these things. Someone has to. How else can progress be made?"

Police accountability forms one of the five pillars of Da Silva's platform, which he says was derived from community conversations he's had over the last two years. The other priorities are housing and tenant empowerment, funding for public schools, food and transportation justice and economic empowerment. It's a platform that resembles those of other Democratic Socialists such as Sen. Bernie Sanders, Rep. Alexandria Ocasio-Cortez and, closer to home, Delegate Lee Carter, for whom Da Silva interned after seeing opposition flyers about the then-candidate.

"It was like, socialism evil, bad! I saw that and thought, I have to check this guy out," he says, laughing. In the General Assembly, he saw public corruption and revenge politics first-hand.

"They didn't like [Carter]," he says, noting that Democrats and Republicans alike killed his bills with no discussion in committee. "Even a bill against hitting people in a crosswalk."

Like Ocasio-Cortez and Carter, Da Silva is active on social media, live-tweeting council meetings and engaging with residents. Between his policies and his presence, he's even picked up endorsements from figures like Stafford NAACP President Joshua Cole, the Democratic candidate for Virginia's 28th House District.

Asked if his age has been a hindrance, he says it hasn't.

"If it comes up, it's at the end of a genuine conversation," he says, mostly with a sense of surprise that someone his age is so involved. Da Silva tends to see the positive in everything, and even finds an upside here. "Most members have other jobs," he says, noting the pressures of mortgages, children and careers. "But if I'm elected, I'm going to do this full time. I have four roommates. I can live on $25,000 a year."

On a recent South Side canvas, Da Silva's age only comes up twice, when potential voters describe him as a "fresh voice." In a stylish floral Hawaiian shirt, the candidate fields serious questions and concerns as varied as his ability to represent a district split by the James River, petty theft, potholes and the proposed $1.5 billion Navy Hill development and coliseum.

It's at the door of a retired sculptor, though, that Da Silva finds the type of conversation that makes or breaks a City Council member: A detailed discussion on the flood plan for Reedy Creek, which flows into Dunston Street.

"I don't know if this is the stuff you're interested in. Are you sorry you knocked yet?"

"No, I like this," Da Silva says. "I was just telling my friends, one of the best parts of this is I have an excuse to knock on everyone's doors and meet thousands of my neighbors. It's a treat."

After the half-hour conversation, Da Silva gives him some campaign literature.

"If there's anything else, anything at all, reach out to us, we'll get back to you."