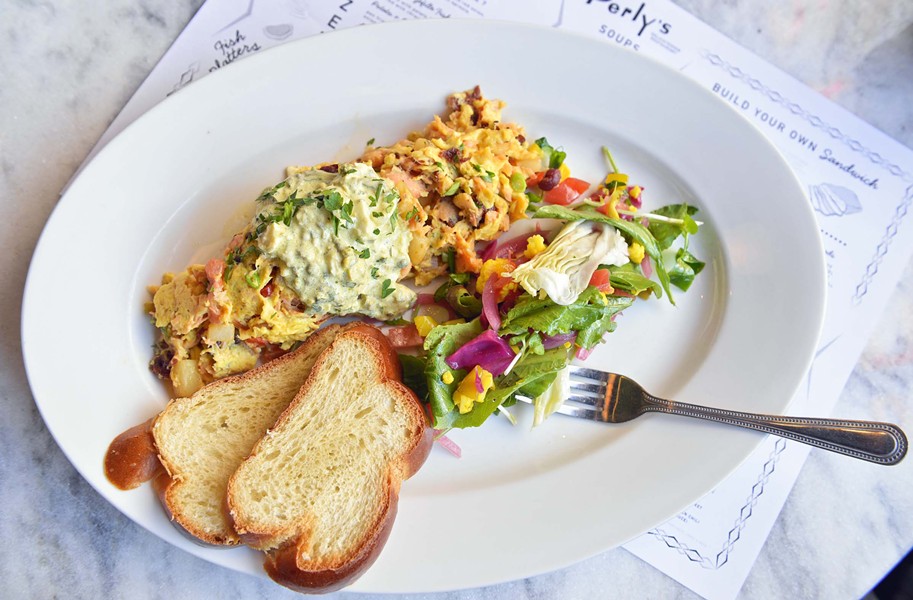 Ash Daniel Kippered salmon and beef bacon are scrambled together to make the Fillmore Fry at the new Perly’s.

Under Gray Wyatt’s ownership, and even before that, when original owners Harry and Mary Perlstein opened the place in 1961, Perly’s evolved into a Richmond institution. Politicians, city workers and businesspeople mingled in the downtown diner, along with down-and-outers who were always welcome to a free cup of coffee. Few places in Richmond managed to appeal to such diverse clientele as the old Perly’s did. And the demise of its 53-year run last year brought citywide mourning.

It was both a genius and a risky move when Johnny Giavos and real estate developer Scott Coleman bought the building. The Black Sheep’s Kevin Roberts took over the name and business, resurrecting Perly’s mostly forgotten origins as a Jewish deli. It was brilliant to keep a Richmond landmark alive. But in a city that doesn’t always appreciate change, it was tricky to alter the diner formula that kept Perly’s a breakfast and lunch staple for years.

The interior is updated, but you still know where you are — now named Perly’s Restaurant & Delicatessen — when you walk through the door. The art deco booths remain, but trendy subway tile now lines the back wall behind the updated bar.

Roberts emphasizes quality and creativity through his food, while honoring the Perlstein’s Jewish food heritage. He succeeds wildly, with worthy takes on classics such as latkes, knishes, rugelach and kugels. Although the kitchen doesn’t keep kosher, which would be difficult in its small space, there’s no pork on the menu — at least a nod to Jewish dietary laws.

Nonetheless, the first visit to Perly’s is likely to overwhelm. The menu is large and peppered with Yiddish and too many customizable options. Take the sandwiches: Not only are there nine meats, six cheeses and five breads from which to choose, you also can add as many as 20 toppings if you want to “make it ferpitzed (fancy),” or add a schmear of chicken liver, a fried egg, turkey or beef bacon. It’s paralyzing.

Fortunately, most of the staff can competently guide you through the options and avoid disastrous flavor combinations. I recommend anything with the heavily peppered house-cured pastrami ($7.25/$12.50), which contends for the best in town. The beef tongue ($8/$14) is meltingly tender and heavenly when paired with the blue cambozola ($1.50) and skhug, Perly’s green chili hot sauce.

For those who don’t want to choose their own sandwich adventure, pricier specialty sandwiches range from classics such as the Reuben ($12) or cheeky options like the goy vey ($12), turkey and beef bacon on challah.

Squeezing into a seat at the crowded bar is common at lunchtime, with evenings less popular. But a few dinner entrées make a nighttime visit worthwhile. I wager that Perly’s is the only restaurant in town offering cholent ($15), a long-simmering beef and barley stew. Orthodox Judaism prohibits cooking on the Sabbath, and traditionally the stew ingredients are combined the night before and left to simmer until lunch the next day, the flavors perfectly melded.

Other options include wienerschnitzel ($17), made with veal instead of pork, or the intriguing pastrami-seasoned salmon ($16), a beautifully moist and generous portion of fish with a peppery crust, served atop zucchini latkes.

Only little things bother me: Someone’s hand is too heavy with sweet flavors in the cabbage rolls ($8), and the molasses-glazed Brussels sprouts side dish, despite the savory main ingredients, feels more like dessert on my palate.

I miss the old Perly’s the most when I see the new restaurant’s breakfast options. Replacing diner classics that used to include plates of eggs, grits and biscuits are bagels, smoked fish and blintzes. It’s clearly a culinary upgrade, but the simplicity is gone.

Nevertheless, excellent options abound. Try the Fillmore fry ($13). Eggs are scrambled with smoky kippered salmon and beef bacon, mixed with tomatoes and potatoes, and topped with a tangy gribiche sauce.

If your taste veers sweet, don’t miss the cinnamon babka French toast ($9) served with a banana rum crème anglaise. There are classics to be had — you can piece together sides of eggs and bacon or try the fresh-from-New-York bagels with cream cheese ($3.50). Pair those standards with a bottomless cup of Blanchard’s locally roasted coffee and the spirit of the old Perly’s still can be felt.

Whatever your opinion about the restaurant’s menu changes, there’s no arguing about the consistently high quality of food churned out of the updated kitchen. My quibbles are minor. Perly’s has reclaimed its place as a downtown gathering spot for a diverse cross-section of Richmond diners who want to discuss business or life while enjoying good service and great food. S