HBO tackles a neglected genre in its newest series. 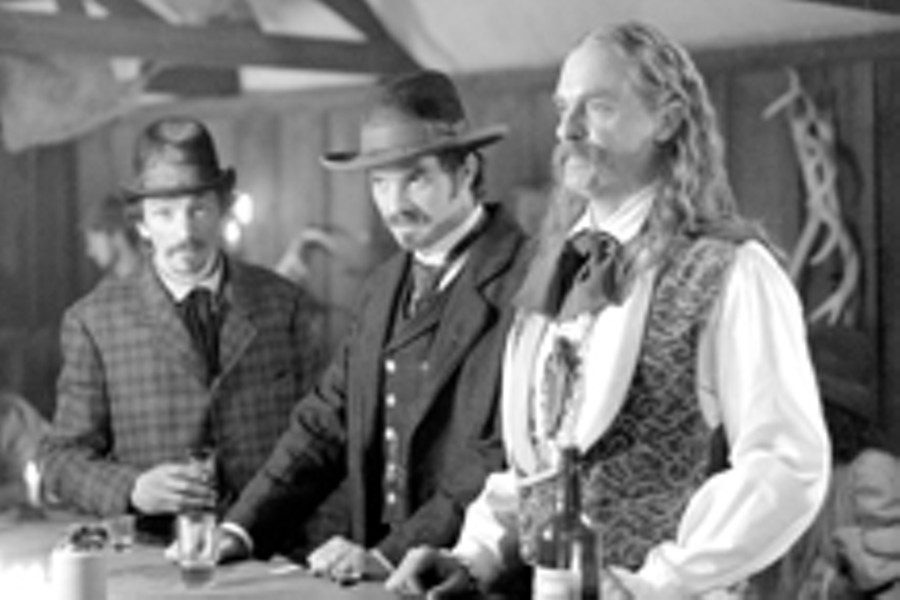 “Deadwood,” the 12-episode series debuting on HBO, capitalizes on the freedom that pay-TV offers to create a Deadwood convincingly close to the original. There’s a gracious plenty of appalling violence and an abundance of frontier sex. People die in shocking ways for trivial reasons, and sometimes their corpses are thrown to the pigs. Most of the words that George Carlin used to say absolutely couldn’t be used on TV are on the pages of “Deadwood” scripts. Given the setting, the effect is believable — it was a rude, crude and masculine world — and the dialogue rings with the clarity of what sounds like authenticity. Is it authentic? Who cares? It’s rip-snorting good entertainment.

An extensive ensemble brings the story grippingly to life. Timothy Olyphant is probably the closest to what passes for a white hat in Deadwood. He plays a former marshal who wants to start a hardware business. Ian McShane exemplifies the other side of the coin as Al Swearengen, the corrupt owner of the Gem, a saloon-brothel soon to be fiercely challenged by what will pass for up-market competition.

Keith Carradine shows up in the first four episodes provided to TV writers as a Wild Bill Hickok who has problems with moral relativity. But the juiciest performance comes from Robin Weigert as a dirty-faced, foul-mouthed and full-grown but oddly na‹ve Calamity Jane. Weigert’s Jane combines a 10-year-old’s sophistication (and loyalty to Hickok) with a Wild West vocabulary.

David Milch, the creative force behind “Deadwood,” brings the talent he honed on “Hill Street Blues” and “NYPD Blue” to a genre that has been neglected recently on TV. And Milch’s West is rough and wooly, ready and wild — as fictionally close to the real Wild West as his previous efforts were to real police work. With Milch at the helm, viewers don’t really care if the story is real as long as it appears honest. And “Deadwood” does.

The camp at Deadwood isn’t like the westerns TV used to serve up, no more so than “The Sopranos” is like the old “Untouchables” series. The streets are ankle deep in mud, personal hygiene is abysmal, overcrowding and lawlessness reign, the stupid are ruled by the barely intelligent, naivete is a deadly disadvantage, morality is defined minute by minute, and evil flourishes because nobody tries to stop it. Milch throws in full frontal male and female nudity when the occasion presents itself, just to make sure we’re paying attention.

If there’s a problem with “Deadwood” it lies in the scope of the story and the size of the ensemble. Milch seems determined to introduce us to everybody who lives in the camp in the first episode, and new characters appear left and right until the viewer grows weary of distinguishing them. Only the oddest stand out at first – Hickok and Jane, for example. And snatches of plots and subplots that won’t become clear for several episodes are scattered like seeds in a breeze. “Deadwood” is not a series layered by the individuality of its characters, but by the character of the ensemble — the camp — itself.

Stick with it, though. As the second episode unfolds, you’ll have the eccentric assembly sorted out and the complex stories will begin to gel. By then, you’ll be sorry to remember that Milch only has 12 episodes on the boards. S