The New Joaquin Phoenix Movie, “You Were Never Really Here,” Digs Beneath the Surface of A Violent Revenge Fantasy 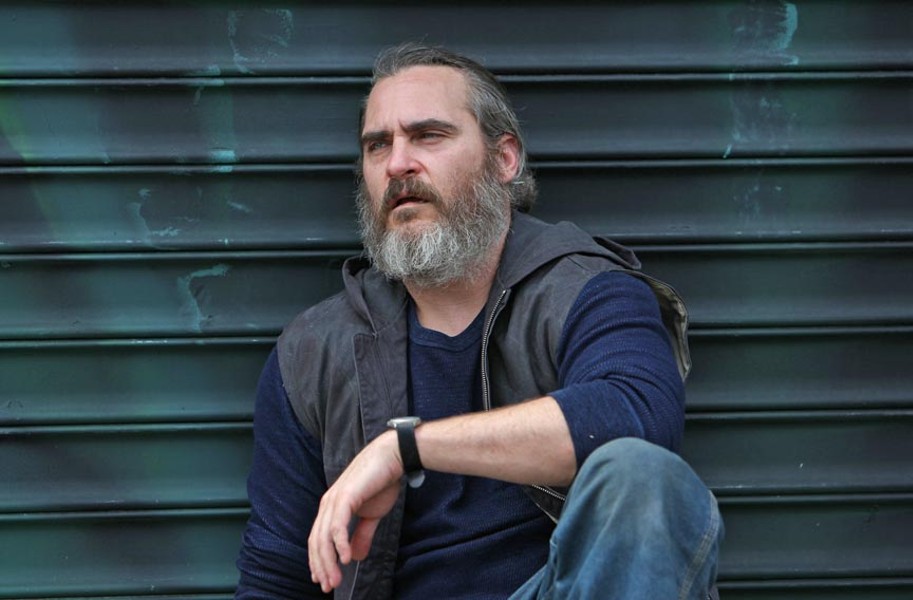 Looking his burliest, Joaquin Phoenix plays a contract killer who uses a ball-peen hammer to take out pedophile rings in “You Were Never Really Here” by Scottish filmmaker Lynne Ramsay (“We Need to Talk About Kevin”).

"You Were Never Really Here" looks at first glance like a violent fantasy: A story about a killer for hire made unusual, or maybe just more campy, because the killing tool of choice is a solid-steel ball-peen hammer.

The reality is a little different. The film follows war veteran Joe (Joaquin Phoenix at his most scruffy and stocky) doing unusual night duty as hired muscle to track down lost kids as he deals with traumas from his own past, including his childhood, that appear to have culminated in severe post-traumatic stress disorder and a career putting an end to child abusers.

The hammer in this context becomes not a theatrical embellishment, but a symbol, the simple tool for a dead-inside guy for whom violence has become second nature. Joe doesn't bother finding a special hammer. He casually picks up whatever is on the shelf at the local hardware store. Any sturdy handle with a solid, skull-crushing load will do.

Joe finds these freelance gigs through a handler (John Doman), hired by worried parents, usually wealthy, whose kids have either run away, been abducted or something in between.

"You Were Never Really Here" is unusual from the start. The first time we see Joe on such a case, he comports himself with the casual demeanor of a pest control technician. "I'm just here about the roaches," wouldn't be surprising to hear him say as he enters a Manhattan townhouse functioning as a child brothel, before exterminating the human bugs running it. Things could and probably will get messy, but Joe doesn't appear concerned.

But before you race off to the nearest movie theater to watch Joe play hammer time on gross child molesters: "You Were Never Really Here" is not "Death Wish" with a hammer. While it has genre elements, and we do see Joe at work, moments of on-screen violence are surprisingly scarce and fleeting. There's more beneath the surface, and beneath the surface is where "You Were Never Really Here" really wants to go.

An interwoven narrative deals, in flashback, with numerous sorrows skulking in Joe's mind as he cares for his elderly mother (Judith Roberts). Something happened to him during the war, something that compounded an extremely abusive childhood, whose memories remain raw and out of control.

Scottish filmmaker Lynne Ramsay ("We Need to Talk about Kevin") adapted the movie from an equally fast-paced book by Jonathan Ames. Lynne proves a perfect intermediary for it, with her ability to turn mere seconds of footage into powerful suggestions about her characters and their back stories.

This loose, enigmatic quality also means this is not as instantly gratifying as a straight vigilante film. Ramsey is a frugal storyteller. Sometimes we witness Joe's work firsthand, other times we see only the aftermath. Shot choices are often suggestive rather than explicit. Usually — and maybe a little disappointingly — hammer time is always just a bit out of frame, or within too few of them, to provide a full-throttle vicarious thrill.

Leaving violence off-screen often augments its power. But here the technique has the opposite effect, deadening moments of fierce tension. Joe is just going through the motions, and we feel that as a result of what Ramsay chooses to show.

Audiences expecting neat structures and clever resolutions might also disappointed. Clocking in at a brisk 95 minutes, "You Were Never Really Here" paints Joe impressionistically. Questions linger. How is he able to conduct full-scale search and rescue missions armed only with duct tape and a hammer? And without fear? Has he merely gone so numb as not to care? Or does he have a full-blown death wish?
The movie frustratingly, though probably intentionally, leaves it up to us to figure it out. I thought I caught a whiff of commentary about the tenor and mental stability of contemporary society. Or did the film open itself to my preconceptions and anxieties? It's difficult to say more than Joe helps kids because no one helped him.

The plot feels a little hurried and bumpy at times, and the climactic scene, which concludes the surface-level action, is not merely unsatisfying, it's implausible. Some of the minor characters, even supposedly important ones like a governor played by Alessandro Nivola, seem like they are never really there. Perhaps it's a matter of perspective. Joe doesn't live in the real world, not mentally at least. But his work and his damaged point of view feel part of it. (R) 95 min. S