Richmond women make inroads into the male-dominated world of woodworking. 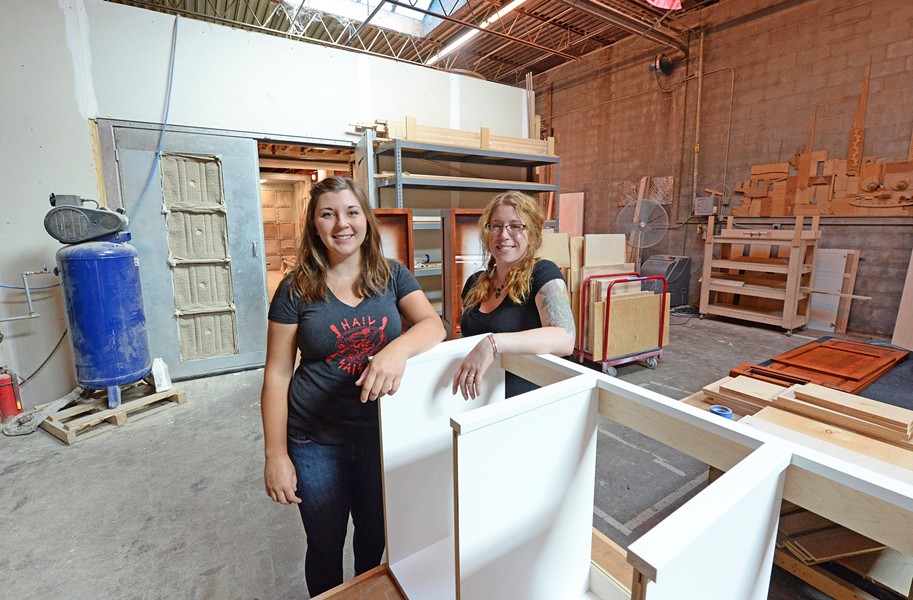 Scott Elmquist Michelle Anthony and Laura Casey have not felt any different at Martin Star Cabinetry and Design on West Main Street, though having two women woodworkers in the shop is an industry rarity.

Michelle Anthony is fixing two panels of oak into a right angle in the back room of Martin Star Cabinetry and Design on West Main Street. An industrial fan circulates hot air and nearly invisible wood particles like a reverse vacuum, but she’s steadily engaged with intent precision. She’s one of two women woodworkers in the crew of about 15.

It’s something she’s been moving toward since college.

“It was difficult when I was deciding a major,” Anthony says. “I just liked making things.” She eventually whittled her interest down to 3-D art, before somewhat accidentally taking a woodworking class her freshman year at the University of the Arts in Philadelphia. It was one of two electives still available.

“I’d never worked with wood before,” Anthony says, “And I loved it.”

She pursued a dual major — jewelry-making and woodworking — until she had to make a choice to complete her degree. She recalls lying in bed at home, trying to figure out her future, when she had an idea. The next morning she sketched it out on paper.

“It was a piece of furniture,” she says. “I remember walking into both studios, with the coldness of the metal shop versus the warm wood of the woodshop.”

After graduating with her degree in woodworking, Anthony had a few offers for internships in the field, but none paid. She wound up moving back to Richmond, where she grew up, worked in retail for three years, and spent six months with her family’s company, which makes and installs gutters.

The opportunity to work at Martin Star came along at just the right time, she says.

“I’m not sure I was immediately ready for this atmosphere right out of the gate,” she says. “It took a while. I had to work for it.” When Anthony finally got in touch with the people at Martin Star, they said she could stop by anytime. She did the next day.

“It was pretty obvious there were no women that worked there,” she says. “That it would be a dynamic change.” But she wasn’t intimidated, she says: “I told him: ‘I just want to be back in the shop. I just want to make things. I want to work with my hands.’”

Despite having no experience building cabinets, she was invited to join the team in June 2014. “They were all walking on eggshells around me,” she says. “They were very nice, but it took most of the guys about a month before they got comfortable.”

She started off sanding. Depending on the flow of the shop, she was placed, as needed, on other tasks, like the rest of the shop workers.

“Michelle was the first female to work here, so I think it opened everybody’s eyes — that it’s not just who can lift the most weight,” says Ricky Hoskin, head of finishing. “To have one woman in the shop is rare, but to have two is very rare.”

Another female woodworker, Laura Casey, joined the team in March. She estimates that 95 percent of the industry is male dominated, based on her work in nine shops during the last 11 years. Unlike Anthony, Casey got into woodworking outside of school.

“I mean, I’m a high-school dropout,” she says, having earned her GED while taking shop classes. “I’m a terrible student. I’ve dropped out of most things in life, except woodworking. I stuck with that.”

When Casey applied for a job at Martin Star, the rest of the male crew turned to Anthony and asked how she’d feel about it. “One of the guys said, ‘Oh, there’s gonna be competition,’” Anthony recalls. “I said: ‘What competition? This is gonna be awesome.’”

The two became fast friends and agree that having the other around has built their confidence. “We’re never made to feel like we’re women in the wood shop,” Casey says.

Nathan Gomez, one of Anthony’s co-workers, hasn’t come across too many women in woodworking in his nearly seven years in the business.

“I’ve never seen a woodshop like this,” Gomez says. “We’re pretty tight-knit, progressively minded, and committed to the quality of the product. Everybody here knows what they’re doing, and that’s pretty awesome.”

And all of that seems to trump gender, he says: “I don’t know that ‘women to men’ is really an issue at all.”

Although she is happy to be back in the woodshop, Anthony recalls her work in college where she made what she calls seating devices to change people’s perception of furniture. “I want to make my own furniture,” she says of her plans. “Art furniture. Something that’s sculptural, that makes you think.” S