Richmond Police Chief Alfred Durham helped develop the city’s community-policing model a decade ago. Now he’s at the helm of the department with the goal of keeping the neighborhood connection strong. 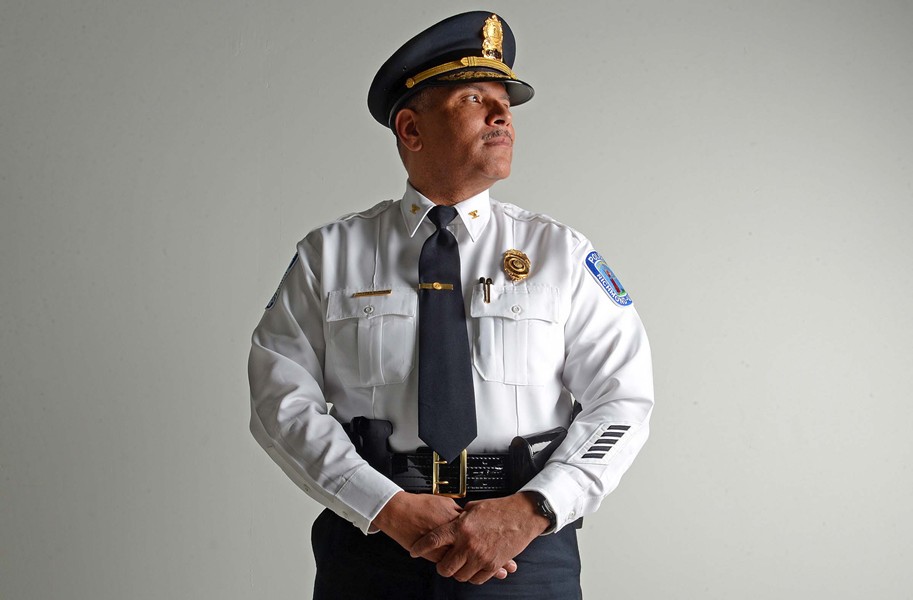 Scott Elmquist Richmond Police Chief Alfred Durham was officially sworn in Friday, but took command of the Police Department the previous weekend. The 51-year-old brings experience from time in Washington and Richmond.

Uniformed officers mill around the command room on the second floor of the city’s police headquarters. The setting is like what you’d see in a crime drama — a small auditorium with a podium in the front facing four long rows of desks. Majors in crisp white shirts dot the room.

They’re about to begin the department’s twice-monthly focus meeting, where top officers receive reports and statistics on crime from across the city.

The room quiets when the city’s new police chief, Alfred Durham, takes to the podium for the first time in his new role.

“Wow,” he says, as if briefly stunned by his rise.

Durham, 51, began his career working undercover in the housing projects of Washington. He steadily worked his way up the ranks through the city’s Metropolitan Police Department before coming to Richmond for a stint in 2005 and returning last November.

Any awe on Durham’s part is short-lived. He launches into a series of award presentations, delivered rapid-fire to members of the department who’ve stood out in one way or another during the past several weeks. On this day, that includes Kecia Hunt, the communications officer who handled the call when 1st Precinct officer William Turner was shot while responding to a call in early January.

Soon the meeting shifts to its primary purpose: grilling Durham’s new team on its stats.

The city is divided into 12 sectors, which serve as small police departments, each helmed by a lieutenant. Each one takes turns behind the podium, presenting work from the previous two weeks and comparing the numbers to previous results and goals that were set going into the period.

This is the model of community policing that former chief Rodney Monroe brought to Richmond in 2005, when the city was reeling from almost 100 homicides a year.

It’s also the system that Durham helped establish as one of Monroe’s first hires.

The reports to the command staff are detailed. Lt. Jeremy Sayles describes all three robberies that took place in his sector, 111, which covers the far East End.

For the most part, Durham quietly follows along in the back of the room. He and his majors shout the occasional question: Are these goals aggressive enough? What were people saying at the community meetings you attended last week? Do you have any idea what led to the increase in car thefts?

Durham turns to a reporter he’s invited to sit in on the meeting. “It’s my job to drive crime down and make sure we’re maintaining connections with the community,” he says. “This is one of my primary tools to make sure we’re doing that.” 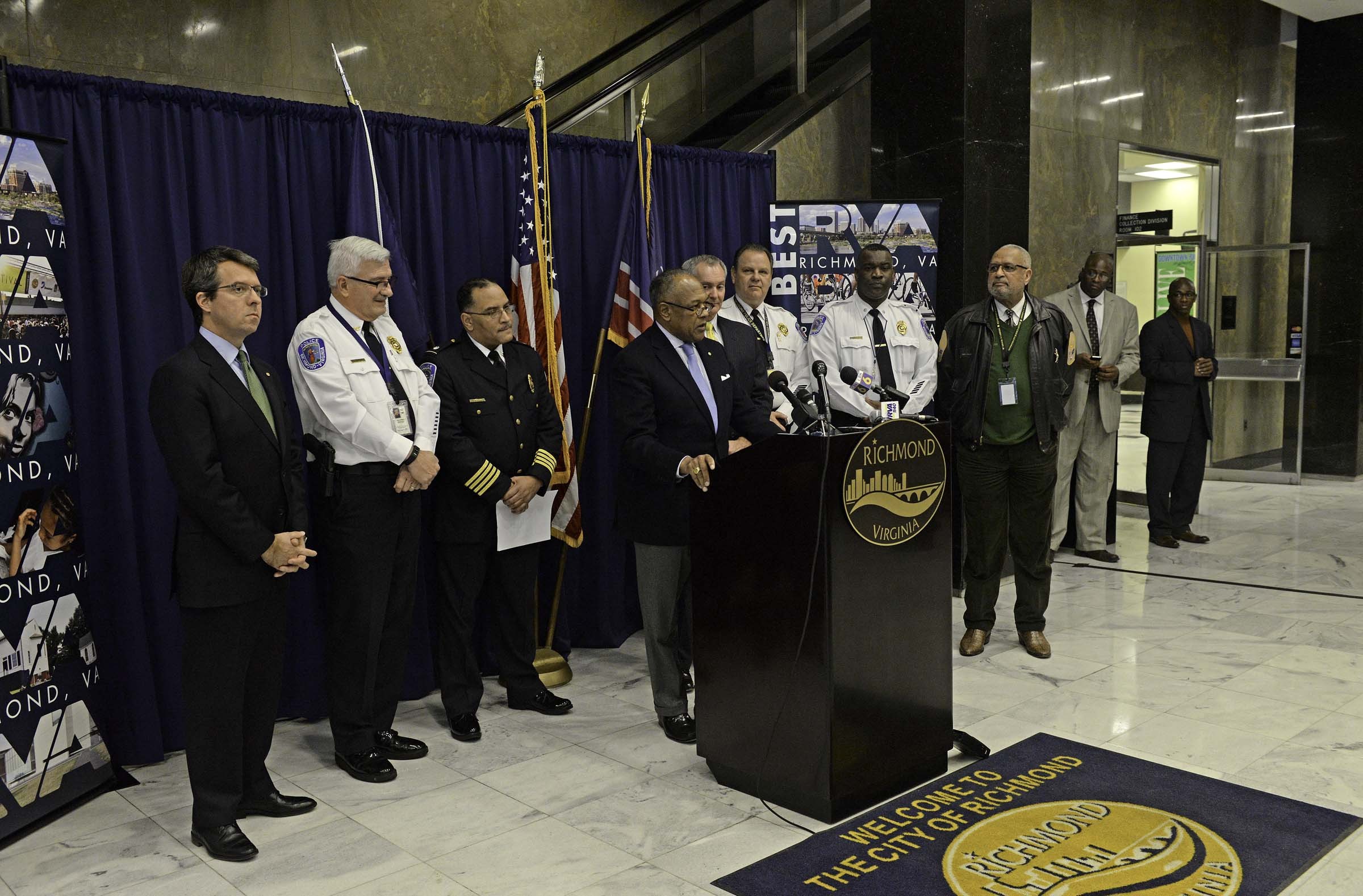 When Mayor Dwight Jones introduced Durham as his choice to be the city’s top officer two weeks ago, he made it clear that he wasn’t looking for radical change in the department, which has seen a steady decline in violent and property crimes during the past 10 years.

Jones attributes that drop to two things: community policing and Rodney Monroe, who served as chief from 2005 to 2007 and implemented the strategy during the city’s high murder rate years.

Durham, like his immediate predecessor, Ray Tarasovic, was one of Monroe’s co-workers and protégés from the Metropolitan Police Department in Washington and later in Richmond.

“He was part of the team that began community policing over 10 years ago,” Jones says, crediting the approach to helping the city avoid the kind of unrest that’s gripped Ferguson, Missouri.

Community policing as established by Monroe divides the city into sectors so police can get to know a neighborhood and its residents. It also allows police to focus on the specific needs and crimes that each neighborhood faces. The South Side has different problems than the West End.

The idea is that officers assigned to each sector become accountable to residents by not only being in the community day in and day out, but also attending community meetings and participating in neighborhood events.

When Durham arrived in Richmond, he says the city’s Police Department had a different approach and a bad reputation.

“I don’t want to badmouth the chief then,” Durham says, “but it was different. There was no connection to the community. It was just going in and locking folks up. You go in, you lock them up and you leave. And it was going from radio run to radio run. It wasn’t active, it was reactive.”

“We had a lot of police shootings, and the easy answer is to just blame the public, but it’s never an acceptable answer,” Hicks says. “The truth is that we had years before when the city was a far more dangerous place, and fewer officer-related shootings.”

The Richmond Police Department still has its critics. In recent months protesters with Black Lives Matter have taken to city streets and raised grievances with the way the department treats black residents.

At a recent City Council meeting, Leonard McMillian, a retired factory worker, outlined a series of unfortunate interactions with the department, including being detained in his house for what turned out to be a false report. A front-page story on his encounter ran in the Richmond Free Press last week with a one-word headline: “Wronged.”

The Police Department has just as many vocal supporters. Fattah Muhammad appeared at the next City Council meeting to detail his admiration for the department.

“I’m proud to be living in Richmond,” Muhammad says. “I’d move, but I’m afraid to move because of what I might face in other cities. I know when I go out on the street someone’s got my back, which is the Police Department.”