A 16-year-old Chesterfield boy is turning heads in Hollywood. 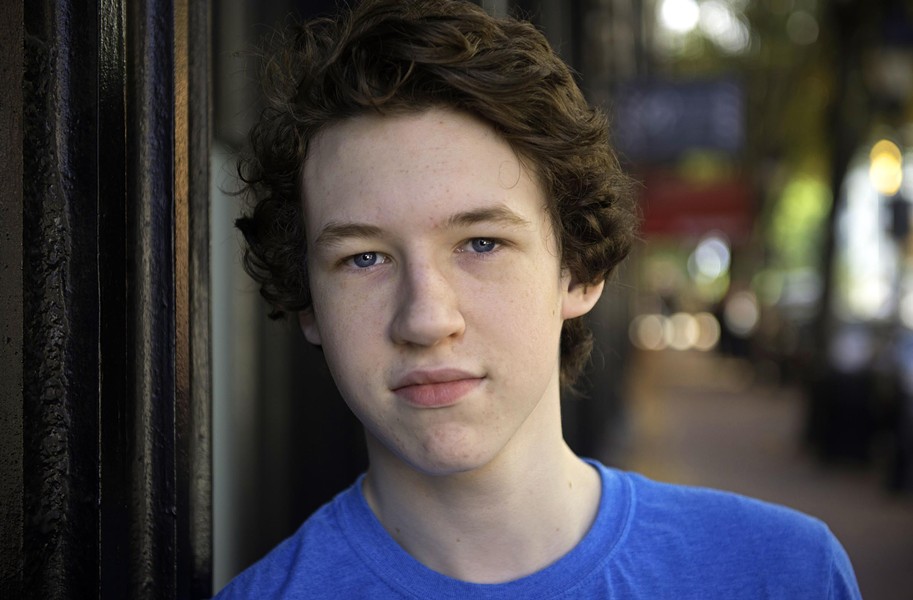 Scott Elmquist Among his projects, actor Devin Druid is featured in the acclaimed new HBO miniseries, “Olive Kitteridge,” based on the Pulitzer Prize-winning novel by Elizabeth Strout.

Hell hath no fury like a bitch slap from Frances McDormand. A Chesterfield County teenager found out the hard way.

Devin Druid plays McDormand's son, Christopher, in the acclaimed four-hour miniseries "Olive Kitteridge," airing on HBO. In an early scene, Druid's character calls a friend "trash" and McDormand lets him have it across the face.

"She was actually slapping me each time," Druid says, noting the scene had to be shot repeatedly in different ways over two days last October. "Frances wanted to do it one way, director [Lisa Cholodenko] wanted it the other way — so I don't remember how many times I got slapped. My mom says I popped a blood vessel."

But the smacks were no big deal. Druid's dealt with worse because of a rare genetic connective tissue disorder called Ehlers-Danlos syndrome. His bones tend to dislocate often, almost as easily as the acting prodigy shifts between characters.

"We live with chronic pain. The kids have to get regular echo-cardiograms and screenings," says his mother, Christine, of Druid and his four siblings — the youngest brother, 11, also is pursuing an acting career. "Devin will wake up with dislocated fingers or ribs. ... We just made a decision a long time ago to make whatever changes were necessary to accommodate — but also to live our lives to the fullest."

As an actor, Druid is known for carrying two episodes of the acclaimed FX television show, "Louie," in which he played the comedian Louis C.K. as a young man (C.K. unsuccessfully campaigned for him to get an Emmy nod). He also played a Muddy Lion in the locally filmed independent feature, "Troop 491," and worked in some New York University student films.

With the success of "Kitteridge," his career is accelerating.

"His rising-star status has escalated so fast in the last three years," says Heather Waters, president of the Virginia Production Alliance, who worked with Druid on one of her own early documentaries.

"He's a hard worker and a very intuitive listener," Waters says, "which is so rare for a kid. His acting is raw, intense and filled with genuine love, care and respect for people. And he can translate that to a performance that comes from empathy — I think of Meryl Streep."

Druid's wavy brown hair and cool blue eyes bear a striking resemblance to a gawky, young Bob Dylan. He comes across as unerringly polite and mature for his age. Because of his health concerns, he's been home-schooled since the eighth grade. He got his diploma last summer, two years early.

"[My siblings] and I are learning to think for ourselves and be independent — to have our own ideals," Druid says. "It's been a big change from a normal standardized education. For me, I feel like real learning is going out into the world and discovering new things, making mistakes and learning from them."
Druid says his mother turns road trips for auditions and film shoots into field trips to museums, parks and buildings. She also helps him go through scripts and choose the best material. "I call him the male, teenage Tilda Swinton," his mom says. "He wants to do cerebral stuff that is artistically gratifying."

"I've seen the full gamut of stage moms, and Christine has been real with him and taught him how to handle things," Waters says. His mother says Druid's father has been out of the picture since he was much younger.

Druid says he prefers gritty dramatic indie films where he can go in-depth with the character — though he wouldn't turn down a "Walking Dead" part. During his time on "Louie," Druid says he mastered the mannerisms of the famously grumpy comic.

"There was no beating around the bush with him," Druid recalls, adding that as a comic book fan he was thrilled to be choked by a drug dealer played by Jeremy Renner: "I was like, mom! It's Hawkeye!"

"Louis [C.K.] told him to make sure he finished his education," his mother says. "But that he would have a career for as long as he wanted one." 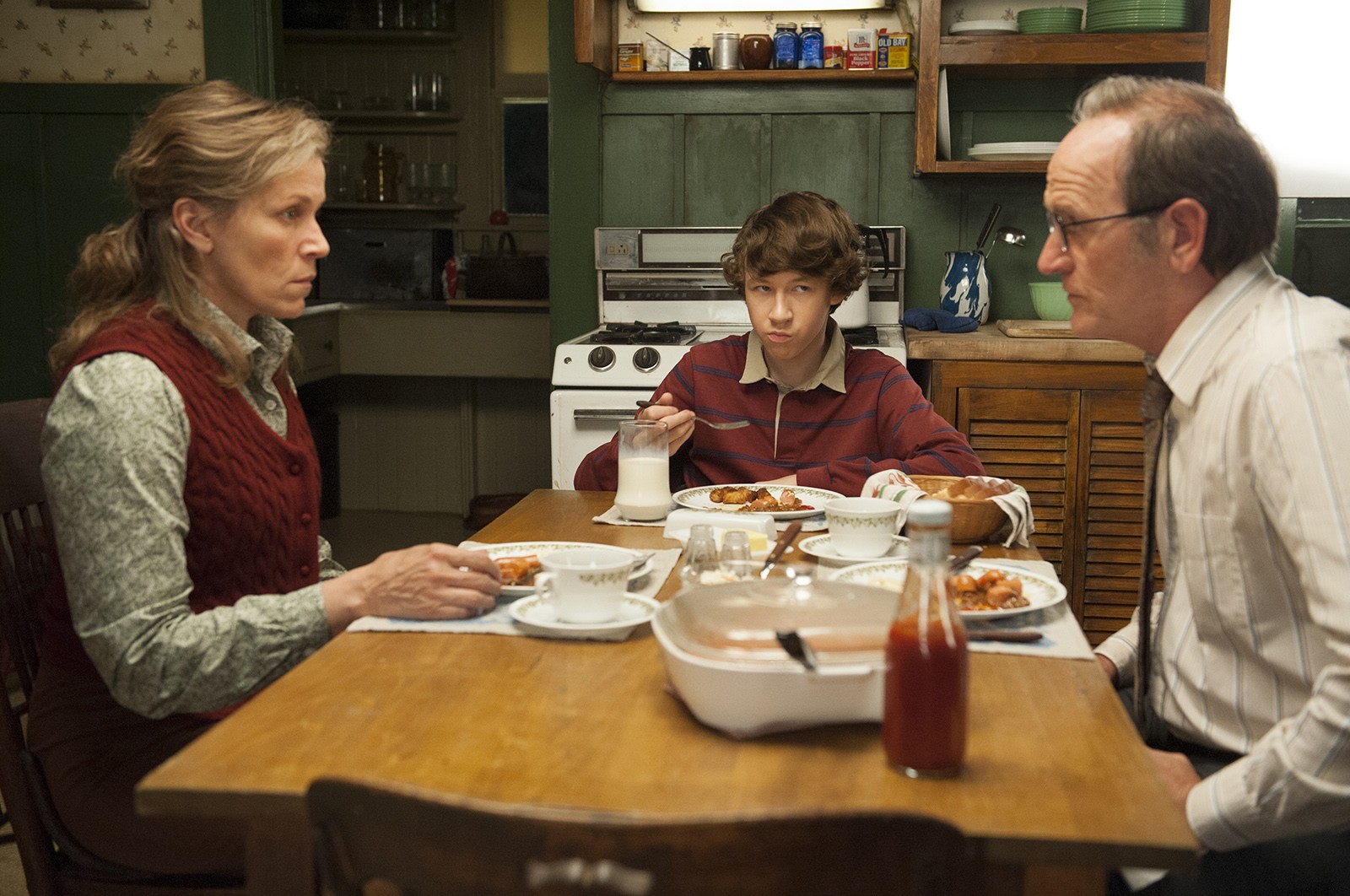 He and his mother just returned from New York, where he was shooting "Louder Than Bombs," a new film by Norwegian filmmaker Joachim Trier, a relative of director Lars Von Trier. The filmmakers hope to be in contention at the next Cannes Film Festival.

"In our film, he works with Gabriel Byrne, Jesse Eisenberg, Isabelle Huppert, Amy Ryan and David Strathairn," the film's producer, Joshua Astrachan, says by email. "Each of those astonishing actors would, I know, speak to you about Devin with the same incredible regard for him that I feel. We collectively could not have been more impressed by Devin or more moved by his work."

Druid has a backup plan to study graphic design, but he may be too busy making films in the coming years. There are two television pilots he can't yet discuss (one involves Steven Spielberg). And his agent recently told him to make sure he and his mother had passports ready for a reoccurring role on an established television program that he can't yet mention.

Druid says he hasn't read the critics on "Kitteridge," ignoring outlets such as the New Yorker ("soaring, inventive") and New York Times ("a rare treasure"), partly because his mom warned him about getting a big head. "I look on Twitter to see how fans react," he says. "A couple people who saw me from 'Louie' tweeted at me. That was really cool having people recognize me. I felt accomplished."

Mostly he spends his free time playing with his cat Nayla, reading comic books and enjoying video games. A few Sundays ago, he watched the HBO premiere of "Olive Kitteridge" at home with family. Surprisingly, he says, it was just how he imagined it would look, which doesn't usually happen.

To celebrate, that night his mother took him to the Westchester Commons Game Stop for the midnight release of "Call of Duty." S