The Most and Least Common Requests at Pleasants Hardware 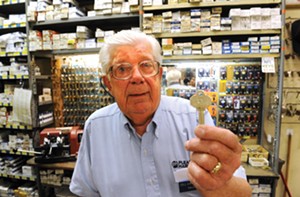 The staff at Pleasants Hardware on West Broad Street is known for being helpful. How does it help most often? By cutting keys. Manager Clay Butler says the store does an average of 4,000 a month, in part because of its stock of difficult-to-find shapes and a reputation for accuracy.

Clerks also field more esoteric requests. The weirdest of the past year? Butler says a slightly inebriated man wandered in one day with a handcuff locked to his wrist. He asked a staffer if they could cut off the cuff. "His story was his girlfriend had handcuffed him to the bed and left," Clay says. Pleasants declined, instead opting to call the police. pleasantshardware.com.