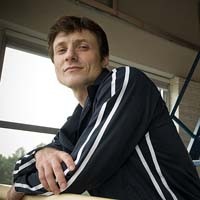 When Richmond Ballet dancer Igor Antonov first learned the title role in the classic 1928 Balanchine ballet, “Apollo,” he had trouble with the part. “I had a difficult time in the beginning,” Antonov recalls.

Dances choreographed by George Balanchine are fiercely protected by the Balanchine Trust, and must be staged according to rigorous guidelines by a trust-approved “repetiteur” or rehearsal director. “Apollo,” which shows the young god of music dancing with and learning from three muses, was staged for Richmond Ballet in 1993 by Richard Tanner. Antonov remembers that Tanner “was very demanding. He really wanted it a certain way and wouldn't let me move it in any other direction. I just remember he kept saying ‘no and no and no,' over and over again.”

Antonov, who now holds the position of resident artist with the Richmond Ballet, came to Richmond from the Ukraine as a principal dancer with the Donetsk Ballet. While the company was performing here in 1990, the artistic director, Stoner Winslett, offered Antonov a guest-artist engagement for one year. He ended up staying for five.

He was attracted by the company's diverse repertoire of classical and contemporary works — much different from the classical standards he was limited to in the post-Soviet Ukraine. “I'm one of those people who have always looked for a company that had a classical base, and on top of that, variety of the repertoire,” Antonov says. “So that you don't dance all year long “Swan Lakes” and “Giselles,” or all year long Jessica Lang and Balanchine. I enjoy all forms. … as long as they're good.”

After a stint with a larger touring company in Germany, Antonov returned to the Richmond Ballet in 2003 as a resident artist, teaching and directing rehearsals in addition to performing. Winslett offered him the job during one of his regular Richmond stopovers (his parents live in town). “Not to take it would not have been smart, I think. The timing was right,” he says. At 41, Antonov is older than most ballet dancers, after all. He began instructing at age 22 and says that he will continue once he finally retires from the stage.

Richmond Ballet's appeal to him was twofold. “Stoner really manages to keep interesting repertoire in the company. For a small company this size … this is a big plus,” he says. “And on top of that, once I started working, the people and the atmosphere around here were very nice. You're in a friendly working atmosphere the whole time. Those are the main factors that kept me here for so long, and the same factors that brought me back.”

Balanchine ballets are known for their fast and brilliant footwork. When Antonov first began learning the master's style, he says, “it was much faster than what I was used to. In that sense it was challenging.” But he found it exhilarating, too. “It is a funny feeling — sometimes you have something challenging to do in terms of steps, and it's not that pleasurable; you just have to do it. But in the case of Balanchine, you really want to do it because you can tell it's going to have a good feeling.”

Looking back over the ballets he has performed in Richmond, Antonov says Apollo is one of his favorite roles. “I just kind of grew into it. Every time, I would feel better and better, and discover different stuff that I could do,” he says. “But that process, inside of me, was very interesting. I think that's why it's a favorite. Because I still now can discover nuances that I'm going to try and throw in and see if the ballet mistress likes it. Every time I do it, I feel like I'm growing with the part.” S