The Mayor Is Meeting With Richmonders. Here's When He'll Be in Your Neighborhood. 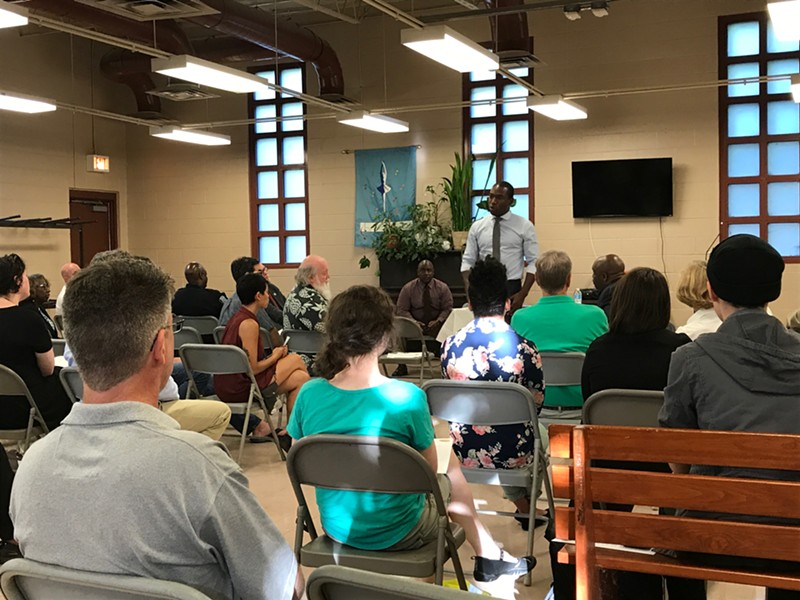 It was ambitious to think this would only take an hour.

Mayor Levar Stoney held the first of his summer office hours on Tuesday night, where topics ranged from schools and public safety to infrastructure and solar panels.

The 6:30 p.m. session at Humphrey Calder Community Center pushed up against 8 p.m., and the mayor and city staff members stuck around afterwards to answer more questions. Of the around 65 people in attendance, nearly 20 were city administrators and elected officials, on hand to offer more detailed reports and plans.

Scott Firestine, the Richmond Public Library director, gave an update on the West End Library renovations and the library’s new mascot. (It’s an otter.) Bobby Vincent of the department of public works answered questions on tree box code enforcement and explained curb bump-outs. Economic and Community Development Director Lee Downey couldn’t get a babysitter, and his kids lingered in the hallways so that he could be there.

First District Councilman Andreas Addison and school board member Liz Doerr helped the mayor defend the education compact, which has rankled some education advocates of late.

“I came for homework,” the mayor said at one point — right before a man stood up and held court for several minutes on various topics. He had handouts, but no questions.

There are eight more chances to squeeze the most face time you can out of the mayor this summer. All are, theoretically, 6:30-7:30 p.m.