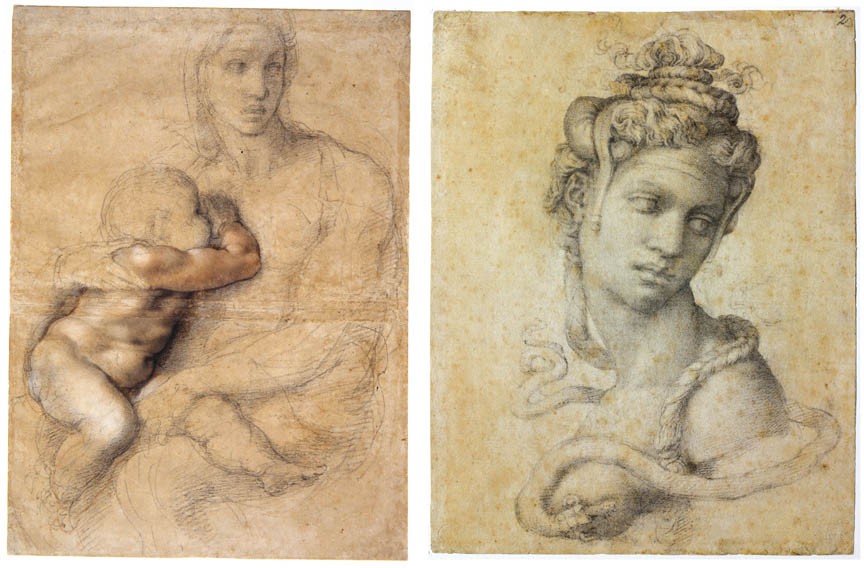 The drawings of Michelangelo Buonarroti almost never travel. So how did they make their way to a small university museum in Virginia?

Drawings are fragile, especially older ones, and can't be exposed to changing light and motion without sustaining damage. Knowing the right people in Italy may have helped secure the astonishing loan that's brought 25 drawings by the Renaissance master to Williamsburg.

They've arrived for the exhibition "Michelangelo: Sacred and Profane; Masterpiece Drawings from the Casa Buonarrotti," on display through April 14 at the Muscarelle Museum of Art at the College of William and Mary, in honor of the museum's 30th anniversary.

The Muscarelle's director, Aaron de Groft, and curator John T. Spike studied and researched the Renaissance extensively at the Casa Buonarroti, Michelangelo's family home. Although the famous artist never lived there, it became a repository for his drawings, letters and other memorabilia, which were bequeathed to a nephew, Michelangelo the Younger.

A few years ago, de Groft orchestrated a loan of Michelangelo's drawings to the Muscarelle, presenting architectural plans in human terms. Certain buildings even mimicked human anatomy. The theme of that 2010 exhibition put forth the notion that man is the measure of all things.

The title of the latest exhibit was suggested by the work "Cleopatra," a two-sided drawing by Michelangelo (1475-1564) on view in the show. The seductive Egyptian queen is serene, composed and dignified, above reproach on the front side of the drawing, despite twisted serpents and braids decorating her neck. Walk around the freestanding case to view her tortured face — she's in extreme anguish on the verso side of the drawing — and you'll feel her despair. Michelangelo focused on images of classical antiquity, Christian Rome and architectural plans, anxious to keep achieving after the glorious success of the Sistine Chapel.

It's also amazing that the Muscarelle has produced a full-blown catalog of the exhibition using the talents of Spike, de Groft and their Italian colleagues. The drawings and comprehensive catalog will travel to the Museum of Fine Arts in Boston from April 21-June 30, one of the great museums of the United States and possibly of the world — truly an honor for the art historians at William and Mary.

The drawings were chosen to contrast the sacred or divine with the profane or worldly. Certainly, Michelangelo's poignant version of a "Madonna and Child" is a glimpse into the rarefied world of the divine. The religious drawing consists of two sheets of paper, attached horizontally in the middle; the two figures are nearly 50 percent life-size. The virgin is an underdrawing, sketched with feathery strokes of black chalk, creating an unfinished look as if preparing a study to be completed later. Christ's sculpturesque, rippling muscles, painted in red chalk, suggest that he is an otherworldly, divine being. Even though nursing him, the mother looks away, perhaps thinking about the future.

Following upon the heels of Michelangelo, 50 years later the Italian baroque artist Mattia Preti (1613-1699) was impressed by his predecessor Caravaggio (1571-1610), known for his fascinating but mysterious use of light upon the human figure. In conjunction with Preti's 400th birthday, the Muscarelle has mounted a dazzling exhibition of 15 large paintings, which also explore the possibilities of light.

This year has been designated the year of Italian culture in the United States. The Michelangelo sculpture "David Apollo" at Washington's National Gallery of Art recently launched the celebration. At least 70 American museums and institutions will highlight the arts of Italy in 2013. This Michelangelo exhibition in Virginia pays fitting tribute to a leader in the pantheon of great artists. S

"Michelangelo: Sacred and Profane; Masterpiece Drawings from the Casa Buonarrotti" is on display at the Muscarelle Museum of Art at the College of William and Mary through April 14. Information at 757-221-2700 or online at wm.edu/muscarelle. Tickets are $15.