The Man Inside the Camera

Because taking pictures is just too easy, Shaun Irving built a camera out of a box truck and traveled around Richmond. Oh, and Spain. 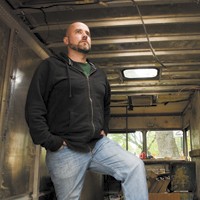 Here's an image that won't fade: an adult man in his front yard, watering a giant photographic negative with his garden hose. That's Shaun Irving. The giant negative came from the giant camera he built into a regular-sized box truck.

The garden hose is one of Irving's primary tools as a photographer — it's how he rinses the chemical bath off his latest work. Another important tool is the orange cone. He must set up his camera truck to take these monstrous pictures, and the process takes a while, and as we all know, orange cones make you look official.

“If you kind of look like you know what you're doing,” he says, “people pretty much leave you alone.”

That's pretty much Irving's attitude about his work — it's all a process of figuring it out on the run. Irving, 34, as a student at Hampden-Sydney College in the late-'90s, had an idea to turn a delivery van into something that could take pictures. A few years later, he bought an old Postal Service box truck off eBay, drilled a hole in the side, got some military surplus lenses from a place in Pennsylvania (one came from a submarine's periscope), bought light-sensitive photographic paper by the hundred-foot roll, and set out to document some of Richmond's well-known urban decay.

With every step of the process requiring significant upper-body strength, he knew he'd have to keep things as simple as possible. One of his first revelations was a real leap for any photographer, and would inform the rest of his work: He'd take the pictures while inside the truck. “Your mind thinks when you take a picture you should be outside the camera,” he says. “I think when you actually work inside the camera, it's so much more clear to you.”

He would duct tape 8-foot sections of the photo paper to the wall of the van opposite the lens and begin exposing. After the exposure, he'd turn the inside of his camera into the darkroom, doing all the chemical work inside and then dragging the developed negative (both his negatives and his prints are produced on photographic paper) out into his yard to hose it down. Along the way, the negative would collect tears, bits of grass, strips of duct tape. The edges of the images would be swirling shades of color, places where the splashed chemical got part of the image, or none at all — Irving calls it the “squirrellyness.” The chaos of the process is seen here, framing an image of the city that feels life-size. The roughness is what's further guided his work.

“A lot of it I've kind of learned to leave to the gods,” he says. “The more I let go, the more interesting the work is.” The grass, duct tape, the tears and handprints — these have become the work to Irving. A piece of paper had to travel miles to catch an arrangement of light, and then be flung around and doused with chemicals: For Irving, the life of the photograph is in the living it had to do to become an image, negative or otherwise. “A lot of high-end fine artists would be so appalled by the treatment I give these,” he says.

Irving took a half-dozen Richmond shots, then sold his truck to finance a trip around the South to tour his new lo-fi aesthetic. That didn't work out for one reason and another, but in the spring of 2006, an advertising agency in Spain sent Irving on a tour. He rented a van, converted it into Europe's largest camera and set off to photograph the whole country. A video production company filmed it: three weeks, 5,000 miles, 75 images. The trip became a documentary, “Landscapes in a Truck.”

Irving lives in Church Hill with his wife, Christy, and his third truck. He's running a small creative shop doing graphic design and some advertising strategy.

When he unrolls a negative, the chemical smell, faint but not unpleasant, fills the small parlor of his house, which is already filled with strange collections — old children's books, knickknacks on the mantle, a yellowed portrait of an old bearded man in front of the fireplace — not a relative; just a good buy at a yard sale or somewhere. A picture of a train car is marked with graffiti. It's huge this close, like a negative image of a whale coming near.

But as big as this work is, as much as he immerses himself in it, becoming part of the camera, watering the negatives on his lawn, it's kept to a small part of his life. His recent Hampden-Sydney show was the first time his father had seen his work. His wife hasn't been in any of the camera trucks.

The current vehicle, an old Mack Tools truck as-yet unconverted into a camera on wheels, was bought for $600 from his uncle's neighbor. The big black thing came with its own squirrellyness — a family of them nesting inside. The truck has been tagged on both sides, big white letters on the black walls. The world isn't waiting for him to make something of it — it's continuing, slowly, to develop.

The kids who did the tagging might have been the same age as Irving when he was shucking oysters for minimum wage at a seafood place called Land Sharks in Farmville, where he grew up. That restaurant has long since gone out of business. What's there now is the J. Fergeson Gallery, at which some of Irving's work now hangs. One image is of a huge bull-shaped billboard on some empty Spanish hill. It, like Irving's latest truck, like the train car in that rolled-up image, has been marked by graffiti, the grass and duct tape of a slowly developing world.

“It all sorta comes full circle, I guess,” he says. S

Shaun Irving's camera-truck photos will be on display at Corporate Museum and Frame, 301 W. Broad St., on Friday, May 1, with a reception 7-10 p.m. The show runs through June 1. 643-6858. Irving will have another show at Art Works in September.