A Cold War classic is revived. The only question is why? 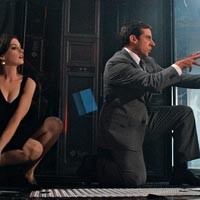 It's 1965. You could catch "Goldfinger" at second-run drive-ins. "The Man From U.N.C.L.E." was in its second season. Four years earlier a superpower dust-up over Cuba threatened nuclear devastation. You can imagine, in short, what gave two 30-something writers the idea that a sitcom about a bumbling spy might strike a chord with the American people. That the two writers happened to be Mel Brooks and Buck Henry certainly didn't hurt. But without the Cold War context, "Get Smart," the five-season television show, would have been inconceivable.

Now comes the puzzlingly timed "Get Smart," the summer comedy-action blockbuster, and a Steve Carell vehicle to boot. Forty-three years from the dAŸï¨«'A+'AŸï¨«ï¨«ï¨«.ï¨«ï¨«•AŸï¨«'ï¨«.ï¨«ï¨«AÿAŸ.ï¨«.ï¨«ï¨«ï¨«ï¨«.ï¨«ï¨«.AŸï¨«'A+'AŸ.ï¨«.ï¨«ï¨«ï¨«A,ï¨«AŸï¨«'A,.AŸ.ï¨«.ï¨«ï¨«�­A,ï¨«Aÿbut of the small-screen original, we certainly have our own set of problems related to botched intelligence. But given the public's revulsion with foreign affairs, topicality is not on the menu for any movie with nine-figure box-office ambitions. (Consequently, it's now quite clear that "Harold & Kumar Escape From Guantanamo Bay" may have a higher integrity quotient than any other current Hollywood response to our present calamities.)
What we have, then, is a satire determined to stay well clear of its natural targets. In place of barbed humor, we get a ton of generic explosions, hairbreadth escapes, bombs in concert halls and other action mainstays that don't really gel with the classic camp comedy worldview. There's nothing to despise here, certainly, but over the appealing performances and kinetic frenzy hangs an air of flailing pointlessness.
The weak link in the chain, naturally enough, is the script, concocted by Tom J. Astle and Matt Ember, the team responsible for the feeble rom-com "Failure to Launch" (2006). To be sure, they should be given credit for trying to reconceive Maxwell Smart, who in Carell's incarnation isn't a button-down nitwit, but rather a crack analyst whose difficulties in the field have more to do with inexperience than ingrained stupidity.
But the film's sometimes beguiling special effects -- a slickly updated CGI take on the irredeemably bug-prone Cone of Silence, for example -- can't offset the sheer unevenness of the gags, few of which rise to the level of those on a typical episode of "The Office," still the prime source of Carellana. Brief hints of inspiration, such as a wan Bill Murray as Agent 13, doomed to live out his life disguised as a tree on the banks of the Tidal Basin, only heighten our disappointment when the movie settles back into its blow-to-the-groin mode.
Agent 99, Max's alluring partner in the field, has been given a weird back story to explain why she looks so young, in spite of being a highly seasoned operative. That's because she's played by a pretty, bland 25-year-old Anne Hathaway ("The Devil Wears Prada"). Doubtless the idea of casting a contemporary of Carell in the role was dismissed out of hand. After all, who would pay to see a 45-year-old woman in a summer hit? (Plenty of people, it turns out, as "Sex and the City" has taught us.) Hathaway, however, an ingAŸï¨«'A+'AŸï¨«ï¨«ï¨«.ï¨«ï¨«•AŸï¨«'ï¨«.ï¨«ï¨«AÿAŸ.ï¨«.ï¨«ï¨«ï¨«ï¨«.ï¨«ï¨«.AŸï¨«'A+'AŸ.ï¨«.ï¨«ï¨«ï¨«A,ï¨«AŸï¨«'A,.AŸ.ï¨«.ï¨«ï¨«�­A,ï¨«Aÿnue to her polished fingertips, never establishes 99 as the rock-solid professional she's supposed to be. If Carell had had someone of sterner stuff to play off of, the script's lackluster repartee might have been given a lift.
The movie's episodic riffs on spookdom are loosely strung together with a plot that resuscitates the shadowy criminal empire of KAOS and its evil mastermind, Siegfried (the venerable Terence Stamp), along with his portly sidekick Shtarker (Ken Davitian, best known as Borat's helpmate). As Max's long-suffering Chief, Alan Arkin injects a bracing dose of spleen into the proceedings, a task that has become something of a specialty for him in his welcome, late-career blossoming. And Dwayne Johnson (The Rock no more) provides the requisite muscle.
Occasionally the film makes glancing allusions to our real-world predicaments. In Max and 99's intercontinental peregrinations they stumble onto a stash of yellowcake. The vice president is referred to as a belligerent jerk. The briefly appearing president (James Caan) is a boorish clown. All told, these elements probably account for less than three minutes. The rest of the time "Get Smart" just pages through the summer movie playbook, selecting this or that until an acceptable run time has been reached. Another pop-culture icon lazily mined for ready cash. Mission accomplished. (PG-13) 110 min. AŸï¨«'A+'AŸ.ï¨«.ï¨«ï¨«ï¨«ï¨«…ï¨«AÿS