The Man Behind the Shockoe Sessions, Carlos Chafin, Wants Folks to Meet Around Music 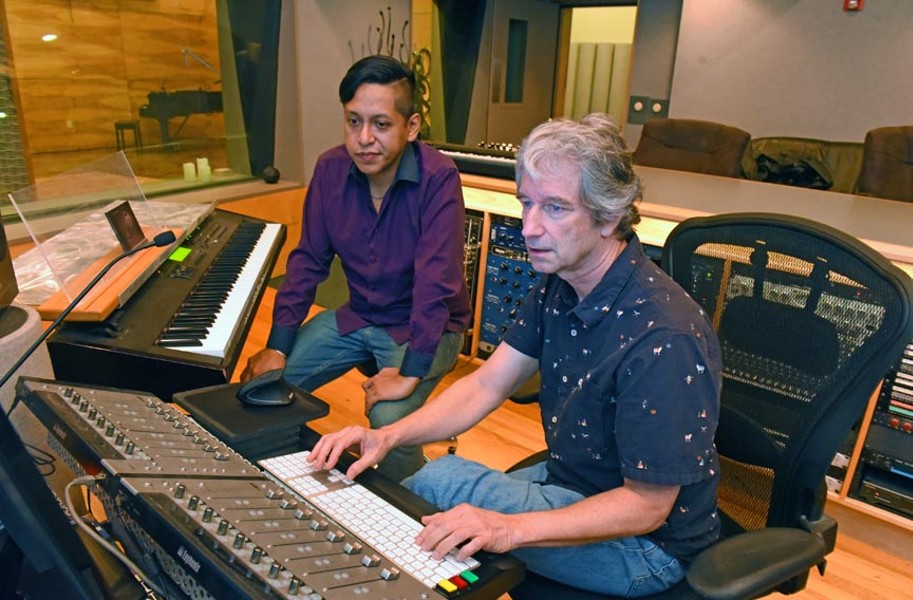 Scott Elmquist Albert Yapur sits next to longtime local producer and session musician Carlos Chafin, at In Your Ear studios in Shockoe Bottom.

Carlos Chafin is a facilitator, a visionary who sees the dots in the local music scene most of us miss and connects them in interesting and unusual ways. A natural alchemist, he's gone from session musician to studio chief, executive to educator, a man who looks to build bridges using music to create new relationships and opportunities in the River City.

I first met him at one of his Shockoe Sessions, an in-studio musical mixer that combines a live concert performance with an informal meet and greet that draws people from Richmond's business, political, technical and creative communities. Chafin is an affable host, easy to talk to. Talking about music energized him, and he seemed to grow more so as the evening wore on. He has always been around music, he says, taking the advice of his studio musician father.

"My father steered me towards studio work," he says. 'He said it was better than being a touring musician because you could have dinner at home and sleep in your own bed every night."

By the time he was 16, Chafin was a session piano player at the old Alpha Audio Recording Studios, where much of the work consisted of advertising jingles. Some of the musicians on those sessions would go on to become members of Bruce Springsteen's E Street Band and a young Pat Benatar sang some of those jingles. The studio was like a second home to the young Chafin. "I knew exactly what I wanted to do at age 11, and I'm still doing it today," he says.

But what Chafin seems to do best is find ways to bring people together. The setting is In Your Ear Studio, the business he started in 1991 with the late musician Robbin Thompson. Chafin is using his studio not only as a business, but also as an agent of social interaction. Take education, for example. In Your Ear just completed the first academic year of its joint venture with Virginia Commonwealth University. Dubbed the AMPT program, an acronym for advanced media production and technology, the curriculum is taught at In Your Ear and offers a certificate in media production. This program was conceived and birthed by Chafin and is a product of his vision and passion.

That passion is on full display in Chafin's concert series, the Shockoe Sessions. The events are held after work, usually beginning around 5:30 p.m. The attendees are emailed invitations and encouraged to come early. There are corporate sponsors from around the city who take turns as unofficial hosts. Usually beer is provided by a local brewery and appetizers provided by local restaurants.

A cross-section of businesspeople, artists and creative types meet and mingle in the hour leading up to the show. It's not an event for wallflowers: You won't find a place to hide. Chafin, the genial master of ceremonies, manages to create a vibe that sparks dialogue. "My idea was to pair people with music they would like," he says. "And people they would want to meet."

The musical palette crosses genre lines. Local bands like folk rockers Third Rail and jazz shamans Doors Wide Open are featured along with solo artists such as Darryl Ellyson. Bluesman Ellyson just released his first album "Been Out Traveling," recorded at In Your Ear with an assortment of Richmond area musicians, including some keyboard work by Chafin himself. "This guy just sort of came out of nowhere and he had all these great songs he had written," Chafin says, grinning. "I had to record him."

Doors Wide Open put on a powerful set. A superb jazz ensemble, if you had told me members were seasoned Los Angeles session players, I would've believed it. "I try to push it as far as I can, musically and artistically," Chafin says. And he backs it up. The Sessions have also featured Rumput, a string band that plays a style of Indonesian street music known as kroncong. "They were amazing. And we had this group, Yeni Nostalji, they were really great. If I had to describe it I would say it was Turkish lounge torch music. My goal with featuring some of these artists is to introduce alternative music to people who are hungry for it."

What's next for the concert series is anybody's guess. Chafin likes to keep an aura of mystery around the sessions. In the process he creates memorable experiences, each as unique as the artist featured. Friendships have started at the Sessions. At the very least, each person goes home having encountered something new. Chafin's genius is that, although he is the architect of evening, he stays in the background, allowing the night to unfold organically.

It is a wonderful thing to see a community come together in these days when outside forces want to polarize us. For a couple of hours at In Your Ear Studios, the filters we see others through disappear. Without the labels, we regain a sense of our membership in the human family. John Sebastian once sang "Do You Believe in Magic?" At In Your Ear Studios magic is always on the menu. S