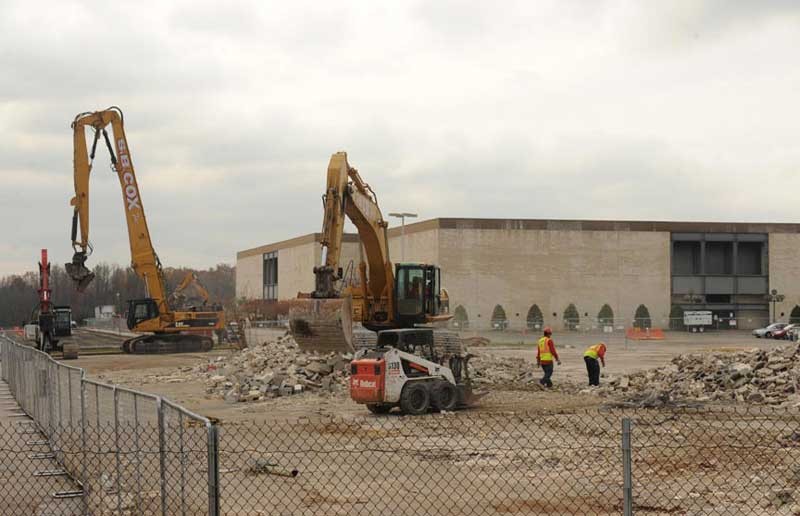 The malling of Richmond didn't begin in earnest until 1972, when Cloverleaf Mall opened on Midlothian Turnpike near Chippenham Parkway.

There were other major shopping centers in the city proper — the Shops at Willow Lawn and Southside Plaza, which opened in 1956 and 1957, respectively; Azalea Mall in 1962; Eastgate Mall in 1968. Southside Plaza and Willow Lawn were outdoor shopping strips, with massive parking lots and sidewalks linking the stores. Both Eastgate and Azalea were enclosed malls, but small, each with about 300,000 square feet. Cloverleaf was different. The mall was twice as big as the others, nearly 800,000 square feet, and it brought an air of fashion to Richmond retail that had been missing since the heyday of East Broad Street.

"The first major interior mall in Richmond is a total failure," recalls George Hoffer, an economics professor at the University of Richmond. "Azalea Mall never developed and it was just a total failure, to the point where it was totally razed. Cloverleaf opened in 1972, in basically a middle-class area, with great access to Chippenham. ... And it was the place to be."

Cloverleaf opened with J.C. Penney and Sears & Roebuck as its first anchors, and a year later added Thalhimers. The mall drew hundreds of thousands of shoppers from across metro Richmond and Central Virginia. More importantly, though, Cloverleaf was a social destination. It featured restaurants, most famously the buffet-style Piccadilly, and in 1974 even briefly exhibited three statues by French sculptor Auguste Rodin.

The mall's developer, Leonard L. Farber of Pompano Beach, Fla., was a retail pioneer who developed dozens of malls along the East Coast. In Richmond, Farber developed Cloverleaf and experienced such success that he decided to build another mall, Regency Square, which outshone Cloverleaf. It was bigger, about 850,000 square feet, and constructed on two levels, with more stores and an upscale ambiance.

Malls were designed to create an introverted oasis of sorts, where time would slip by unnoticed and shoppers had no choice but to traverse the lengthy corridors to get from one place to the next. From the outside, they created a sense of mystery and social intrigue. Until malls arrived, shopping centers advertised their merchants externally, with outside signs and multiple entrances. Passing motorists could scan the centers to decide whether to stop. With malls, only the department stores had outdoor signs — and potential shoppers had no choice but to stop and venture inside. The shift from extroverted shopping design to an introverted one was critically important. Malls, in essence, created customer traps — once inside, foot traffic was dictated by design. Gruen, the architect who designed the first mall, was a socialist from Vienna, Austria, and his mall was designed to strictly control the shopping experience. The anchor stores would be on opposite ends of the building, forcing shoppers to trek between them, which fed them to merchants in the corridors.

At most malls, all of the color went into the storefronts (it's why most mall décor is bland, usually off-white) and there were no clocks, Gibbs says, "because clocks tell you when to go home." Restaurants and food courts were separated from clothing stores because the aroma of food discourages customers from buying apparel. At malls with two levels, escalators were located at opposite ends of the mall, which forces shoppers to walk past most, if not all, of the smaller retailers in the corridors. Another rule of thumb: Storefronts must be designed to remain within sight of customers for at least 8 seconds, the time it takes most people to decide whether to stop and shop.

Gibbs recalls being shocked at the cleverness of mall design while working for Taubman. For example, landscape architects love to design ornamental brick pavers in shopping districts, Gibbs says, but you won't find them in most malls, where nothing is to detract from the retail stores. "If you are looking at your feet," he says, "you're not looking at the storefront."

Over time, however, malls became too cookie-cutter, says Brian Glass, senior vice president of retail brokerage at Grubb & Ellis/ Harrison & Bates. Malls led to the "homogenization of retail" in the United States, he says: "You had a mixture of national chains, and mom and pops, and everybody — they all started to look alike. The anchors all started to look alike, so there was no defining difference between one and the other."

Ultimately there were so many malls, aided in part by the new tax laws, that they ceased being true regional shopping destinations. Most live and die while the neighborhoods around them change. As discount retailing took hold in the mid-1990s, malls also began losing their department-store anchors. Slowly but surely, they lost their fashion.

In Richmond, the remaining malls as a group are in sharp decline. Regency Square has faced financial troubles in the last few years, and last year Taubman Centers relinquished ownership of the mall to Bank of America, its primary lender, because revenues weren't enough to cover the mortgage (Taubman still manages the mall). Virginia Center Commons, which opened in 1991, has been struggling to replace departing retailers in the last two years, including Dillard's, which had two locations at the mall, as well as Old Navy and Ruby Tuesday.

And the mall that started it all in Richmond, Cloverleaf, is being demolished. Last month Chesterfield officials gathered in the parking lot of the mall, which closed for good in 2008, to celebrate the property's redevelopment. Members of the Board of Supervisors took turns swinging a sledgehammer, and officials cheered when a crane knocked a hole in the mall's marquee, exposing steel beams and leaving electrical wires dangling over the front entrance.

Cloverleaf Mall has been dead to Tom Jacobson, Chesterfield's director of community revitalization, since at least 2004, when the county purchased the mall property in hopes of tearing it down and redeveloping the site. In mid-October, before the demolition crews showed up, the longtime urban planner had a hard time finding sympathy for the old, vacant mall during a stroll through its empty hallways. He stops at what used to be the center plaza, under a still-glowing skylight. The mall has been closed for three years, but the palm trees are still here, brown and brittle, lording over a dried-out penny fountain.

"Structurally, this is still a really good building," he says. "That's the sad part."

Most of the area malls were put on notice in 2003, when Stony Point Fashion Park and Short Pump Town Center opened, both featuring upscale department stores (Nordstrom at Short Pump; Saks Fifth Avenue at Stony Point) and multiple, high-end restaurants. But Cloverleaf's fate had already been sealed.

Much of Cloverleaf's demise can be blamed on the massive residential development that occurred in western Chesterfield, leading retailers to head west. But it also was poorly designed, Jacobson says. The mall's access off of Chippenham Parkway was an obstacle — once exiting the parkway, motorists had to navigate across three lanes of traffic within about 100 yards to make a left turn into the mall's main entrance. And behind the mall is about 200 acres of wooded, undeveloped land. Cloverleaf's designers didn't facilitate access to the property behind it, which could have allowed for more retail development around the mall, which likely would have helped it stave off elimination for a few more years. The redevelopment plans include a 123,000-square-foot Kroger grocery store, the chain's largest in Central Virginia, and a mixed-use office and residential community.

Cloverleaf also gained a reputation for being unsafe. In the early 1990s, the mall was known as a hangout for teenagers. There were bouts of violence, rumors of alleged gang activity. And in 1996, Cloverleaf's image suffered a fatal blow: Two employees of the All-For-One dollar store were stabbed to death in a back office. Fifteen years later, police still haven't made an arrest.

Chesterfield Police Chief Col. Thierry G. Dupuis attended the demolition ceremonies Oct. 25 and still recalls the scene. "To me, it's fresh in my mind, just like it was yesterday," he says. Dupuis, who was a shift commander at the time, had the task of informing the families of the victims. He holds out hope that mall's demolition might spark some new leads in the case, but otherwise he's ready to see Cloverleaf disappear.

"From my perspective, I would like to see this as a new beginning," he says.