The Malls Are Alive. ƒ?Ý

Local auditions for “The Sound of Music” bring out the little von Trapps. 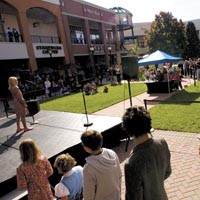 My kid has bed head. Along his part, the hair looks as though it's been turned into wire and bent in exactly the wrong direction. I've pinned him against the side of the van — purse and sweater crushed under my arm — while I run a comb through it. But as soon as I pull the comb through — sproing! — the hair goes back.

Thus begins our morning at the Short Pump Town Center auditions for Theatre IV's production of “The Sound of Music.” Just my son and 521 other young hopefuls have registered for a chance to be one of seven von Trapp children.

Seven children? That's all? It used to seem like so many.

At 34 years old, Theatre IV is in its prime. Its reach is large: With three Richmond performance spaces plus a host of touring companies, it brings live theater to almost 600,000 audience members throughout 35 states annually. But since the recession hit last year, arts organizations everywhere are struggling and Theatre IV is no exception.

When the associate artistic director, Chase Kniffen, floated the idea to hold public auditions to cast the show, it just made sense. Putting local kids onstage always generates excitement among theatergoers. Why not add a prologue and let audiences observe the whole process? Hoping to build the pool of both auditioners and paying audience members, plans were laid for Saturday, Nov. 7. A special page was added to Theatre IV's Web site for signups. Accompaniment tracks for five songs from the show were made into digital files. Each auditioner was asked to choose one, then download and practice it.
The response was overwhelming: 522 children signed up. A second day of auditions had to be added for the overflow.

Judi Crenshaw, Theatre IV's publicist, handled the parent e-mail. No small feat. At last count, she had 1,288 e-mails in her dedicated e-mail mail folder. She fielded an array of questions: What should my child wear? Which song should he choose? What are his or her chances of being cast? Can he or she sing something that isn't on this list?

Richmond has a thriving theater community; it only makes sense that we'd also have a thriving community of nervous stage parents.

Not me, of course.

We sign in at a table staffed by cheerful, efficient women — one of whom is the director's own stage mom, Bev Kniffen — and the children are photographed and measured. Tracking heights will help with casting decisions, because the seven siblings are stepped in size.

Children line up on one side of a small stage; parents are asked to await them on the other. Immediately offstage is a sound system. On the stage is a speaker for the music and a microphone. That's it. It's all about the child. And the song.

Seth Lyons, 10, steps up and belts out “Do-Re-Mi.” He's terrific, and his mother beams offstage. Lyons has already been in a production of “The Sound of Music,” at Chesterfield Children's Theatre, playing Kurt. His mother says he practiced so much for this audition that it almost got on her nerves. You can tell she doesn't mean it.

There's a tiny girl onstage who can't be a day over 5. She's perfectly turned out: blue leggings, blue dress and bouncy blonde hair pulled back in a blue headband. The intro for “Do-Re-Mi” begins and she sings — in a key all her own. She's so adorable it hardly matters. She finishes with a huge grin, and the crowd goes nuts.

John Alley, 17, sings “Sixteen Going on Seventeen.” Dressed in black, he looks dashing and sings beautifully. His younger sister, Amanda, follows him, and he roots for her offstage. Eric Pastore, 13, hits “Edelweiss” out of the ballpark — though his mom insists he sounded even better at home.

My son steps onstage. He's 9, but right now he just looks so little. The mike is adjusted down so he can sing into it. As his music begins, I notice my pants legs vibrating. Oh. It's because my knees are shaking. My kid is far braver than I. He delivers “Do-Re-Mi” without a hitch — and in spite of the hair.

By day's end Kniffen, who will direct the show, Sandy Dacus, who will serve as music director, and Theatre IV founders Bruce Miller and Phil Whiteway have heard 108 versions of “Do-Re-Mi”; 99 of “My Favorite Things”; 68 of “Sixteen Going on Seventeen”; 42 of “Edelweiss” and 35 of “The Sound of Music.” They've seen children from all over Richmond, as well as Charlottesville, Virginia Beach, Williamsburg and Washington.

They're pleased. “This is the only way to do kids' auditions,” Kniffen says. “It has widened the casting net in a larger way than ever before.” It also keeps things fair, he says, because everyone had equal access to the vocal tracks and could rehearse for weeks if they chose. Dacus appreciates not having to play piano for the auditions, so she can really listen to each child.

Dacus and Kniffen have a huge task before them: Reduce more than 500 von Trapp hopefuls to seven von Trapp children. The show calls for real singers who can not only sound good alone but also hold a harmony part. There will likely be several rounds of callbacks before casting is complete.

Here's hoping the kid with bed head makes it through.

“Music” by the Numbers

Children signed up to audition: 522
Scheduled for Short Pump: 352
Scheduled for “overflow audition”: 170
Number of children in cast: 7
Cancellations because of
… flu: 43
… fear: 5
… signing up without parents' permission: 6
… no stated reason: 16
No-shows on audition day: 24