The Making of an Olympian 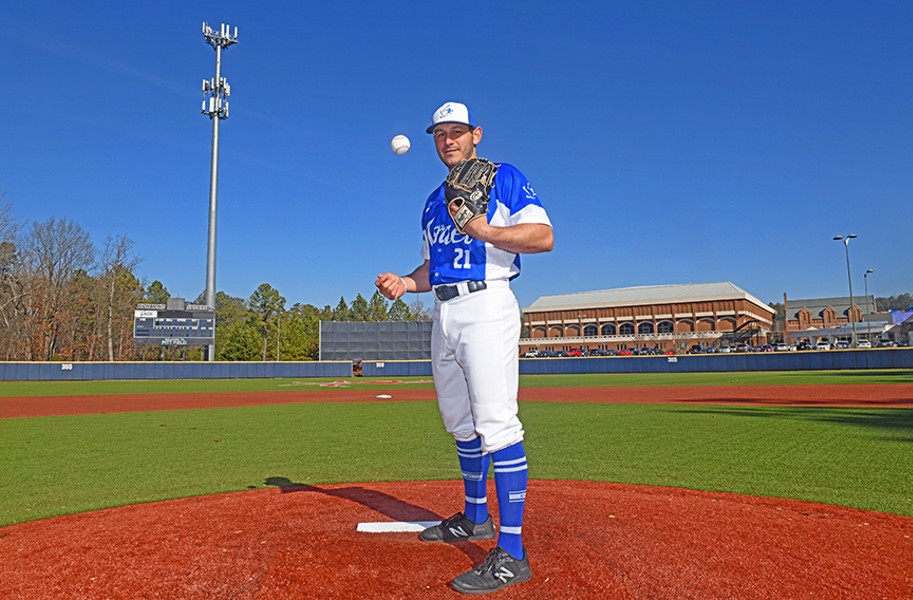 Scott Elmquist University of Richmond alumnus Jonathan de Marte, who played baseball for the Spiders, will compete for Israel at the Tokyo Olympics this summer. He’s standing on the school’s Pitt Field, with the Robins Center in the background.

It’d be tough for a 26-year-old athlete to both live in Scott’s Addition and keep a strict training regimen. The neighborhood has a hip eatery or bar on every other block. But the lure of brewskies has been no match for the grit and discipline of Jonathan de Marte. Since New Year’s, the professional baseball player, a free agent, has been traveling in Australia as a relief player for the Perth Heat in the Australian Baseball League, the country’s majors. And in July, de Marte will be in Tokyo at the summer Olympics playing baseball, a sport that’s rarely on the program.

Baseball and the summer Olympics, what’s that about?

A perceived disconnect is understandable. Although the International Olympic Committee flirted with the sport as far back as the 1904 games in St. Louis, official competition for baseball wasn’t sanctioned until 1992. Then baseball was dropped after the Beijing games in 2008, in which South Korea took the gold. A major reason for the sport not being played is American Major League Baseball’s refusal to free up players during the corresponding spring and summer season every four years. Also, baseball isn’t big in Europe and the continent’s Olympic representatives are influential in programming. The sport isn’t scheduled for the 2024 Paris games or Los Angeles in 2028.

Baseball is being played this year because of its popularity in Japan, hence a courtesy to the host country. Also, women’s softball will be on the roster, with karate, skateboarding, sport climbing and surfing Olympic competitions being featured for the first time. 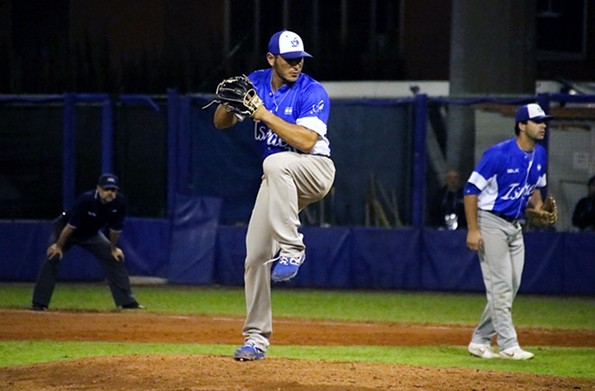 With the United States not fielding a team, native New Yorker and Richmonder Jonathan de Marte was recruited to play for Israel. In spring 2017 during his last year playing at the University of Richmond, Nate Mulberg, the Spiders’ assistant baseball coach, a New Jersey native who had played for Jewish Maccabiah teams and is on the coaching staff for the Israeli Olympic team, knew that de Marte was Jewish and recommended him to Israeli baseball officials. De Marte is one of 15 Jewish-American team members who are either a college or minor league player headed to Tokyo. Two other teammates grew up in Israel, while seven have close personal ties to the country. In 2018 de Marte received Israeli citizenship, a requirement for Olympic completion, and in September was a factor in the team going 4-1 in winning the qualifying competition in Italy to secure the Olympic European-African slot. Losing to the Czech Republic, it beat South Africa, Spain, Italy and the European champion Netherlands. In addition to Israel, among the six teams that have earned one of six slots thus far are Mexico, South Korea and host country Japan.

“All I ever wanted to do was play professional baseball,” said de Marte before leaving for Australia last month, as he discussed his unlikely path to the Olympics over dinner in a downtown restaurant. Weeks later he was contacted on the road with the Perth Heat in Adelaide.

“It’s dawning on us that the Olympics are just seven months away and it’s a rush of adrenaline,” he said, speaking from an outdoor deck where he could smell the smoke of the devastating bush fires” that are wracking southeastern parts of Australia. “We want to keep plugging away to make sure we are in good shape for our sport and careers, and also our best to be in a position for Israel to win a medal.” 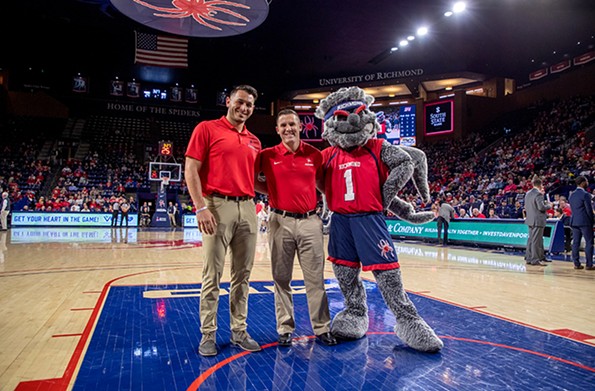 How did New Yorker Jonathan de Marte move to Virginia and eventually be discovered to play baseball for Israel in the Olympics?

In 2011, de Marte graduated from Lakeland High in Yorktown Heights, a town in upstate New York, after a storied high school pitching career. He’d been twice anointed New York’s player of the year and was a two-time New York Sportswriters player of the year. He entered University of Richmond to play baseball and as an undergraduate studied rhetoric and communications. However, in his freshman year the talented and powerful pitcher suffered numerous injuries and underwent a chain of operations. He sat out a season. With encouragement from the university, coaches and fellow players, he stayed on the team and forged ahead while completely reworking his approach to fitness and training.

“At first I’d worked on changing up my arm action and delivery of the ball as an infielder. This was followed by research and slowly beginning to change my training style. I focused more on movement rather than always worrying about strength,” he says. “I also began to make new movements a part of my daily routine, structuring these based on the load on my body on a given day from pitching, playing the infield, or other training.” 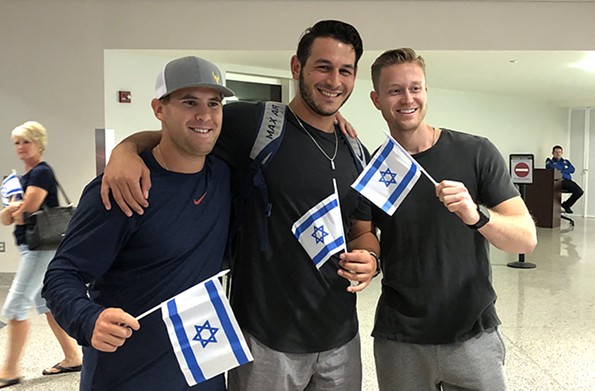 Things clicked. In his sixth, and final, season as a UR graduate student studying human resource management, the 6-foot-1-inch, 205-pound team co-captain was a standout.

“Without question, Jonathan was the hardest working, most devoted student athlete I have come across,” says Spider assistant coach Nate Mulberg, who joined the baseball program in January 2017, the beginning of de Marte’s final season. “This guy basically made himself a hitter, wanting to be better in grad school. He was constantly working, always educating himself on best practices. I can’t say enough about what he achieved.”

But he wasn’t drafted. Says de Marte: “I’d had plenty of exposure to plenty of teams, but they asked: ‘What are you going to bring us at age 23 with multiple injuries and five surgeries for arm, elbow, shoulder and a double hernia?’”

De Marte was undaunted. “I decided not to stop after my sixth and a final year at Richmond, all I wanted to do was play professional baseball. I wanted to enjoy it as much as possible on a given day, whether from pitching, playing the infield or other training.” 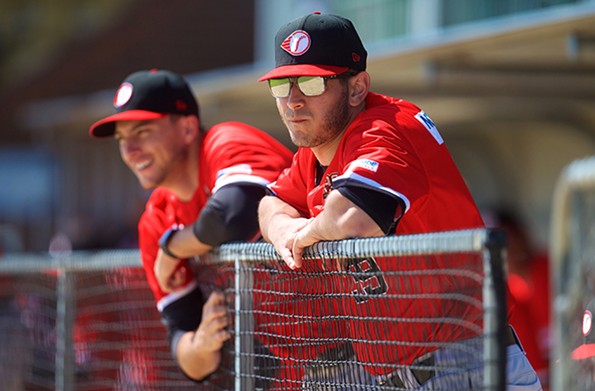 His goal was to play independent ball as a free agent and he gave himself a couple of years. After college he played for a season with the Normal Cornbelters near Peoria, Illinois, in the Frontier League, and for the York, Pennsylvania, Revolution in 2018. Last year he was with Les Capitales de Quebec in the Canadian-American League. He also supported himself by coaching in Richmond and points east.

The close of Perth’s current summer 2020 season concludes within a few weeks and de Marte seeks to be picked up by another team before heading for training with the Israeli Olympic team.

Jonathan de Marte credits his father, Vinnie de Marte, a criminal defense lawyer, and his mother, Dorrie Derfler de Marte, a probation officer, with zeroing in early on his athleticism and interest in baseball: “They were at everything,” he says. “My father coached me until I was 14.” And although he enjoyed soccer and basketball, they recognized his baseball chops at an early age and the family became unrelenting weekend road warriors. His dad’s Toyota Sienna and mom’s Ford minivan racked up considerable mileage as they shuttled their prodigy from their Westchester County home, 35 miles north of New York City, to countless practices and games.

“From when I was nine, we traveled the East Coast from March to early November. I never got burnt out. I always played up in age groups. I learned from those guys and that helped me grow.”

As de Marte developed, it became clear that he had a very strong arm. In high school his stats included a 1.22 ERA with 59 strikeouts and five walks in 40 innings. As a batter, he hit .492 with 20 runs batted in. During his years as a Lakeland Hornet, in addition to twice being named Gatorade high school baseball player of the year for New York, he was the 2010 Louisville Slugger of New York and a 2011 Louisville Slugger All-American.

Dorrie de Marte was keenly aware that much of her son’s travel and baseball activity occurred on Saturdays, the Jewish Sabbath. 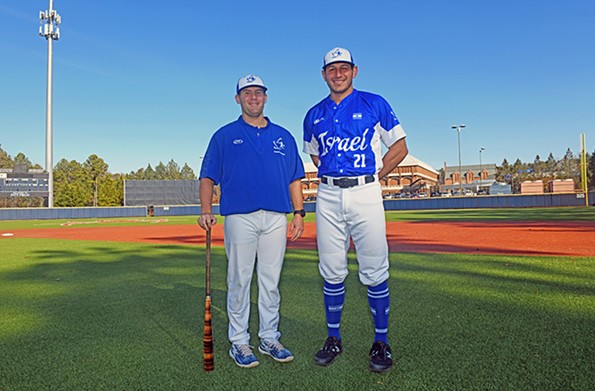 “She’d remind my father and me of Sandy Koufax,” de Marte says, invoking the example of the powerful Brooklyn Dodgers and Los Angeles Dodgers pitcher, now 85, who is Jewish. The Brooklyn native famously sat out a 1965 World Series game to observe Yom Kippur, a high holy day. Koufax returned to the mound after the holiday to win the championship and burnish his status as a sports and Judaic icon.

Jonathan de Marte says that his 23-year-old younger sister and two brothers — triplets — while supportive of his budding career, must have tired of attending so many games. But the elder de Martes apparently shone ample attention on developing the trio’s individual talents. Matthew, also a solid young baseball player, uses his game smarts for the Los Angeles Angels where he is an assistant for strategy and advance recruitment. Julie and Anthony were drawn to theater and dance — she helps manage a nonprofit New York-based performing arts program and Anthony is an independent dancer, choreographer and director.

As a teen, Jonathan de Marte held his bar mitzvah at Temple Beth Am in Yorktown Heights and was in attendance some years later when his siblings had a joint b’nai mitzvah.

Eric Holtz, manager for Team Israel, who was scouting the East Coast for candidates to fill the Israeli roster, had long known of Jonathan de Marte’s baseball prowess. In fact, Holtz’s son and de Marte had played against each other in college. But initially he was unaware that he was Jewish. It was assistant Spiders baseball coach Nate Mulberg who knew that de Marte was Jewish and recommended him: “Holz had not even thought that de Marte was a possibility.”

De Marte remembers the call from Holtz: “He says, ‘You don’t know me, but I feel like I know you. If you’re healthy and ready to play you can pitch for the team.’”

But that was just the beginning of a long process, de Marte explains. “You have to make aliyah, which means going up to Jerusalem. I sought a letter from my rabbi who said, “We’d love to help out.” He then applied and gained Israeli citizenship.

Now de Marte’s parents will have the opportunity, if not the thrill, of making their longest trip yet for their son’s baseball career. They have booked plane seats for Tokyo.

“On the field Jonathan is focused and driven, but off the field he is ethically driven, sincere and nice,” Mulberg says. “Often arrogance or ego can come with someone of his talents, but he’s the guy who’ll sit down with the guy in the corner of the cafeteria who’s eating alone. He’s so down-to-earth.”

“Personally, with all the conflict in the world, I’m aware that I’m not only representing the United States, but a country that is very close to the United States. Therefore, we can bring people together on an athletic and positive basis,” de Marte says. “I feel an even greater responsibility to prepare myself as best I can by working hard and smart because I know that winning gold would mean so much to a small nation with a relative lack of sports exposure.” 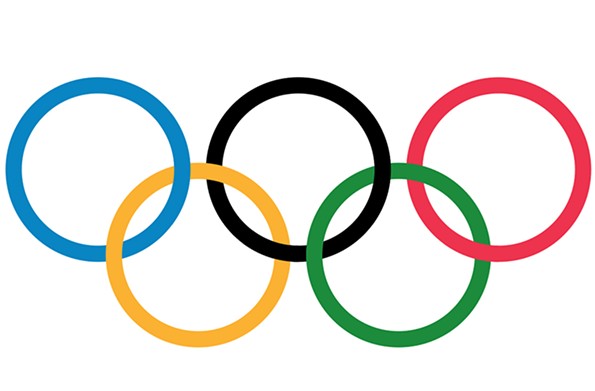 Spiders at the Olympics

Jonathan de Marte and Nate Mulberg are the fifth and sixth University of Richmond Spiders to participate in the Olympics, something they credit the university and its athletic department with fully supporting them.

At the 2008 Olympic Games in Beijing, New Yorker Sarah Mergenthaler (‘01), represented the United States in sailing. She finished 12th with team partner Amanda Clark. Mergenthaler is a multitalented athlete who had excelled at Richmond on the women’s soccer team and in javelin on the track and field team.

UR distance star Hillary Tuwei (’80), who won the Richmond Marathon in 1979, twice made the Kenyan Olympic team, but was thwarted from running due to his country’s boycotts of both the 1976 Montreal games and the 1980 Moscow competition.