The Lure of Spring

When the fish are running and biting, anglers from all walks of life are happy to cast their lines from the shores of the James River. 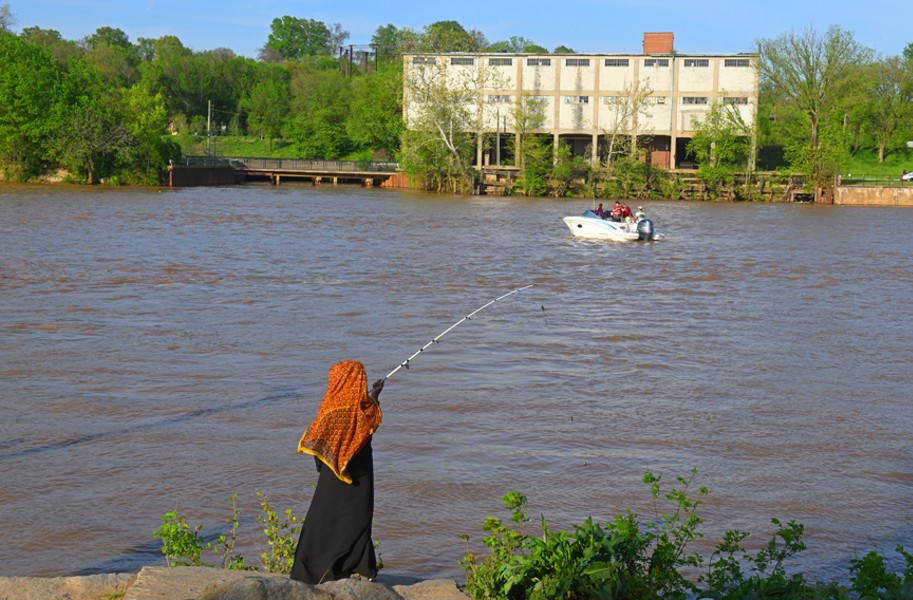 Richmond comes alive in April. Restaurant patios open, the Flying Squirrels return to the Diamond, runners and cyclists flock to the Virginia Capital Trail and we get a blissful few weeks of breezy warmth before the summertime mugginess shows up and stays awhile.

And down by the James River, anglers line the shore for the annual run of migratory fish like shad, herring, alewife and striped bass.

Justin Doyle, community conservation manager at the James River Association, likens it to the iconic spawning run of salmon in Alaska. The anadromous fish we see in the James, which were born in freshwater and spent much of their lives in the ocean along the East Coast, return to the river in the spring, if they make it through dams and obstructions, to procreate and deposit their eggs. Unlike Pacific salmon, they don't die immediately after spawning.

From about mid-April to early May, the stretch of the river through Richmond is a fisherman's dream. Osprey circle and swoop, diving to pluck their next meal from the water, and folks gleefully reel in multihook lines with three or four flapping fish. 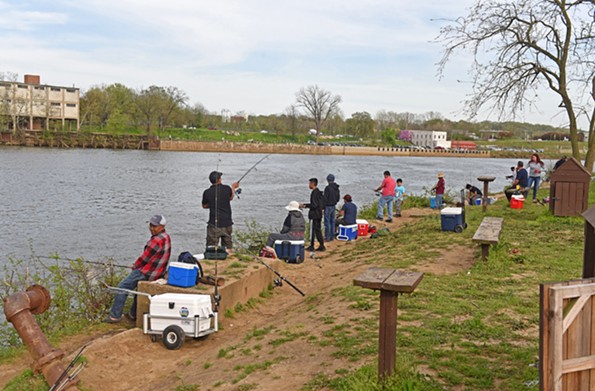 "People love that kind of fishing action," Doyle says. "You just see the banks, both north and south, lined with fishing, as well as a lot of boats out on the river."

Longtime Richmond resident Tricia Pearsall, who's been involved with river conservation efforts for two decades, began fishing six or seven years ago. She and her big, black, fluffy, bearlike dog Pi make their way down to the water several days a week, and she still marvels at how the James, which blurs the lines between urban and wild, is such a great equalizer.

"Sometimes we are alone all day and in the midst of the city, and other times we're with people that are from all walks of life who are, for the most part, just the nicest people you'd ever want to meet," Pearsall says.

While a catch is always exciting, for a lot of folks out there, it's less about the fish and more about the opportunity to sit quietly by the water.

"I always assumed when I was younger that it was just too slow, but boy, am I learning a lot," she says. "By doing, and by taking tips from friends who are much better fishermen than I."

She's found the fishing community to be kind, open and eager to help. Her advice to anyone who wants to get into the activity is to purchase a fishing license required by the state Department of Game and Inland Fisheries (prices vary), invest in a rod and reel and then just head to the water and start talking to people. She describes Richmond anglers as "free with their knowledge," happy to share their expertise on water heights and temperatures, wind impacts and fish patterns, along with the basics like how to cast a line. Strangers have offered her tips on which bait to use for certain species, and she recalls fishing off a jetty when a boater paddled up and pointed out a different spot where she'd likely get more bites. 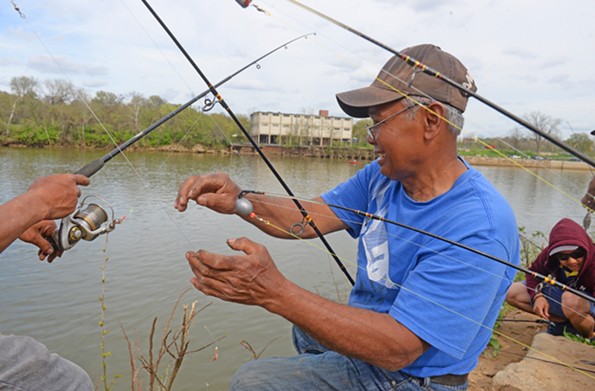 Ancarrow's Landing, a boat launch and fishing park across the river from Rocketts Landing, is one of the most popular spots this time of year. Especially when the weather's nice, at any given time dozens of families can be found hauling camping chairs, coolers, fishing gear and tackle from the parking lot to the tree-lined water's edge. It's a colorful and joyful scene, and here are a few of those faces and their stories. 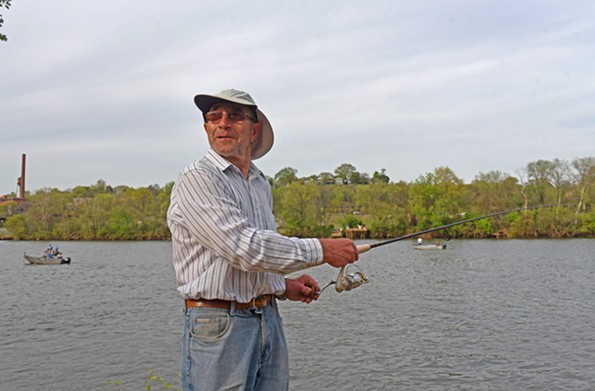 Yakov Gurshpun has been in Richmond since the early 1990s. A native of Kherson, Ukraine, he and his family followed his sister-in-law to the states after she was evacuated from Chernobyl following the nuclear disaster in 1986. He retired from his career as an electronic technician seven years ago, and when he's not running around with his grandchildren, ages 7 and 14, he finds peace by the water.

Gurshpun says he's always had the patience an angler requires. So after a friend taught him the basics a few years ago, fishing became his go-to hobby. Occasionally friends or family will join him, but he certainly doesn't mind getting away from the fray and being out there on his own.

Donning a khaki-colored fishing hat that flaps in the wind, the 73-year-old breezily casts a line over the bushes lining the shore and into the water below. With the rod in his left hand he gazes at the river and slowly reels in the line, which has a juicy earthworm at the end. When asked about his approach to fishing in the James, he shrugs.

"Sometimes I reel it in, sometimes I let it stay," he says simply.

Both methods seem to be effective for him, and it's not unusual for him to return home with a packed cooler. He says he often shares his catches with family and neighbors, but the ones he keeps go straight into the deep fryer. 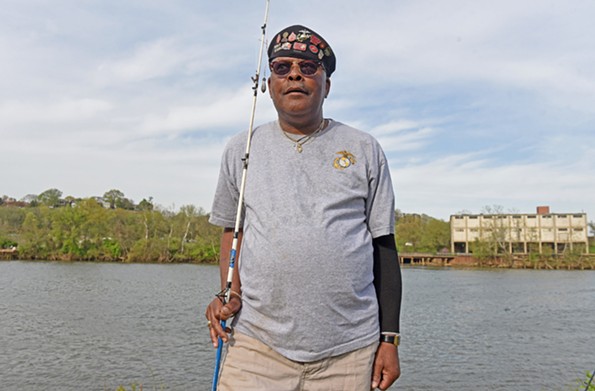 He and his wife Shurea Bowles, who both amiably mention having disabilities when introducing themselves, make their way to the river at least two or three times a week. With their dog Teddy, a tackle box and a cooler full of drinks in tow, they park themselves on the bank for long, leisurely afternoons of fishing.

Bowles, who grew up fishing with her family in Florida, taught him everything she knew about nine years ago. When Clark mentioned the hobby to his service providers at Hunter Holmes McGuire Veterans' Medical Center, he was encouraged to make it a priority.

"It's part of my therapy for my PTSD," Clark says. "It's a way for me to get away from people, places and things." His wife echoes that sentiment, adding that she's always felt a sense of calm by the water, which helps her manage her own anxiety, depression and "aches and pains that just come with age."

The couple naturally eats a lot of fish at home, but whatever comes out of the river usually goes onto Clark's plate — Bowles prefers to get hers from the grocery store. Shad are known as some of the boniest fish in the world, and with her central vision almost entirely gone, Bowles finds it too tedious to pick around the itty-bitty bones.

As the shadows grow longer and the temperature begins to drop, Bowles begins to pack it in around 6 p.m. But the day isn't quite over. The bell, tied to Clark's line to alert him of a bite, jingles enough to get his attention as he packs up his gear. Moving deliberately and with a twinkle in his eye, Clark grasps the fishing rod and begins to reel in his final catch of the day. He lets out a deep belly laugh when a perch that can't be more than 4 inches long flips and flops out of the water. The experienced angler unhooks the palm-sized fish with ease, and turns to the gentleman a few feet away. 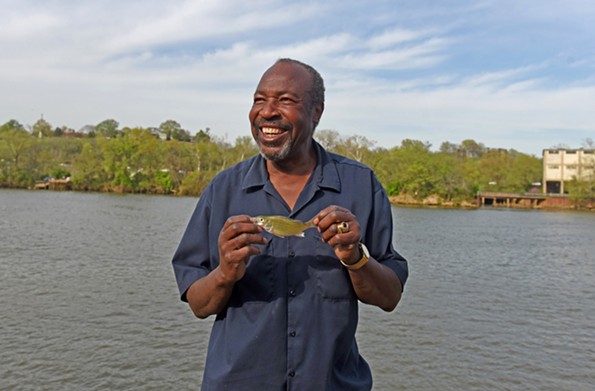 It's been a quiet day for Wilbert White, and he's happy to accept Clark's offering. Inspired by the "giant catfish" he took home the previous day, the 65-year-old Richmond native has been out here since 11 a.m. He smiles broadly, holding the petite perch with both hands and posing for a picture.

White says he'd never met Clark before. But there's a camaraderie by the water, and the two chat easily throughout the day as they bait their multihook lines with night crawlers, squid and teeny fish. A traveling R&B singer with a group called Saved by Grace, White spends as much time on the river as possible, choosing his casting spot carefully and gravitating toward the more populated areas.

"When you see a whole lot of people there, you know they're catching something because all of them wouldn't be down there if they weren't catchin' nothin," he says. Nodding toward the opposite riverbank, scattered with more anglers, he adds that he finds Ancarrow's Landing to be a prime location because there's less for his line to get tangled in.

As his neighbors pack up their belongings to call it a day, White flips on a small portable radio and the voices of the O'Jays circa 1979 croon out the R&B song "Forever Mine."

He waves goodbye to Clark and Bowles, and settles in for the evening. He's still got his sights set on another catfish.

On a breezy, slightly overcast Thursday evening in mid-April, Kamrun Naher, 25, surveys her surroundings from a canvas camping chair about 20 meters from the river.

A copy of "The Outsiders," with bright sticky notes poking out from between the pages, rests on her lap, but she's not getting much reading done. Her attention is split between a small group of men, standing side-by-side and chatting easily with one another at the water's edge, and her 2-year-old daughter, Sathi, who's running around in the grass with Naher's mother-in-law, attempting to cast with a toy pole with a plastic fish at the end of the line.

"I like to watch, but I can't [fish]," says Naher, who adds that she doesn't have the patience herself for the pastime. "My dad likes to come out here for fun, and he gifts the fish to other families."
Naher and her husband, who met in their home country of Bangladesh, moved to the U.S. to be closer to family. Since he moved to Chicago for stable employment, the young couple has only been able to see each other once every month or two. She misses him, but Naher says living with her in-laws provides a level of support and stability that she wouldn't have otherwise.

"We are adjusting," she says, gesturing toward her daughter, who's squealing and running in circles around Naher's mother-in-law. "It's fine."

And she's got plenty to keep her busy: an energetic toddler, classes to learn English as a second language and an accounting course load at J. Sargeant Reynolds Community College. The family, including her husband's parents and brother, who attends Virginia Commonwealth University, often make their way from their Henrico County home to the river for sustenance, both physical and mental.