The writer of HBO’s “The White Lotus” on the inspiration behind one of the pandemic’s most savagely funny shows.

Jason Yokobosky Writer, actor and director Mike White ("School of Rock") is earning great notices for his new HBO show, "The White Lotus," one of the best reviewed shows of the year.

"Let us swear an oath, and keep it with an equal mind/ In the hollow Lotos-land to live and lie reclined/ On the hills like Gods together, careless of mankind."

from "The Lotus-eaters" by Alfred Tennyson

Mike White is pretty used to polarized reactions to his film and television work, but now that his latest HBO limited series, "The White Lotus," is receiving near unanimous praise, it "feels pretty good," he says. That's because this one is more personal.

He still might be most recognized for the popular movie, “School of Rock,” which he wrote and acted in with then roommate Jack Black, but White has steadily forged an impressive career writing for television and movies, from the cult classic “Freaks and Geeks” to the criminally underrated HBO show, “Enlightened,” which was canceled after two seasons. Other feature films have included “Chuck & Buck,” which he starred in, as well as “Brad’s Status” starring Ben Stiller and “Beatriz at Dinner” starring Selma Hayek. But his latest television series is his most glowingly reviewed work yet, for good reason.

"The White Lotus," currently airing Sunday nights at 9 p.m., is being hailed as one of the most hilarious social satires to emerge during the pandemic. White wrote and directed the original six-part series, filming on location at a Maui resort during lockdown. The story plays like an existentialist “Fantasy Island” as it skewers the rich, complaining vacationers while exploring the power dynamics in how they treat hotel staff and each other. The New Yorker described it as “brilliant” and the ensemble cast is wonderful, featuring Emmy-worthy turns from Jennifer Coolidge as an alcoholic, lonely woman trying to spread her mother’s ashes, Murray Bartlett as the suave hotel director who falls off the wagon (spectacularly) due to his mounting disgust with the guests, and Steve Zahn as the emasculated husband of a major female chief executive.

White, whose father was a ghost speechwriter for Jerry Falwell Sr. and Pat Robertson before coming out in the ’90s, is a huge reality TV fan. He even competed on popular shows such as “Survivor” and “The Amazing Race.” Last week, I caught up with him while he was driving his beloved rescue dog across country to visit a friend in Florida -- and we talked about his new show.

Style Weekly: Before I start in with “Lotus” questions, I wanted to mention “Enlightened” and particularly that episode, “The Ghost is Seen.” Just fantastic, moving stuff that worked so well. Did that episode mean anything special to you?

Mike White: Awesome, thank you. Oh yeah, definitely. That was the one that focused on my character. It was the first time I had written something that I was so front and center in. I felt very vulnerable about that episode, so I was happy that it landed for people. Also working with Molly [Shannon], she’s a close friend of mine and I love her. So it was one episode that I was really proud of.

Watch a splice of the intro and conclusion to that "Enlightened" episode.

Is there a chance “Enlightened” could be revisited?

Well [HBO] said they’d be open to another season, or a one-off movie or something. I’m tempted, but I also feel a little like the culture’s changed so much. Amy [Jellicoe, Laura Dern’s character] at the time was a social justice activist, so I feel like I’d have to come at it from a different way and I haven’t figured that out just yet. Maybe Amy is head of HR at Abaddon. The characters and Laura are meaningful to me, but it feels like the ghost of Christmas past a little bit. I don’t know ... never say never.

The characters are so well observed in “The White Lotus” and your writing feels empathetic even while it's gleefully eviscerating them. What’s the most important part of the process for you when creating these characters?

Well, I wanted to have fun with them. There’s a lot of comedy in “Enlightened” but with the voice-over, it’s a little heavier and poetic or sincere. I don’t know, maybe it was the mood I’m in lately, but I wanted to be a little more blood-in-the-mouth, more acid. At the same time, I feel like when satire is hitting easy targets and the characters feel very obvious, then it can feel like an empty experience. It’s fun for me to think about types of people that I might judge, or parts of myself that I want to reject, then try to investigate why I have these feelings and try to build out characters that are more dimensional.

I always find it funny that people who watch these shows are like, “These characters are so unlikeable.” I’m like, “Have you ever watched reality TV, or been around people?” People can be annoying, selfish and at the same time very human, so there’s pathos there too. Like the character, Shane, who is mad about his room on his honeymoon. There’s times I’ve been that guy – where I’m like, “You said we could get into our room at 2 p.m. and it's 2 p.m.! I paid for the room” [laughs].

Growing up in Pasadena, Ca., did you ever work a job where you catered to the wealthy?

[Laughs] Well, I grew up in a moneyed community. My dad was a minister and my mom a teacher. I went to a very preppie prep school but I was one of the less rich people. They had cotillion balls, debutants, country clubs, we weren’t members or ever invited to those things. But a lot of my friends growing up were from these rich families and it created a complicated relationship for me. Part of me wanted what they had as far as material things; they thought they were better than me because they had those things. But also my parents were very loving and present. And you could see how the material things were a substitute for something they wanted that I had. So I guess I am kind of interested in the psychology of rich people. The characters in this show – you can see how the money is not necessarily making them happy, it actually can be an obstacle to personal growth.

A majority of critics love the show. The worst things I could find were a few saying, “Oh great, another HBO show about rich white people. Or, I hope he doesn’t lose track of the workers, etc.” How do you take that criticism?

I think it's fair to talk about that, but it can feel less about the quality of the show and more about reading it through a certain political and cultural activist prism – which is fine. But there are a lot of ideas in the show, it’s not just the upstairs-downstairs part. I find it interesting they can’t see past that to other parts of the show or discussion.

But with virtuous critics I just think, if you’re giving good reviews to Apple and Amazon shows where Apple is like, you know [laughs] literally working with China to crack down on political dissidents. If you’re going to make a virtuous stand against a show, maybe scratch a little deeper than just the representational aspects. There’s actual real life or death stuff going on in the world if you want to make a stand.

But I’ve learned over the years, it's good to hear criticism. For me to get churlish about someone having a critique ... I do think it's important to read bad reviews without getting defensive and try to understand where it's coming from.

I’m so used to polarized reactions to stuff I’ve done, I’m kind of amazed when people get it. This is about as good a response to anything I’ve done. “School of Rock” was popular [it grossed over $130 million on a $35 million budget, spawning a Broadway musical] – but this one was more me and it feels pretty good.

Yeah, Hawaiian music is naturally warm, like with slack key guitar. I wanted to do something bipolar so it would have warm Hawaiian needle drops and makeshift tropical sounds [a cognitive dissonance] that he delivered in spades. I wanted it to sound like rich, white, good-looking people eating dinner but you feel like there’s going to be a human sacrifice later. 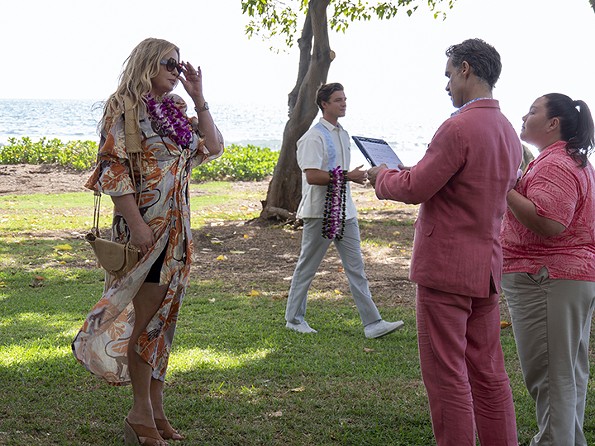 How did you know Jennifer Coolidge would be so great in this? She’s known for the ditzy blonde stereotype from the Christopher Guest comedies, but she cuts much deeper here as an almost tragic figure.

I’ve been pretty good friends with her for 15 years. It’s kind of like how it was with Jack Black, I knew him as a friend and I was like, there’s all these sides to him people don’t see. Jennifer, similarly, has that depth. She’s just a very compelling person and she just needed the right part to really show all these colors I see. Depth is something she doesn’t really get to do.

Any future projects you can mention?

Well, we’re waiting to see if we can do another season of “White Lotus.” That’s going to determine what happens next. But I do have other things I want to do.