The odds may be against her beating GOP favorite George Allen. But Jamie Radtke still is here. 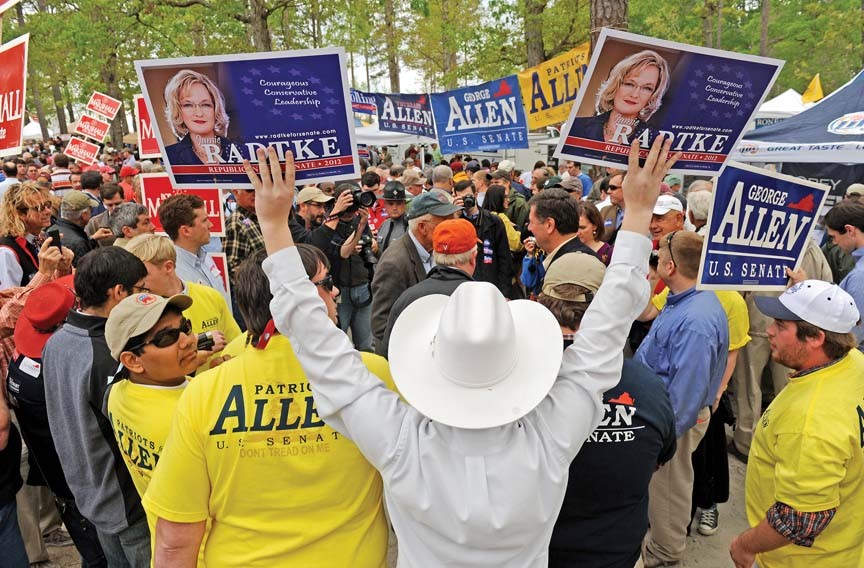 Campaign years are like dog years — a lot can happen in 12 months.

A year ago Jamie Radtke had a small tent on the outskirts of the Shad Planking, Virginia's annual political beer fest in the Wakefield woods. Now she has the biggest presence at the event: an enormous — secondhand, she's quick to point out — RV emblazoned with her face.

A year ago Radtke wore a striped blouse and white pants. She looked very garden party. Now she's in jeans, cowboy boots and a fitted red blazer — with a "Guns Save Lives" sticker. She looks tough.

Last year she had to tell people who she was. This year they come looking for her.

"Of course, it'll be a hard road for you," Robinson says. "But anyway, hope ya win."

"I'd love to have your vote," Radtke says to Robinson and his companion. "It would get me two votes closer."

Radtke has a magic number in mind: 200,000. If she can get 200,000 votes June 12, she says she can win the Republican primary for the U.S. Senate and move on to challenge the Democratic candidate, former Gov. Tim Kaine. She believes she's what voters are looking for: a candidate who's socially and fiscally conservative, without the taint of Washington.

The Republican powers picked their guy a long time ago: former senator and governor George Allen. Radtke, the former president of the Richmond Tea Party and chairwoman of the Virginia Tea Party Patriot Federation, never was on the radar.

Yet Radtke refused to go away. After some doubt about whether she could collect the 10,000 signatures needed to run, in March her campaign submitted more than twice that number. In April the State Board of Elections announced that her name would appear at the top of the ballot (a coveted position, chosen by random draw). After being denied the chance to participate in December's first big debate between Kaine and Allen, Radtke will appear at all three debates being held this spring by the Republican Party of Virginia.

Does Virginia's tea party have the power to push her into the Senate?

The group has been struggling to figure out what role it should play in this election, says longtime Richmond Tea Party member Barry F. Isenhour. "This has been the biggest problem with the tea party," he says. "The average tea party person hates, detests, thinks it's dirty — whatever word you want to associate — the word 'politics.'"

But if the tea party wants to continue to be heard, it must act to put people who will listen in power, Isenhour says: "It's called politics."

Initially, he says, the Richmond Tea Party decided against endorsing any candidates. But Allen used that to his advantage, announcing a list of tea party members who supported him in December. His campaign later retracted several names of people who said they never agreed to endorse Allen.

Making that political call was necessary for the party, Isenhour says: "It has to evolve."

Since it emerged in 2009, the tea party has been successful in shifting the political debate toward a balanced budget and smaller government, says Quentin Kidd, chairman of the government department and director of the Judy Ford Wason Center for Public Policy at Christopher Newport University.

"But I think as we go forward, their influence will wane," he says, because mainstream Republicans have taken up the rallying cries as their own.

Allen's an old hand at speaking the language of the tea party, Kidd says — he has a knack for "reaching out behind him for a big hunk of red meat out of the ice cooler and throwing it to the crowd." At the Shad Planking, Allen derides the "bloated, nanny, meddling federal government" and "big-government programs like Obamacare," winning applause.

But Allen has at least one problem: His eight years in Congress give his opponents ample opportunities to point out his votes for earmarks and big spending.

"There's just a level of suspicion there," Kidd says. It's not enough to make Allen worry about winning the nomination, he says, but it is enough to make Radtke and challengers believe they have a shot.

In Kidd's opinion, the Republican challengers don't have a chance — unless, he says, "there's a major gaffe, or something that comes out of the blue." Allen's 2006 Senate campaign was unexpectedly derailed after he used the word "macaca" in referring to an Indian-American volunteer for his opponent, Democrat James Webb.

But Allen would have to repeat that moment this time around to lose the Republican nomination, Kidd says. "That's the only way I can see a Radtke or a Marshall capturing him, or coming close to capturing him."

Perhaps because of this, Allen's keynote speech at the Shad Planking — traditionally laced with jokes about other candidates — is vanilla pudding. He doesn't even mention Radtke's name, let alone Kaine's.

"Radtke!" a man bellows from the back.

It isn't the answer Hager's looking for. He repeats the question. A few people in front call out "Allen" and "George."

Allen is a winner, Hager says. "George will represent our conservative values in Congress." S